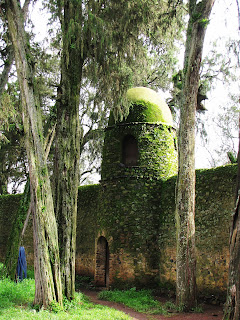 One of  Ethiopia's most interesting historical sites, the city of Gondar once the old imperial capital, contains a World Heritage site of a large complex of castles and palaces behind ancient plant covered walls. Sometimes referred to as the Camelot of Ethiopia, the castle area during July's rainy season was covered in brilliant green mosses and luxuriant foliage, and for me evoked a sense of being in Middle Earth: Arwen or Aragorn could have ridden through the grounds and not looked out of place.
The complex consists of several castles and palaces, one of the largest and most ornate is Fasilides' Castle built in 1640 by King Fasilides.
Iyasu Palace has suffered damage from earthquakes and during WW2, when British troops captured the area from the Italians and brought about the end of their occupation of Ethiopia.
50 Birr or around $10 gets you admission and time to explore all the complex.
As pictured below, the Fasilides' bath is still in use, but undergoing renovation when we were there during the rainy season. This is in another part of the city and you need to pay separately.
﻿

On http://budgettravelerssandbox.com/ Nanci once again has a wonderful photo up. Check it out, and follow the links to all the other photo contributions for Travel Thursday Photos!
And please Stumble, Tweet or Facebook this with the share gadget below.

Love how the ivy or vines have grown up over the smaller buildings, great shots and interesting history.

Love visiting places through others where I probably will never get to in this life time. Nice pictures

Beautiful photos, Jim. I never would have guessed this was in Ethiopia in a million years! I would have thought somewhere in England or something. What a fascinating place to visit.

That's a very interesting castle -- thanks for the information and great pics!

Hi Eileen, thanks and you can come travelling here with me anytime. 30 years ago I could only dream of the places we have been to. But today travel to all those places I would have written on a bucket list then, are a reality. So you never know what is down the track of life. Keep aiming for it!

Pretty photos. I too would have never thought that there were castles in Ethiopia of all places.

Thanks so much for sharing.

Wow, I had no idea Ethiopia was so lush or had castles. Thanks for posting this.

I would love to visit an authentic medieval castle, I never thought Ethiopia would have one like this, thank you for sharing this Jim.

Wow ! Me, too. I never imagined a photo like this could be captured in Ethiopia !

Very interesting castle and one that I wouldn't have thought was in Ethiopia! Love how all the vines are growing on the castle. Very beautiful.

Great shots Jim. I have never associated castles with Ethiopia!