Death Of An Idealist.

“A seagull wings across the sea
Broken silence is what I dream
Who has the words to close the distance
Between you and me.
Asimbonanga.”
These words still echo in my consciousness- unforgettable -inscribed for all time in my memory they jumped to the fore when I was advised I am included on a list of recipients to receive an author-signed copy of the biography of Neil Aggett. Brian Sandberg, a classmate and friend of the young Neil Aggett, has honoured me so.
Music of South Africa fascinates me, and no song more  than “Asimbonanga”.
Johnny Clegg’s 1986 “Third World Child ” LP's tribute to South Africa’s father- Tata Nelson Mandela – has a spine-chilling roll call of anti-apartheid activists who died in security police cells. I always wondered who Neil Aggett was- his name stood out amongst the black martyrs of Steven Biko and Gloria Mxenge.
Let no one sing "Asimbonanga" without including Neil Aggett's name. 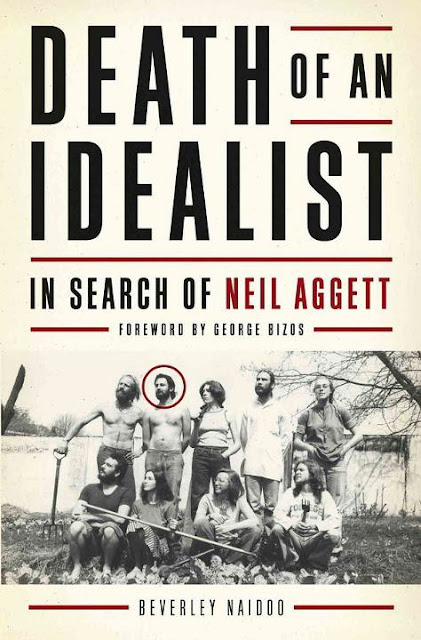 
Death of an Idealist: In search of Neil Aggett is the story behind the only white detainee to die in custody of apartheid’s security police. A medical doctor who worked most of the week as an unpaid trade union organiser, Neil Aggett’s stark non-materialism, shared by his partner Dr Elizabeth Floyd, aroused police suspicions. When their names appeared on a list of ‘Close Comrades’ prepared for ANC leaders in exile they were among a swathe of union activists detained in 1981.
Beverley Naidoo traces the transformation of the youngest child born to settler parents in Kenya at the height of Mau Mau resistance to colonial rule. The book explores the metamorphosis of a high-achieving, sports-loving white schoolboy into the 28-year-old whose coffin was followed by thousands of workers through Johannesburg to his grave. The extraordinary funeral and the preceding national work stoppage were a watershed for trade union unity.
First-hand interviews reveal the fraught, intense world of activists inside the country in the late ‘70s and early ‘80s as the ANC-in-exile pushed to link with emerging black unions. Neil’s non-materialism and his concern about to whom union organisers should be democratically accountable still demand engagement today.
Poignant, personal stories run through this fully-referenced biography of a stoic, stubborn, principled thinker who became a militant yet gentle activist. They include the huge rift with a dominant father who later ploughed his savings into his son’s inquest, funding a top legal team led by George Bizos SC who offers the Foreword to Death of an Idealist.
BEVERLEY NAIDOO was born in Johannesburg where she went to Parktown Convent and the University of Witwatersrand. She was detained under ‘90-days’ in 1964 before continuing her education at the University of York, England. She holds a Ph.D for research into British teenagers’ responses to literature and racism, published as Through Whose Eyes?
Beverley began writing in exile. Her first two books were banned in South Africa until 1991. She has written novels, short stories, poetry and plays. Her many awards include the Carnegie Medal for The Other Side of Truth and honorary degrees for a body of work. Beverley and illustrator Piet Grobler (co-creators of a South African Aesop’s Fables) were the 2008 South African nominees for the Hans Christian Andersen Award.
In Burn My Heart, Beverley explored in fiction the colonial world into which her younger cousin Neil Aggett was born in Kenya during the Mau Mau resistance. Death of an Idealist: In search of Neil Aggett is a fully-referenced biography exploring his transformation into the militant yet gentle doctor-cum-union activist who became the 51st, and only white, detainee to die in security police custody.

Death Of An Idealist.


How could a child lose their sense of wonder?
When did they lose that youthful dream?
What trauma ripped a young life asunder
To live life crying a silent scream?

All the jagged sharp stones that ever were thrown
build the walls of my prison I have now grown.
All the tears and my fears, I mortar them there
within bars smelted from all the hurts I have known.
The doors close with a crash, the keys I have smashed
no one can enter-
I'm my own person in here
where I'm alone with my cutting friends....

This skeleton I create, you can debate
but these bare bones are the bars of my cell.
My stretched taut skin, so transparently thin
papers the walls of my living hell!
No one can hear, 'cause I'm deep inside where
any sounds these thick walls will quell.
My loved ones I know, will sit through the show
hoping I'm going to mend,
but I've lost control, now stuck in this hellhole...
this plot was written with no end.

I hate your attempts to make me eat
watching me take each mouthful.
Where was your concern when I needed to learn
about giving love and personal respect?
You showed me the way to live in those days
is through pain, sexual abuse and neglect!
I plan your defeat no matter the entreat
you're just pushing against the stream.
If I survive it's because we'll devise
a way to live within this silent scream.

This crisis I create is how I relate
and in my life I know rocks matter.
They can build foundations...
or walls...

Maybe you'll know what this is about. Written while in discussion with some women who are survivors.
I admire them.