This is a guest post written by Mandy Cooper, a Christian writer and a friend of my daughter Emma another Christian. While we were visiting UK last year, Emma took us to visit Wroxall Abbey, once country home of Christopher Wren in Warwickshire. An intriguing and inspiring story was told to us by our daughter about a 'Rainbow Cross' as photographed by Mandy. Flares are relatively common in photography when aiming into the sun, but when you see the position it occurs in, this is rather more fortuitous than the usual lens flare. And as Mandy's unique story unfolds, can you but not believe that God's work was behind this?

The Rainbow Cross- by Mandy Cooper.

OK, so this story goes back nearly a thousand years.

Hugh De Hatton, whilst fighting in the Crusades (circa 1100 ad) was captured and imprisoned for 7 years. In a dream, he was visited by St Leonard and, upon awakening, found that his shackles and chains had fallen from him. He returned home to Wroxall in Warwickshire, to his wife. His appearance had changed so dramatically that his wife didn’t recognise him… only by matching two halves of a ring, that they had broken prior to his departure, were they reunited.


Hugh vowed to give an area of land over to the building of an abbey, dedicated to St Leonard. The position of the Abbey was determined by a vision. The stained glass window, now in the main house at Wroxall, depicts the entire story.

In the sixth panel, Hugh is depicted looking down at a small cross of stones that appeared on the ground, marking the site upon which the Abbey was to be built.

The Abbey was built and an order of nuns were invested in the abbey. Some time later, a young nun of the order, Dame Alice Craft, received an angelic visitation, directing that a chapel (now known as Wren’s Cathedral) was to be built next to the abbey. She was a poor nun, lowly in the order, without means or influence. But the angelic visitations persisted until Alice was able to convince the Prioress of the need to build the chapel.


Panel nine of the stained glass, depicts Alice, and the Prioress, looking down upon a small cross, this time made of snow. The cross is depicted, on the floor in front of the high altar.

In 2009, I didn’t know anything of this story. I went to Wroxall to photograph the grounds and chapel, as part of my commission to build the websites for Wren’s Cathedral and the Order of St Leonard. I went on my own. Wroxall was new to me... and I was really struck by the atmosphere outside, in the grounds, amongst the ruins. I took my time, wandering around taking pictures. At the end of the photo session, I walked along the driveway and took the picture, facing back towards the main house, with the chapel on the right. I knew that the driveway cut through what would have been the abbey, prior to its destruction. I stood a little further back, looking down to where the high altar would probably have been positioned.


I took a photograph. There was nothing out of the ordinary in the scene. I remember noticing that I’d left my handbag and camera case on the grass, over to the left… I remember thinking I’d crop it out later.

I returned home, back to my desk and downloaded the photos to have a look at them. When I opened the photo of the driveway, I just stared. At the front, over the driveway, sat a cross of pure white light, with a complete spectrum of colours visible on close inspection. I wasn’t a Christian at that point, but even so, it was so glaringly obvious I remember I just sat staring at it.

Over a year passed by. In January 2011, me and Dave (my husband!) were with Pastor Dave, in his office. We were about to leave our meeting when Pastor Dave said, ‘Have you looked at the stained glass at Wroxall?’ I said, ‘Of course I have, I’ve got photos of it’. He said, ‘No, have you REALLY looked at it.’ …and suggested that I go and look at the stained glass properly.

In February 2011, I became a Christian. Dave gave his life in May.

A few weeks ago, Dave was driving some friends to their home. He was part way through a conversation when he says he suddenly stopped talking, overwhelmed by what he can only describe as a noise of silence in his head. He was confused…and then, 10 seconds later, he realised where he was, as he drove straight past the gates to Wroxall.

God is everywhere. Not just within buildings, or books, or the minds of a chosen few. He inhabits every mortal millimetre of our earth, each molecule and microfibre of our being. He is the beginning and ending of every thought, the consequence of every action. His relationship with each one of us is individual and intimate. It is not the vicarious description of one to another, but a free form, customised, tailored fit to us all, as individual children of a Father that loves each of us in the unique manner to which every parent and every child will relate. We are His own, He knows your thoughts, the desires of your heart. He sees the tears and the joy that balance one another in a constantly flowing equity of emotion that makes us who we are and what we can be within Him. It took me a long time to work this out. I’m catching up quick!

We are being baptised at Wroxall in August…it couldn’t have been anywhere else really. 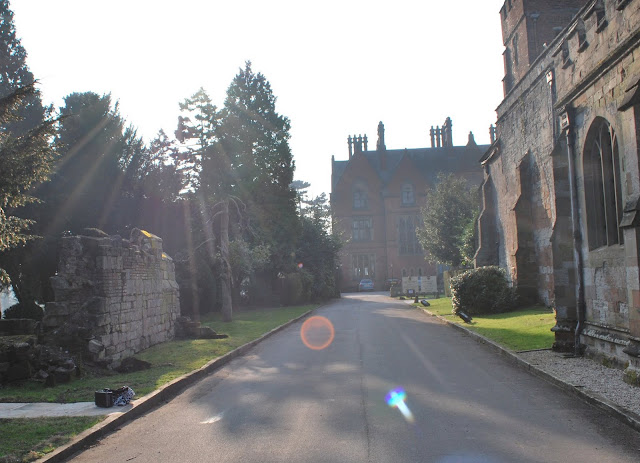 The Rainbow Cross of Wroxall Abbey.

Professional photographers who have seen this photo have commented below
(Ed's Note- the emphasis in bold are mine.)

" Amazing photo - what's the chance of capturing this!  Yes, probably a lens flare which I would call an awesome coincidence. "

And -
"Although it's beautifully shaped and a nice coincidence, crossed lens flares are pretty common depending on the angle you shoot.


I double checked with some of my photos and all are roughly crossed, although not as beautiful as this one I admit.
I'd say it's a very fortunate and beautiful coincidence. Or maybe something better :) "

So perhaps a lens flare of remarkable clarity and beauty amazingly appearing coincidentally where the original high altar is thought to have been?

What's the chances of that? Or the work of God?

What do you think?

Wow a beautiful story of God's love capturing human hearts...and what an amazing photograph! I love how the writer describes the reality of God...making up all of creation and relating to us in such personal ways. Great post!

What a beautiful post and photo! Incredible story Jim. Thanks for sharing it!

I photo is so lovely I can only think perhaps God did have his hand in it.

Cannot say anything more than: Jim, thanks for sharing. Blessings to you.

Thanks Jessica. I think Amanda has given this a very interesting and personal touch.

Great post jim ... in Pondicherry also in sacred heart church ve do have a similar paintings in glass ..

Jim, what do you think about this post and the beliefs which are described? Can you relate?

Yes sure Mike. The post is about how others see this photo, and how they relate to God.
A very special revelation by Amanda and the connection she enjoys to Wroxall Abbey.

Sheril I have heard about a church in that area with a cross that bleeds in a church. Is that what you're referring to?

Hi Jim some of the comments are correct. Many times flare will appear as a cross, I have heard it is due to the aperture being closed down maybe ti F 11- F22
Still does not hurt to see it in a more heavenly light!!!

I am lost for words! I enjoyed reading this so much. I believe God is everywhere, most of has have stopped looking. Yes it could be a lens flare but it could also be a symbol that guided her to become a Christian. Beautiful post!

Jim - I read this post the other day and didn't have time to comment. I did love the story and the history of the Abbey. However, let me be honest with you. Some years back, I would really have been excited about the 'miracle'. Now I'm happier with the every day miracles of a kindness shown or someone making a choice that takes them towards a new life. Does that make me sound cynical - if hope not.

This is beyond beautiful. I'm so glad I saw it and read it.