Beyond The Sum Of All His Fears.


An ageing soldier crying softly, beside a body on the ground
Sheds a tear for his young slain friend
He never thought this would come down.
He'd thrown away all his bush gear, camo paint and forage cap
Spent his life forgetting firefights in dark shadows
Without a thought that he'd go back.

Life has dreams from hard foundations, memories with no shed tears
Struck with the heart ache of our creations
In the invulnerability of our young years
From the vat of our maturation brews a spirit of adventure
That spills towards our next generation
Whom we protect beyond our fears.

The young soldier survived the bush war, threw his life into his dreams
Played a part in the creation
Of an Eden ... or so it seems.
Raised a calf from its lost mum, fed it every day by hand
Grew to love his lost young orphan
Sanctuary for all became the plan.

It is such a sweet temptation for us to simply turn away
To ignore the wildlife decimation
That supplies the Asian trade.
The ineptitude of our nations, the impotence of governments
Sends a message to all caring people
To care a damn is a piece of shit.

Aching heart beside his slain friend, new resolve and a pledge is made
To seek the killers of his now lost brother
The one he'd raised in his sanctuary
But old soldiers know the danger, the blood and all the fears
Never rush to don the camo
Never want to wear the gear.

Now there's a deeper call of duty, calling way beyond his fears.
He heads along the faint new pathway
Tracking two legged predators
Seeks his quarry in long shadows, where deadly ambushes are laid
Amongst flashing memories of firefights
A last patrol for his young compadre.

Life has dreams from hard foundations, memories of old despairs
Struck with the heart ache of our creations
Amidst the anger and the tears
A deadly shot strikes its target: he never wanted to kill again
But he'll protect his new generation
Beyond the sum of all his fears.

South African musician, David Easthouse, has adapted the above to his latest music masterpiece. Check it out here-
David Easthouse- Beyond the sum of all his fears.


The Rhino poaching war escalates. 668 rhino were slaughtered in 2012 in South Africa. This year is off to an equally depressing start: 393 as at end of April! At this rate, 2015 may see over 1500 killed, and that figure is just for South Africa.
This is extermination of a species. 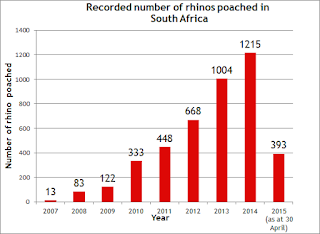 Many reserve owners, who in their youth may have been involved in the wars for independence in Southern Africa, are now - in what should be today's peace - having to take up arms and fight a new battle, this time with the survival of rhino at stake.

Dreams to create wildlife sanctuaries on their land are being crushed. Lives are being lost. Rhino being driven to extinction to supply Asian demand for rhino horn.

Beyond The Sum Of All His Fears.