A single flower blooming
in the desert, solitary,
in stark naked splendour
it called out to me.

Had I never seen it
how disappointed I would be,
this small blaze of colour
and delicate symmetry.

Other travellers simply ignored it
or perhaps just couldn't see.
Will they always hurry
and miss each flowering desert beauty?

This small flower blooming
on a canyon's rocky rim,
a remarkable part of Nature's plan
not merely random whim.

Should a single flower bloom
in the desert, solitary:
were we to not observe it,
would it still be a rare beauty? 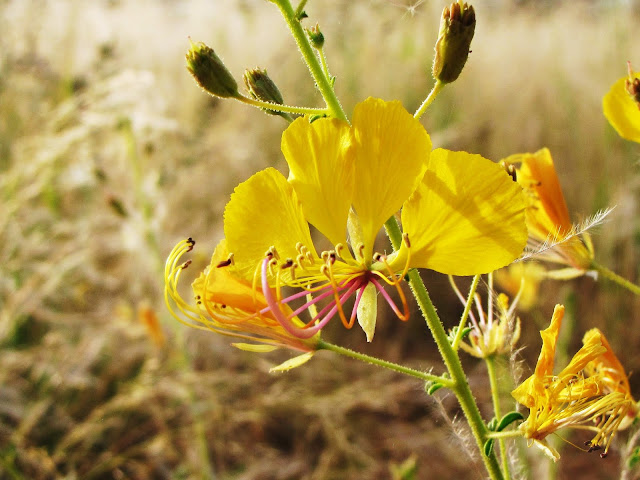 Whenever I think back about my three visits to Namibia I see desert flowers again.

We all love colourful sunset or sunrise pictures! And I love nothing better than seeing what my camera can capture! The following are more for colour and composition than scenic, but that's the way I like it.

A Smashing Day In Botswana!

On safari in Africa, sometimes the day starts off so well- then just crashes around you, and yeah, it could all be going wrong but it turns out to be a day that is so crazy- so weird- that it becomes that great day in your life, remembered forever!!


When Russell caught me in a damn weak moment
saying "Come on over Botswana way.
We're gonna convoy through the Kalahari desert.
And I'll be guiding all the way, little Jimmy,
You wanna ride along, you'll pay."


Kissed my little darling goodbye in a moment
and headed over Damaraland way,
where I built a wall in the desert so those ellies
can't bust those wells away- little darlings.
Stops the locals shooting them that way.


Caught my passage as the shotgun rider
on a Hi-Lux from Johannesburg in May.
Up front I'm gunning with a great view
Hoping for a time to tell my little darling
If I ever do make it through!


Fred and Liz were Tail-end Charlie in our convoy. Fred contributes a few verses-

"The guy driving this one- he knew his stuff
and with diff lock engaged he knew not to fluff
despite Russell in jeans all rolled up nice
the hero himself was through in a trice.

We were in soft sand and in quite a pickle
but where was Jim and the lead vehickle?
Long miles ahead as we eventually found
no eyes in their a*se and never looked round!


So poor Tail-end Charlie was stuck in the bush
until you eventually returned to give us a push.
Of course you all laughed and considered it funny
but by then Elizabeth badly needed the dunny!


We found her a place all cool and shady
But this was no way to treat a nice lady
In the following camp as the day was dawning
We felt that travelling with Jim should have carried a Health Warning!"
By Fred!


Pitching along on those deep sandy trail ways,
ruts so deep we're polishing the pan.
Narrow bush track and dust up all around us
Just when a driver needs pay attention -little bastard!
Russell slams on to avoid the prang.

An ex-army truck, heavy loaded with a trailer,
its driver busy talking to his friend
skids along and whacks us hard in a head-on!
You should have seen our front distend- oh yeah!
Crashed us back towards the bend.

Russell says "I got to drive and  report this
to the police station way back there in Maun.
Extra 300k's and it's gonnna be hard driving,
You guys carry on to Savuti- here's hoping
Maybe I'll meet you there by dawn!"

"Russell," I say "I'm gonna be there for you
That's a whole heap of driving all that way,
I can takeover when you want to get some sleep.
Got to help you out-as a friend.
This shotgun rider's gonna earn his keep."

Hit Savuti camp and they knew we were late coming.
Walking in the darkness trying to see our way ahead.
"Russell, these prints are so fresh through the bushes,
Could be ellies up ahead- sneaky buggars.
Come across them and we're dead!"

Wandered round 'til we found our friends' bush camp
Looking for a welcome from our friends.
"What you guys doing walking around in the dark for?
There's 4 lions prowling the camp!- Silly bastards!"
Just right then I could really have done with that shotgun!

4 lions were prowling the darkness in the bush camp when we were walking around in the pitch black with just head-torches trying to find our 2 other 4wd's and safari mates. Luckily, the lions had made a zebra kill just 100 metres from our camp- that kept them busy and their bellies full! We must have walked very close by them in the dark.
Elephants were in the bushes- in fact our companions were seated under a large shade tree enjoying gin and tonic, late afternoon waiting for us to turn up when a huge bull elephant walked up and started tusking bark off the tree they were sitting under!

A Smashing Day In Botswana!

There is nothing so - 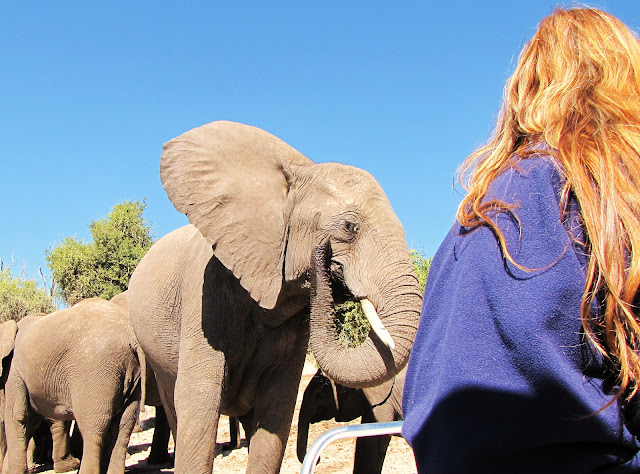 There is nothing so heartbreaking
Than to know in my lifetime
Elephant, lion and rhino
May be gone in a decade's time.
There are those who trophy hunt them
Lion bones end up in wine
Elephant are killed so ivory
Is carved into Asian figurine.

There is no greater sadness
Than to see an elephant die.
Or to stand beside a rhino carcass
And ever wonder why
As our disappearing wilderness
And our mega-fauna pass on by
Aeons they have prospered-
Gone... in a twinkle of an eye.

I have travelled across this vast world
And down through the tracts of time
But the pleasures that really draw me
Are our creatures... so sublime.
They are treasures of this planet
They are gifts of pearls and wine.
They're our sisters, they're our brothers
They are our family... yours and mine.

There is nothing e're so helpless
Than to realise this heinous crime
Of the poaching onslaught raging
Brings them to their end of time.
Current legislation is failing
Poaching soars beyond control
Asian demand is brutally rising;
We need to re-define our role.

Solutions will elude us
If between us we all fight.
Try to debate the issues
And there is no place where you might.
All the parties have their reasons
Neither one is wrong or right.
Meantime the decimation of the species
Rages unabated... out of sight.

There is nothing so disappointing
Than to see rhino supporters fall
Like cannibals upon their own members
When pro-traders make their call.
Conservation of a species
Requires contributions from us all.
Pragmatism not zealotry
Will save the species from downfall. 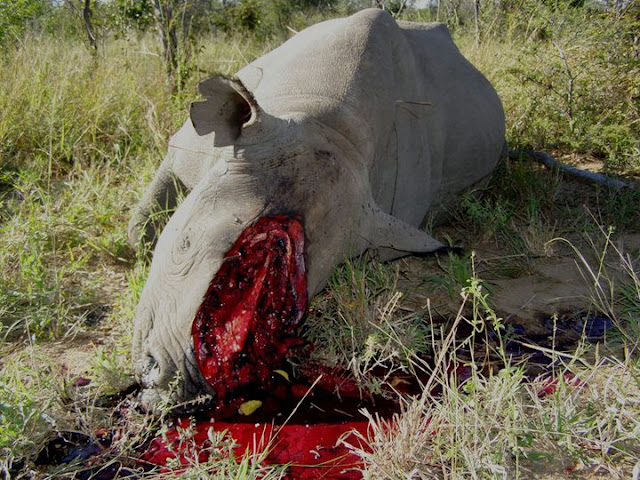 There is nothing so - 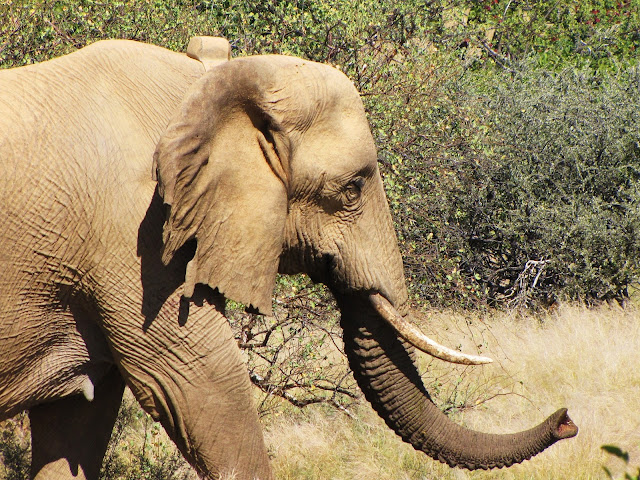 Have you seen elephants intently
One foot raised up from the ground?
Do you think that they are resting,
Merely hanging around?
Or is it triangulation sensing
To that low frequency sound
Of another herd approaching
Sending light vibrations through the ground? 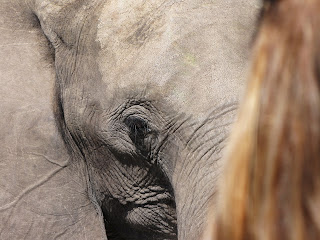 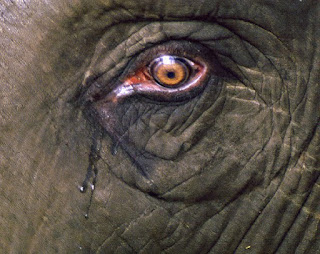 Has an elephant emotion?
Just let your mind expand.
There are senses way beyond us
That we may never understand.
Are they abilities we have forsaken,
Lost to this very modern man?
Perhaps animals still posses them
Beyond what we comprehend?

We are so arrogantly blind. 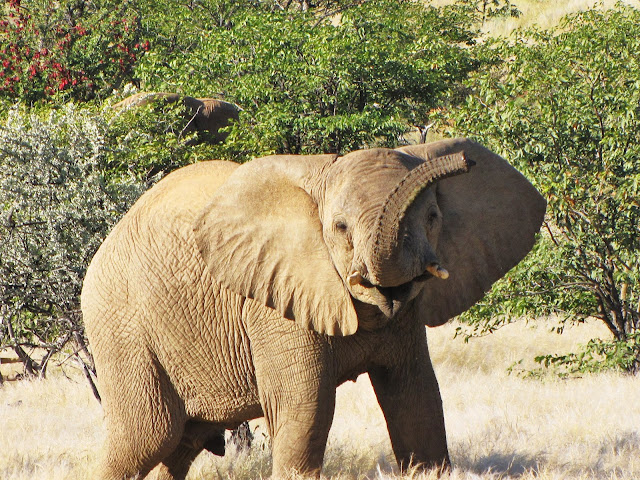 OK hope you're still with me on this one!
There are senses animals and we humans posses- well most of us- that we don't understand. Maybe we will never explain it, or, as science pushes back the boundaries we will discover new 'energies' around us, or  new ways of communicating. So don't knock it- I have had enough weird experiences to leave me wondering about the power of the mind.

Imagine yourself 300 years ago trying to explain to your village friend that one day we will see right through our human body...how could you explain X-Rays? How could you discuss thermal imaging technology? Radio waves? Yes, you'd be rushed off downtown and be tied to a stake and disappear in a bonfire! Witchcraft!

Elephants may not have the same nerve and muscular reactions to screw up their face and cry, in the same way humans do to express pain or sadness, but there is ample evidence to prove they still feel the same range of emotions of joy, pain, sadness and empathy with another.
Nature unforgettable elephant emotions

“If there ever were a time, when we can truly sense the wondrous ‘interconnectedness of all beings,’ it is when we reflect on the elephants of Thula Thula. A man’s heart’s stops, and hundreds of elephants’ hearts are grieving. This man’s oh-so-abundantly loving heart offered healing to these elephants, and now, they came to pay loving homage to their friend.”
wild-elephants mourn-death-of-elephant-whisperer/

Elephants do sense what is happening in their environment by 'listening' with their feet to sound carried through the ground- a highly developed sense they possess. Who says they do not possess other abilities?

Check this link out, and think about how other life forms may feel emotions similar to how we humans do.
Whales