Having three computers, home, work, and Kay now has her very own laptop,(because otherwise she'd never get on here to pay the bills, keep the IRD happy,or pay the GST!)it's fun to load up a new screen background from the huge range of trip photos.And they're changed around as the mood fancies, and thoughts wander to places I'm longing to get back to.Each photo has it's own story.And as they change, let's go on an adventure together.
This week it's a shot of two cheetah, taken at Naan Kuse, wildlife sanctuary, Namibia Aug 2009.Where Kay and I met up with our daughters, Emma and Elissa to volunteer for 2 weeks aiding in their wildlife conservation schemes.This is what greets me, gladdens my heart, and brings back rich memories whenever I'm at the screen,this week. 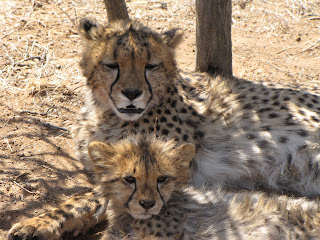 Lucky and Ayla.
Lucky was brought to Naankuse ,Namibian Wildlife Sanctuary in January 2009, but sadly had a wound that finally meant amputation of a leg.But she's adapted to her tripod status, and now lives a great life being mother to any orphaned cheetah cub brought to the sanctuary.I cannot but admire this cat for her willingness to take on the surrogate mother role to the now 3 orphan cheetah cubs,despite her own tragic loss of a limb.She's an inspiration to us all, reminding us that no matter how bad life is for us,whatever bricks have been thrown, or how low we are, there is always hope, always someone worse off that needs our help.

http://www.ecotourism-namibia.com/volunteer/volun_animal.html
If you follow that link , read about Aiko, Kiki & Aisha , the cheetahs that inspired this poem-
http://holesinmysoles.blogspot.com/search/label/Africa%20again%202009
Cheetahs have such a hard life in Southern Africa.Farming and fencing has interferred with their natural prey numbers, so a hungry cheetah may then take down a farmer's sheep or a calf.For that, a farmer  viewing them as vermin ,won't hesitate to destroy them any way he can.Thankfully, often the cubs may be taken into a sanctuary.But cheetah numbers throughout Africa are declining under these pressures.
There's a glimmer of hope though, that sanctuaries such as NaanKuse, or Africat, Cheetah Conservation fund and others are pioneering.Read about the excellent new initiatives here-
http://www.cheetah.org/?nd=guarding_dog_program
And attitudes are changing among many farmers.Our driver was chatting of how he runs a small holding.And now he runs herds of springbok, and kudu as food buffers between the leopard and cheetahs and his sheep and cattle.Whereas once those grazers would have been shot out as competitors for sparse pasture, they are now valued ,and can also be farmed for the buoyant biltong industry.
Those farmers and hunters who would once have shot out the game,today are the most ardent protectors of the same.Times change,attitudes change,farmers' prejudices and practices change or they adopt new ways.
Perhaps there may be a future for Africa's big cats.Especially if we all help. 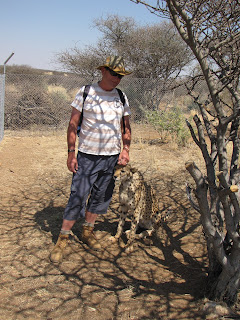 It's an amazing feeling stroking a tame cheetah,sitting beside you purring away like any old hearthside moggie.
Some say these cats are more like a dog, once tamed they remain faithfull like a dog.And not having retractable claws as a cat would.
It would be better of course, to have these cheetah roaming free.And later  on we'll talk about Naankuse's Rehabilitation and Release program for large cats,leopard,cheetah, and caracal.

Nice one Jim. As well as purrring like a moggie they can spit like a Ginger Tom. I like the idea of changing header pictures. I do the same with Windows wallpaper so that when it gets too much I just "stare at the wallpaper" and will me to go there.
Don't worry yet about Kay and her Laptop. That will come soon enough when she has to Email you to get your dinner!

Hi Lily,
you speaking from experience of communicating with Fred?LOL.
I changed the header to a shot taken in Mongolia.Just couldn't get over that sunset.
I'll have to check out the tales you're spinning on your new site too.