I've been reminded sadly by new friend Lisa,  of the loss of my Leatherman tool. http://stolenmomentscafe.blogspot.com/2010/03/something-old-something-new.html
A Leatherman tool? 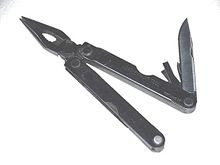 "Is this your bag, sir?"
"Yes. My bag. What's up?"
"We need to check what's inside, down the bottom."
"Oh, ok." Thinking to myself, about the spare pair of silk boxer undies with the yellow elephant design I packed, because my wife likes me travelling with quick dry undies (and  not because they have reminders of large things all over them.) Baggage through Oliver Tambo Airport, Johannesburg, South Africa has a notorious habit of being lost or delayed, so packing a change of clothes in one's carryon makes good sense. But right now the Sydney Airport scanner security guard was looking rather sternly at me.
"You could hijack a plane with that!"
"What? With yellow elephant underpants?"
Mr Security Man is not happy and flourishes a shiny bright tool at me. A Leatherman tool. My Leatherman tool I realize.
The tool I had looked so cool with in its holster, on my belt, all around South Africa and Namibia, just like all those professional guides. A Leatherman on your belt and you were someone. You knew your stuff, you looked the part, you instilled confidence that you could do anything with a Leatherman tool. Brandish one of those and you could stop a raging bull elephant in his tracks at 50 metres. And I'd wanted one for years.
Finally found one too. Outjo, Namibia of all places.
We'd travelled up from Cape Town on a GAP Adventures tour, and were heading up to Etosha, and comfort stopped in Outjo.You have to stop at Outjo just to see the cool hairdos the local Himba girls wear. 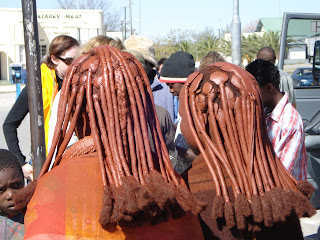 You can only but admire Himba tribespeople for their proud bearing and their pride in their culture. Many other tribes are rushing to adopt Western ways, clothing and lifestyle, but there's real beauty in the way these people carry on with their traditions under the onslaught of increasing tourism and economic pressures. 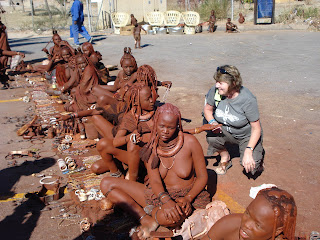 My Leatherman tool appeared. Thrust in my face with ''You buy.You Buy'' insistence from a young guy."300 rand only"
Being the canny haggler who's done his apprenticeship in the best markets of Asia, I feign disinterest but eventually offer a ridiculous price. The way these things work is that the guy is trying to sell goods for a Fagan who has many others out selling for him.There's a rock bottom price each guy buys or is supplied the goods for, and anything above that he can sell for, he can keep.So the trick is to find his rock bottom price where he walks away from you.Then the next guy you are accosted by, you know what you can get it for, leaving him a reasonable margin for him to earn his living.People need to live, and this is their only way of earning a living for himself and perhaps his family. So don't be too mean in your haggling.
So I offer 50 Rand. And walk away. Gee the guy must have been desperate as he yells after me "OK, we sell 75 Rand ." A little over $15US.
My very own Leatherman.
Or so I thought. Gee those Chinese copy anything! Ha.
And here I was, having it confiscated! Last seen disappearing into my day backpack after using it once in Namibia and then forgotten about. Travelled through 3 airports, been through 3 scanners, and now being confiscated at Sydney.
So much for African Airport scanners. Or were they blinded by yellow elephant printed underpants?

I use to work for a company in California who made all the components (handles, blades, etc.) for Leatherman and Buck Knife, mostly Buck Knife. Why I could have been the one who made parts for that Leatherman!

How ineresting that it hadn't been confiscated sooner!