Goodbye to Namibia.Or is it?

You'll have read of our time at Na'an Kuse' where my wife and I and our 2 daughters spent 2 weeks together. But when we waved the girls goodbye, it was time for a quickie 5 day self drive on our own, around one small part of Namibia, (the area where I had been on volunteer project with Elephant-Human Relations Aid in 2008.): a sort of zip around to say a reluctant goodbye to a country you can fall in love with, as it holds a lot of memories but that we may never get back to - sadly!

So picked up a prebooked Nissan X-trail 4wd from Avis at Windhoek's airport and we hit the road. First day saw us cutting across to Omaruru intending to get to Brandberg/Ugab River area. Thought I'd like to show Kay the stone wall I'd helped build, and the beautiful scenic area we were in. And if you haven't read why we slog our guts out building rock walls in Namibia, we do it to stop desert elephants breaking down the village water installations.
http://www.desertelephant.org/ 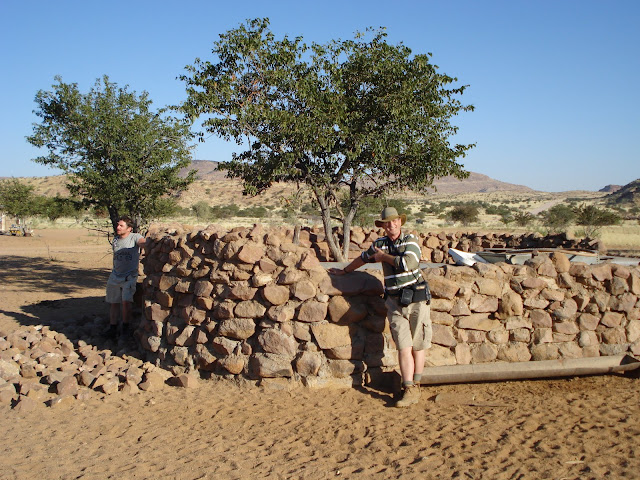 Just pulling into Omaruru, and a flat tyre! Wouldn't that rock you?! First day on sealed roads and a flattie. With a rental that won't accept repaired tyres, we were up for a replacement. To top it off, no replacements in town, meaning couriering one up from Windhoek: where we were going, you need to get a flat tyre repaired straight away. Oh well, $350...just money after all.

Omaruru Guesthouse is huge, plenty of rooms and a wonderfully friendly host. On the morning of our departure she called her staff out to the doorsteps and their choir sang us goodbye with a traditional Damara song. 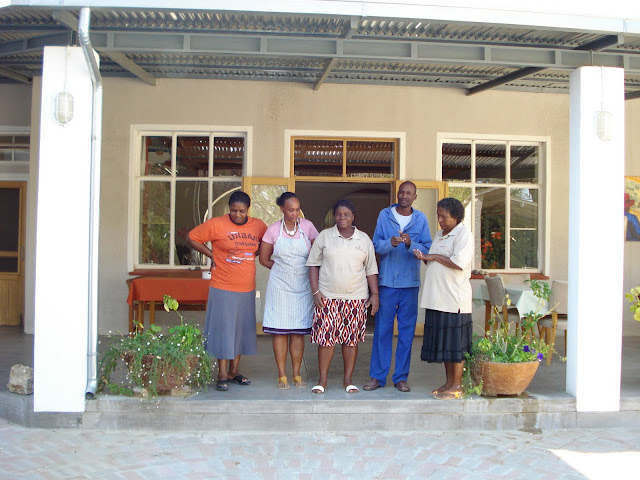 She observed that I was familiar with the tune, having heard it on a Mascato Coastal Children's Choir CD I bought on our first Namibian Visit last year, so we were able to discuss to her delight Damara music.  She presented me with a CD of Windhoek's own Cantare Audire Choir, a collection of classical European and African works.

Then we headed off to Brandberg White Lady Lodge, set in a beautiful rocky area beside the Ugab at the east base of Brandberg Mountain.

We parked in the White Lady car park next to an Elephant-Human Relations Aid vehicle.EHRA are the organisers of the rock wall building project I had worked on 12 months before. So I was able to walk up to a stunned Johannes Haasbroek, director of EHRA, and shake his hand!  Easily explained as they'd popped along from EHRA's base camp futher along the Ugab to watch the Tri-Nations Rugby at the only TV in the area!


Another coincidence was to quickly follow. As we are checking in, a housekeeper lady walks past us singing the very same song we'd been farewelled by at Omaruru Guest House!
The omens were good for us that day.


Next morning we did the White Lady game drive along the dry Ugab riverbed, seeking out the desert ellies who had passed through our lodge camp that night. Footprints showed a lone bull elle circled around our chalet in the night. Old friend Voortrekker come to say hello I would like to think.

The area is spectacular, and viewing the riverine and kopie landscapes would have been enough but finally seeing my old friends the desert ellies was just the icing. 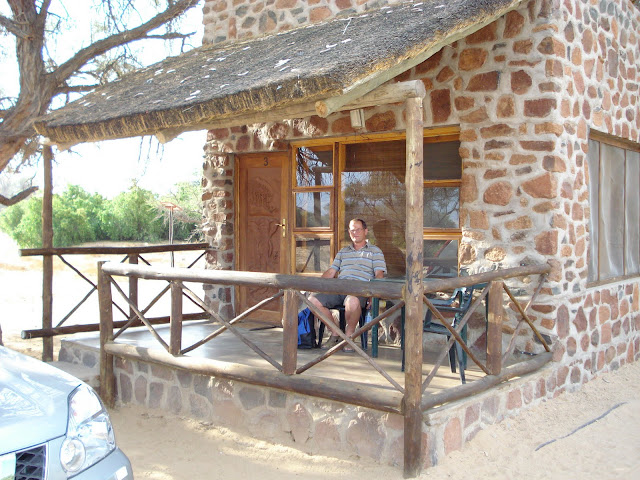 First night in our individual stone chalets at White Lady, we heard singing off in the background. We closed our eyes and drifted off to sleep with the serenade of traditional native singing. On the game drive I asked a local about that. He said an overland tour was in the tent camp area, and the staff put on a performance. I asked him if he would arrange one for the dining room that night. OK, done!
That night at dining, guests were getting up to leave after desserts, and I motioned to many to remain seated and stay. Quizzical looks I got in return. Eventually all the cooks, barmen and waiters got together and then began their performance to everyone's delight. Incidentally, once again many of the traditional songs they sang so well were on my Mascato Cds. After the performance they asked how I was so familiar with some of their songs and we were able to discuss Mascato, of which they were aware as one barman's brother had been a member recently.

On leaving Brandberg White Lady we travelled via the C35 across the Ugab and then veered off to visit EHRA's Base Camp. Now I'd spent a 2 weeks stay there in July 2008, but this time as I drove in to show Kay the camp, I finally took in just how beautiful the area was, and the secret area that the base camp is set it. On arrival there was only one local around cleaning up. I showed Kay through the camp where I’d spent some great times, and she was overawed at the setting, and said to me the camp and it's surroundings were just 'stunning'!
It was good to go back to fully appreciate the area. 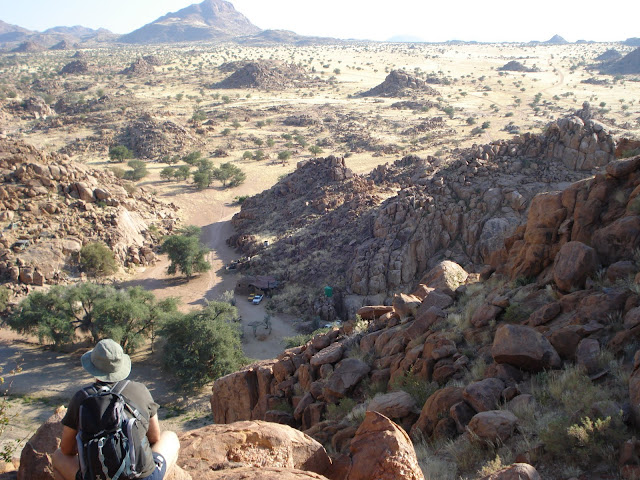 And we'd also called in to chat with the locals at the village I'd helped build a rock wall - still standing by the way. The photo album of our building team, and villagers was greatly appreciated when I presented it to them.

So off via Khorixas to Kamanjab where we visited the Himbas, and you will read about that later.
Our final morning we loaded up the 6cd changer in the x-trail with 5 CDs I had bought in Namibia and South Africa, punched 'Mix" and commenced our final drive in Namibia...and the realisation that we were finally heading home after 6 weeks hit us!

It seemed as if Africa's wildlife was out lined up along the road to wish us farewell as we drove by with the various beats of African music blaring out; giraffe stood like towering statues, warthogs dashed across the road, zebra pranced along, springbok and duiker gambolled across our path. Sadly a green snake had slithered too far out and the vehicle in front had got him.

So it's sad to finally leave such a beautiful country. But we haven't just got great  memories and photos of it, we've got the music, and that will be playing in my workshop for many months to come.

Incidentally, after saying to ourselves that it WAS going to be our last visit to that part of Africa (as Ethiopia is next...) Kay is now saying...."We've got to go back. I can't stop dreaming of being in Africa!"

Africa kind of grabs you somehow....

Goodbye to Namibia.Or is it?