Come with us as we take a nostalgic trip down tram memory lane...sorry - memory line!

Trams served our major New Zealand cities well during the early half of the 1900's but were increasingly replaced with diesel buses, or electric trolleybuses from the 60's. The last public transport electric trams rode the rails in May 1964 in Wellington. But they're resilient beasts and have been popping up again; you can't keep a good tram down! Heritage tramlines have re-opened in Auckland and Christchurch providing a valuable public service moving people around our cities again without pumping out all those diesel fumes our larger cities could do without! There's something romantic about them also isn't there?

Here on the Kapiti Coast (our doorstep) is another Heritage tramway, the Kapiti Coast Electric Tramway and museum, near Mackay's Crossing, just 2 kilometres north of Paekakariki. A dedicated voluntary group of tram enthusiasts operate the tramway, staff the little ticket office, and also renovate or re-build trams needing a little TLC. Some of the trams have been almost completely re-built.
Bravo for these guys!


A monument has been erected to the more than 20,000 United States Marines who were camped at Queen Elizabeth Park and Whareora Farm from 1942 during World War 2 to deter Japanese invasion and undergo intensive training prior to heading off on their island hopping campaign. 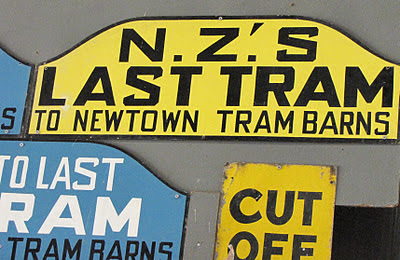 Signs, other memorabilia  and even a few more trams awaiting restoration stuff the tram museum.

Kay and I had a very interesting day out with a group of Friendship Force exchange ambassadors our FF of Kapiti is hosting. Southwards Vintage Car Museum, Steam incorporated were also part of a very full day exploring our Kapiti Coast.

I miss the trams at Blackpool in the U.K. What a joy they were! Lots of happy memories of riding the tram on the pleasure beach. Easier on the saddle than the donkeys! Thanks for sharing.

Great photos, Jim. you just cannot beat trams. love them. Even the modern metro ones that they have in a lot of UK cities these days and in Istanbul. they're genius and should never have been relegated in the first place! :)

Interesting read Jim and great photos. We used to have trams in Halifax. I think they ended them around 1970.

Did you forget to include Mr. Linky this week?

Here is a link to my Magnificent Monday post...
http://budgettravelerssandbox.com/2011/11/magnificent-monday-transportation/

We have a location in the north east of england called Beamish. Its a site where there used to be a coal mine and community. They have a tram service operating, and its a great day out. Will definetely gert there before xmas its a great day out

Trams were introduced in India by the Britishers during their rule here. We still have trams only in the city of Kolkata.

I always love post that show the environment of other countries. really enjoyed this jim!!!

Beautiful..those effort should create some tourism opportunities..just like San Francisco..

Love these city trams. Nice to see more of them coming back into service. Great story and pics, Jim.

Love your narrative and photography. I feel like I'm right there with you and Kay. Great history lesson too.

I love those trams! It would be great to experience a horse drawn tram. Great information too!

Lovely stuff. Amazing that they were horse drawn to start with.