Welcome along, join in as a few good friends have banded together to present an Action-packed Maginificent Monday Musical Tour for you all. Where are we going? Well, read on.

Barbara Weibel of Hole In The Donut Cultural Travels.               http://holeinthedonut.com/ caught my interest with an article on old time music on her site. I had watched the film "Songcatcher" that week (..again) and there was Barbara chatting about that very thing; the film is based upon the early attempts to record mountain music.

Barbara writes-
As the gateway to the Smoky Mountain National Park, Gatlinburg, Tennessee takes particular pride in preserving the history and culture of the Smokies. One of their more interesting efforts focuses on the music of the mountains, much of it originally brought over by Scottish and English immigrants. Centuries later this music was brought to light by “songcatchers,” who were astounded to discover that, due to the isolation of the mountains and the reclusiveness of its residents, the tunes and words had remained more pure than those being played in the British Isles by that time. Every night throughout the summer, the City of Gatlinburg sponsors musicians who roam the streets of downtown, performing for the tourists and explaining a bit about music and mountain lore. The program, aptly dubbed Tunes and Tales, features a wide variety of genres, including country, old time music, bluegrass, Americana, barbershop, and even cloggers who perform to “Rocky Top,” an ever-popular, if somewhat more recent addition to the musical retinue of the Smokies.

Hit this video and enjoy!

Music takes me places, and I take music from places; evens up as it's a give and take relationship. Music CDs I collect on our travels are better than photos as they are a constant reminder of those fascinating places and times we have enjoyed together travelling this big world. Load up the CD player in my workshop, hit 'Random Play' and I am travelling again... and the dog howls along also! She loves Mongolian throatsinging music...weird, the dog I mean.

Let's go to- Irkutsk, Russia.
The  Taltsy Museum of Wooden Architecture  near Irkutsk in the Russian Federation yielded a favourite musical CD.  If you read that link you'll see some of the old wooden buildings transported for preservation at the village style museum. I investigated what I thought was the delicate sound of a harp coming from one of the fenced yards and saw a woman on the verandah playing a weird instrument. Most of our 25 strong group had gone past but a few followed me in to observe and listen.

Ever noticed how some people will walk past street performers ignoring them as if they aren't there?

So I stop and show some attention, and very soon others will also and a small crowd will form: as some leave others will join in.
Seems to need someone to break the ice.


I broke the ice for Elena Vyatkina by enjoying her performance. Others joined, including a group of youngsters. Her music was really very good, with a confident strong, clear voice and she played her heart out. The instrument, which could be described as a cross between a guitar and a harp, was plucked and at times lightly strummed. I think is called a Bombora. I bought her CD which initiated a few more sales. Elena had a smile for me as I reluctantly left to find the rest of our group.
This is poor quality video, taken on my Sony Cybershot back in 2006.  Play it: you will like it.


absurdtraveler.blogspot.com takes us for a day out in Brasilia!


Brasilia, Brazil: I sit in a heat induced haze in a cafe avoiding the midday sun. Brazilia was built in a savannah and therefore, is hot and dry. I drink the tea I didn’t ask for but was given because I’m foreign, and enjoy the cafe which has internet and a slight breeze over the terrace. A couple of young boys come up to me. They are filthy and have holes in their clothes. They talk quickly in Portuguese and when they realise I’m not Brazilian make gestures to their mouths saying they are hungry and want money. I feel miserable for them but only have enough money to pay for the tea I didn’t want. They disappear. Later I see them counting a hefty wad of notes and practicing back flips off the bank below. They are street performers and should get danger money. Traffic in Brasilia is manic and incredibly dangerous but when the light turns red these boys run in front of the cars and do back flips in hope of getting money. An older man approaches them and seems to be in charge they head for the road. 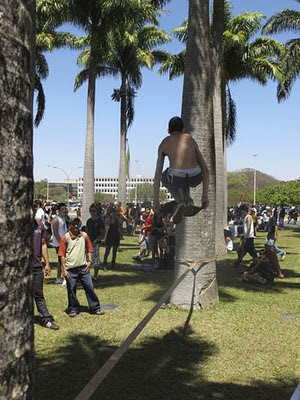 Still in Brasilia: It’s Brazil’s national day and a public holiday. It’s also being used as an opportunity to protest against corruption. Even to Brazilians Brasilia is notorious for it. It is the relatively new capital of the country and is where the government is based. We march wearing black down the Eixo Monumental and round a grove of palm trees. My friend and I head for the trees in search of some shade. There we find some tight rope walkers: 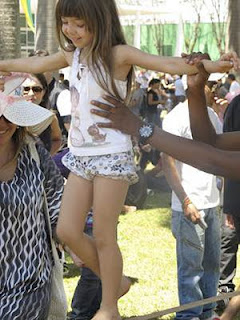 It's great to see street performers putting action onto the streets. Life wouldn't be the same without them.

Bret Love from Green Global Travels would love to show you the action packed streets of St Kitts, that wee island in the Caribbean so head over here for the next part of our tour!
A MOMENT OF ZEN IN ST. KITTS’ BUSTLING PORT
Story by Bret Love


To join in this week's Magnificent Monday-
1. Paste your name and a link to your 'Action' article in the Mr Linky tool below.
2. Leave a comment to show you care.
3. It's good etiquette to edit into your article a reference to this article to let your readers know also.
4. Visit each post, leave a comment and share Stumble, Digg, Tweet and Facebook etc so we can all benefit.

Wow...this is a magical, magnificent musical Monday for me as you took me to different places to listen to music.

The first vid is traditional music. I loved the fiddle ;). The second vid with the Bombora is delightful to the ears. I would like to try that out sometime. The music it creates is compact, much like the keyboards. I love it.

The street performers in my country are mostly the blind and they are very talented in playing the electric guitar.

Would love to see and hear your street performers Melissa. I have CDs of the amputee musicians who perform in Cambodia that I love to listen to. Great to see people who have challenges able to use their talents to earn a living, so I always buy their music CDs to help support them.

Hi Jim: Thanks so much for including my tidbit about street music in Gatlinburg. Really enjoyed reading about the other street performers around the world.

You really can find amazing performers among street musicians. Convent Garden in London have some really good ones. Sometimes, the odd talent can be heard in the streets of Paris too.

Fun blog Jim and I have already read some great postings!!! I have been to Gatlinburg and it is a fun place!!

Hi Barbara, wonderful to have your titbit! They really put Mountain music out there to get people interested in the style.

Thanks Michael. Yes there is some amazing talent on the streets. I stopped and chatted to some in Edinburgh and one guy was working his way around the world funding his travels from his street performances.

did you try the slack line?? pretty hard to maintain balance! :)

This is a fun blog. I just kept going from one post to another. Thanks.