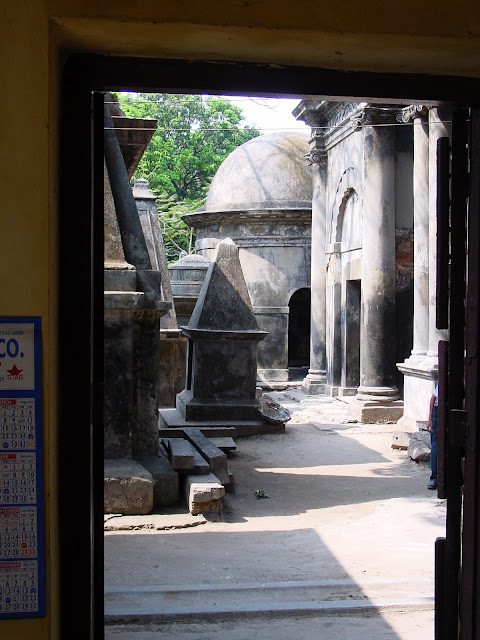 Unexpected surprises await the cemetery explorer: just who is buried there? What mark did they leave in history? What hardships did they endure? So much history to learn. Perhaps ghosts of lost loved ones still seek their beloveds: maybe they have found each other? Lots of questions and answers to be found in graveyards, especially those that date from the colonial era.

Fragments of the  British Raj  can be illustrated by the names you may find in India's old city cemeteries, which are often easy to find being located close to their central areas - the outskirts of the city in times past but today surrounded by sprawling suburbs. In April 2006, Kay and I made a beeline there on our first day in Kolkata, the massive, sprawling metropolis of more than 15 million people situated on the delta mouth of the Ganges in eastern India. This was the start of a great adventure in India visiting a child and her family we sponsor through Childfund. Read about that here - The Village Pump.

A listed Heritage site South Park Street Cemetery in Kolkata, India is a 'library' recording the names of early colonial individuals and families, giving a peek into their lives and the hardships they faced. The restored headstones state some very early deaths, often due to diseases such as malaria, typhus and cholera, so common then but misunderstood as to their causes and how best to treat. Some sad stories are told by these inscribed stones. 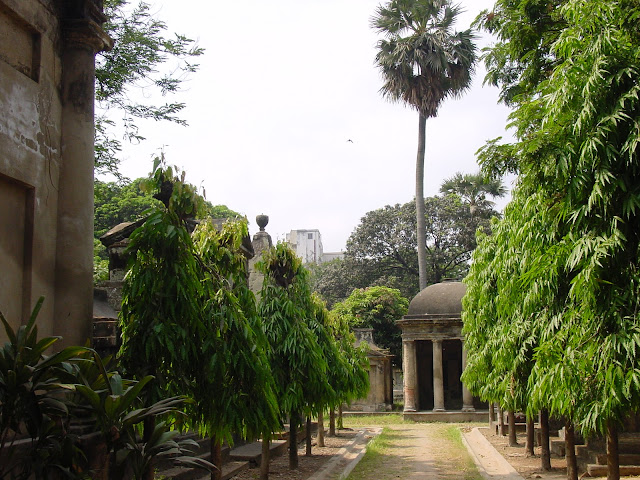 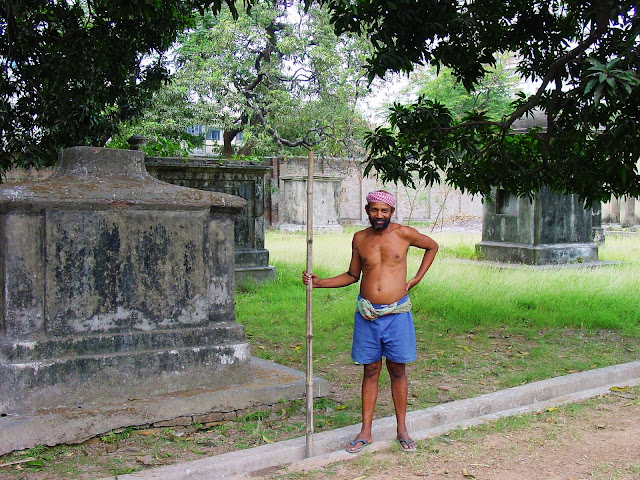 One of the caretakers. 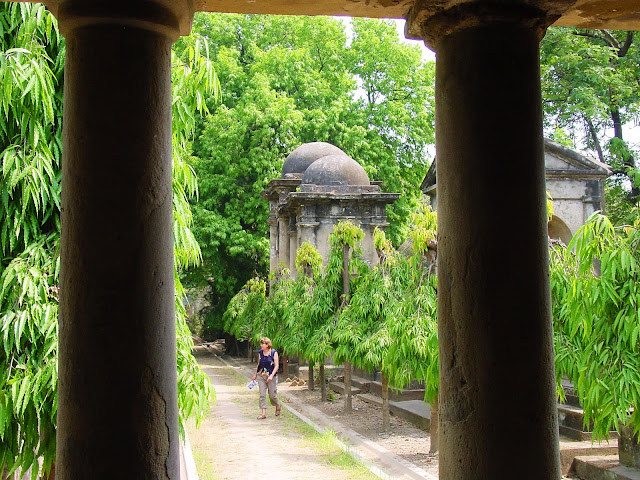 There are marvellous opportunities for photography.
Contrast of form, angles and textures everywhere. 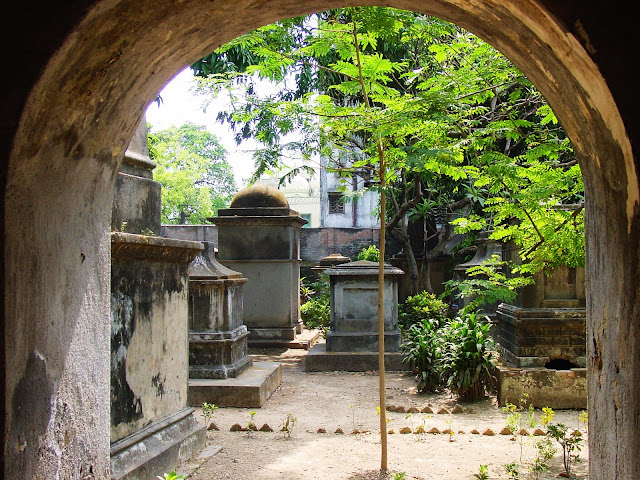 Still a place that leaves one with a sense of respect for those who have gone before us, often at a very young age.

For more info on one of the top 7 things to do in Kolkata, and how to find South Park Street Cemetery refer here -
South-Park-Street-Cemetery

Travel Photo Thursday is on again where travel bloggers post up their great pics from around the world. Join us. Post up yours and head over to Nancie's Budget Traveler's Sandbox and link into the fun!

I have seen these places..you revived some real old memories..thank u Jim.

I like visiting cemeteries too for some interesting or even imaginative interpretations of what one can read on the tombstones.

Thanks Alpana, I remembered these photos after reading your blog so thought they would make an ideal subject for Travel photo Thursday.

Thanks Janu and Muza-chan. I think the contrasts between foliage and hard granite shapes does look nice.

Many places we visit we often include the old cemeteries Michael. Drops you right into a sense of place, and the history of the city.

Jim; I apologize, I will read this tomorrow, tonight the words are swimming and I am off to bed. I wanted to let you know there is something for you on my blog; http://jovanecatharticmusings.blogspot.com/2011/11/awards-i-have-more.html , check it out. <3<3<3

Neat framing in some of these shots reminds me I should use that technique more often. Thanks for sharing, always!

Sleep well Jan. I'll pop over and try not to disturb you !

Thanks Mike. I love using framing technique even if it's just foliage or a tree branch or in this case getting right inside the mausoleums and shooting out. Gives the viewer a sense of position somehow.

I have a strange fascination with cemeteries as well, particularly old ones. Your last picture really draws me in... looks as if I'm about to enter through the gate into somewhere very special.

I have always liked visiting cemeteries. The sense of calm and peace there is quite a balm to the city-dweller. Jim, you should also visit Chennai and its cemeteries. Reading the headstones, looking at the birth and death dates and just wondering about the lives of people who are buried are some of the things that I enjoy doing.

Thanks for this treat, Jim.

P. S: Long ago I did a post on cemeteries.
http://meanderingsandreflections.blogspot.com/2010/01/at-home-with-those-asleep.html

Jim, your photos actually took me on a trip there. Although cemeteries are usually a place of quiet, I find them intriguing and mystical. There are no two alike and I have always gotten a sense of peace and calm when visiting. Thanks for sharing :)

Love the contrasts, as well as your framing.
Old cemeteries have so many stories to tell.
http://insidejourneys.com/?p=7452

Nice pictures Jim. So close to home. Was there in Kolkata this June

Great pics! And super interesting! I think it's so fascinating how cemeteries are so different depending in the culture.

Interesting, it almost looks like the famous La Recoletta cemetery that we have here in Buenos Aires.

Hi Sophie, not a gate but a doorway. I was inside the family mausoleum taking the pic looking out. Eerie.

True Susan they are a very restful place situated so close to the busy noisy city life but the high walls cut the noise down dramatically. A place to escape to.

So true Mary. I'd like to think it is a quiet mystical place also where spirits may rest forever. We spent 2 hours there just reading all the headstones.

Such beautiful photography, Jim. I love the way you framed the shots with windows, arches, etc.

Thanks Insidejourneys. With those huge old style memorials and family mausoleums it gave great opportunities to get that framing effect.

Hi Rimly, I thought you may appreciate this. I haven't posted enough on India and being such a fascinating country of contrasts I really should!

Thanks Sabrina. We think the same way. They are often where we start to get a sense of the place and history.

You'll have to post up pics so we can see Nelieta.

What a great cemetery! I too visit cemeteries when traveling. They are usually very interesting and you can learn about the history and people. This one also looks peaceful.

Very interesting. I think these old cemeteries are so interesting in the stories they tell. I've been visiting them since I traveled with my parents long ago --- always so sad to see the graves of the very young who have died.

wow- the stark gravestones compared to the lush greenery is beautiful. great shots!

This is so interesting and beautiful Jim. I am so excited to follow your travels. the photos are stunning. I am glad that we have as humans furthered our education of these illnesses.<3

Ha ha, my husband is always teasing me about my fascination with cemeteries. I love your image of an old cemetery being like a library. I've been to a few other Raj-era cemeteries in India and there sure were a lot of ways those young people could die... Love the framed photos also. Really must get to Kolkota!

love your first photo. interesting play of light and shadows :)

this may sound morbid but i really love cemeteries...i'm always fascinated by the headstones and who those people may have been...

I'm glad I'm not alone in my somewhat morbid fascination with graveyards and cemeteries. I could explore them for hours.