A MOMENT OF ZEN IN ST. KITTS’ BUSTLING PORT

Port Zante is hardly the sort of place you’d expect to find a nature-loving guy like me. Located in the bustling heart of St. Kitts’ capitol city, Basseterre, the port is the entryway for thousands of tourists virtually every day, disembarking from their massive cruise ships in order to spend a few hours dipping their toes as delicately as possible into the waters of Caribbean culture.

Let’s face it, the place is a total tourist trap– a third-world shopping mall designed to draw first-world dollars. Europeanized shops selling duty-free crap nobody needs sparkle with the shine of homogeneity. Streetwise entrepreneurs peddle an opportunity to take photos with the Vervet monkeys that have become a nuisance in the nation’s vast rainforest, practically thrusting the diaper-clad primates into your arms before you can say no, then demanding $10US for their troubles. And everywhere there are tacky souvenirs, most more than likely made in China.

Like all tourist havens, there are treasures to be found here. The National Museum offers an engaging overview of the tiny island’s history, with exhibits tracing its heritage back to the early Arawak and Carib inhabitants, through the years of colonialism and slavery, and up to its independence from England in 1983. But despite its low-key charms, I could’ve counted the total number of tourists we saw during our hour at the museum on one hand, and most of those were only there to visit the gift shop. 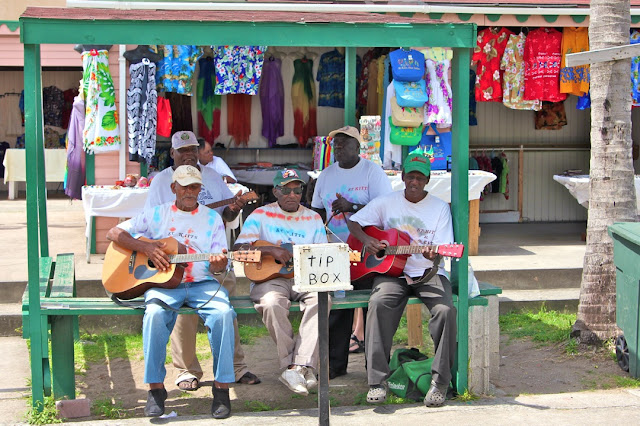 Fortunately we found our moment of Zen on a quiet side street, near the St. Kitts Board of Tourism office. There, away from all the hustle and bustle amongst a small stretch of vendors hawking their wares in an open-air market, we found a 5-man band playing acoustic music that reeked of island-borne authenticity.

The quintet was dressed almost identically– slacks or jeans, faded tie-dye T-shirts with “St. Kitts” printed on them in simple fonts, old baseball caps with the brims pulled down to shield their eyes from the glaring midday sun. They were clearly working, with their Tip Box placed a few feet in front of them as they strummed their guitars, clanged their triangle and sang simple harmonies for the occasional passers-by. But it wasn’t difficult to imagine them hanging out on the beach just down the road, drinking a few beers and singing the songs that had been passed down for generations.

These simple but potent island folk songs are known by many different names, but the most well known is mento, the traditional Caribbean music that predated ska and reggae. A fusion of African and European musical influences, mento’s roots can be traced back to the 19th century. It’s sometimes confused with the similar-sounding calypso, but lacks the Spanish elements of that Trinidadian sound (it didn’t help matters that Harry Belafonte’s classic hits “Day-O (The Banana Boat Song)” and “Jamaica Farewell” were really mento songs sold as calypso).

Like the blues and country music in America, mento in the Caribbean (especially Jamaica, where it originated) was the rural music of the common man, used to accompany everything from daily work to special celebrations. The lyrics commented on daily life, ranging from poverty and other social issues to downright lascivious sexual innuendo. In the 1950s, artists such as Lord Flea, Lord Fly and Louise Bennett popularized the form, with Belafonte making it famous. Though it was eventually eclipsed by reggae and dancehall music, Jamaican mento bands such as the Jolly Boys remain popular today. 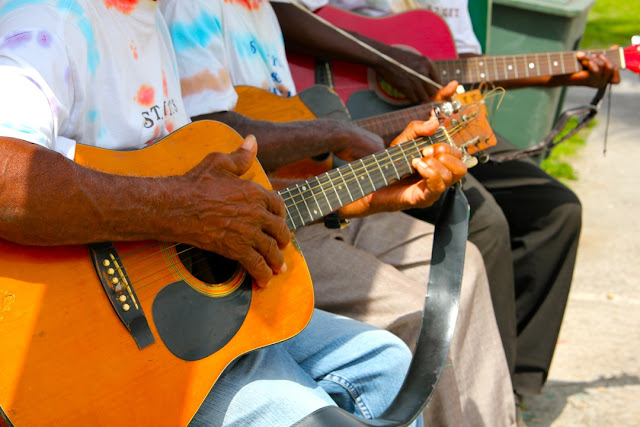 Listening to this anonymous band on a quiet side street in one of St. Kitts’ most popular tourist spots, I found myself transported for quite some time. The cruise ship passengers, aggressive hucksters and tacky souvenirs faded from my mind, replaced the sounds of the soul of the Caribbean. Like the National Museum, these five musicians were a taste of the island’s history, and their music a treasure that deserves to be preserved for future generations.

Bret Love is the co-founder of Green Global Travel, a web-based magazine devoted to ecotourism, wildlife conservation and the preservation of global culture. He’s also a veteran freelance writer with 18 years of experience whose work has appeared in more than 50 publications spanning the globe. Visit GreenGlobalTravel.com for more info. You can also find Green Global Travel on Facebook, Twitter &; YouTube.

A MOMENT OF ZEN IN ST. KITTS’ BUSTLING PORT

I love street performers and have photographed them in various places. I think I would really enjoy photographing them in Saint Kitt !!!!! Looks like a fun place and I know it is beautiful!!!