Lilly is one of a pack of 14 African Painted Dog  pups taken in early last year by Naankuse. You can read about this in an earlier post - Who let dogs out.
The African Painted Dog, Lycaon pictus, also referred to as African Wild Dog or Cape Hunting Dog, once numbered over 500,000 across 39 countries, but now there are only about 3,000-5,500 in perhaps 14 countries. As wilderness areas lessen due to human encroachment, wildlife is pushed into smaller and unconnected areas, numbers fall too low, scattered pockets of survivors cannot mate with new 'blood' and the gene pool is diluted in strength. The pack may be cut off from infusions of new, stronger genes. This lack of new gene infusion is now identified as a prime cause of falling numbers of many species, such as lions. Nature's way survival of the fittest by inheriting new stronger genes has been interfered with by human encroachment.
Lilly pictured above, is named after our own mongrel. She is one of 14 Wild Dog pups taken in last year by Naankuse, a wildlife sanctuary and re-rehabilitation centre just east of Namibia's capital Windhoek. The critical level of Wild Dogs in Namibia, now around 350, compelled the removal of 14 young pups from the den on a farmer's property where they could have faced persecution. Usually the mother would soon bring forth another litter. These 14 pups plus the 2 male brothers already at Naankuse are to form the basis of a breeding centre for release. Some of these Wild Dogs will be swapped with other centres to increase gene pool diversity. That would be particularly good if survivors in areas where diseases have occurred are brought in to breed disease resistance traits through to new generations.

Wild Dog breeding and re-introduction programs are fraught with difficulties in maintaining healthy captive populations. Generally inoculation against disease such as canine distemper is required. Released progeny may be inoculated but their wild born pubs will have to take their chances. Wild Dogs range over vast territory, often taking them into close contact with villages or farms where livestock predation returns them the farmer's ire, usually with them being wiped out as just another pest.
Research and a planned program for release is essential. Ensuring there are large enough wilderness areas with a sustainable prey base well away from humans is also a problem.
Naankuse is developing a national management strategy for reintroducing captive wild dogs back into their natural habitat.  There will be an international workshop bringing together experts from all over the world in wild dog management and introduction to formulate a working plan. They plan to hold this in September but need to raise funds for it to happen. Even a $10 donation will help.

Lilly is our adopted Wild Dog. We have just renewed our subscription.
Easy to pay by PayPal here- Naankuse PayPal

Since writing this article I have been advised by Naankuse that Namibian Laws do not allow captive breeding. Plans have been reformulated. This message from Naankuse-  "Naankuse is not a breeding centre ...for wild dogs, breeding in captivity in Namibia is illegal but what we will be is a holding facility to allow supervised pack formation of captive-reared and wild-caught dogs, which can then be released back into the wild. Keep up the good work!"

BTW-
Here's an interesting example of gene differentiation within a species.
Take a look at this photo I took in 2009 when our family volunteered at Naankuse . The pair of brothers that have been in the sanctuary for a few years, and will be included in the program. 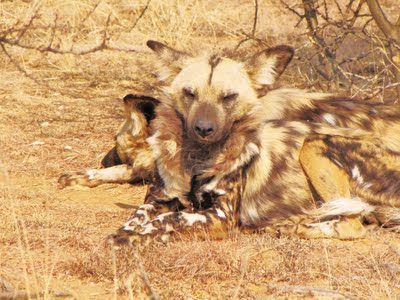 And this is Lilly, our mongrel. Kay asked me to add this pic so both our Lillys are showing.
.

Indeed Lilly is one of the prettiest dogs I have ever seen. I love her ears.

Wow, didn't even know there were painted dogs! They're not just "painted", they also have Mickey Mouse ears. Lovely creatures. Glad to know there are conservation efforts for the species.

Always learning something from you Jim! You will have heard of the expression that the dog often looks like its "master"- what would Lily's "master" look like!! That could be a competition!!

She is certainly a beautiful animal! Tremendous post! I saw your link on BPOTW and will now be following you - I look forward to reading your older posts as well as your future posts.
-Kevin

Yeah, you can see where Disney got his inspiration.
Hi John, thanks for that link to the elephant discussion.
Laura, they are so cute aren't they?
Look at the long legs!
Thanks Krouth, you'll be seeing me more often over at Bushwarriors too!

Thanks AJ and Jessica. All is good when a blog artickle serves to educate or bring knowledge to others about endangered species.

Both the Lilys are beautiful.

Lily is most certainly a beautiful dog! Thanks for sharing such interesting information Jim. I hope the conservation efforts work well, so there will be more Lilys in the future.

Haha - I was about to say, wait a minute, that doesn't look like Lilly! Have never seen this type of animal before - great post!

That's a good looking dog. I'm surprised that they are called as such...it's gentler that way than calling it wild. Although, a 'cheetah' hit my mind all of a sudden...

What took my attention was 'canine distemper'...what is that?

I hope many will support this program. Again, sorry I can't offer help financially but then I support your cause :)

What a beautiful animal. It makes me happy when I see people working hard to help animals. Just stopping by to say hello from Best Posts of the Week. -Lola from Lolarati and Buddhatropolis