S IS FOR STEVENSON: ROBERT LOUIS STEVENSON! THE A- Z CHALLENGE. 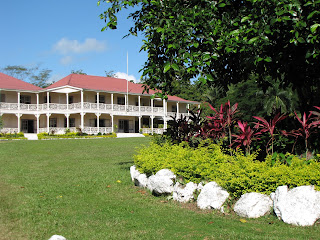 In 1890, the highly aclaimed Scots writer settled on the island of Upolu, Samoa, building a 2 story house upon his estate at Vailima. The house still stands, having been extended and later used as the German Governor's house during their colonial period, later falling into disrepair. Now renovated, the building is a museum dedicated to Robert Louis Stevenson.
Robert L Stevenson involved himself in Samoan life and culture, and had an active interest in the politics of the time, siding with the Samoans struggling for their independance against the colonial powers of America, Germany and Britain who jockeyed for control of Samoa. The Samoan people hold him in high respect to this day. He earned the name 'Tusitala- teller of tales.' 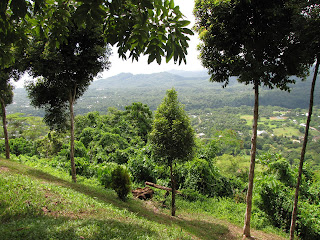 Upon his death, a path to the top of Mount Vaea behind and overlooking Vailima was cleared by villagers who came from all over Samoa. Tusitala's coffin was then passed by the Samoans lining the track, to the top where he was buried. 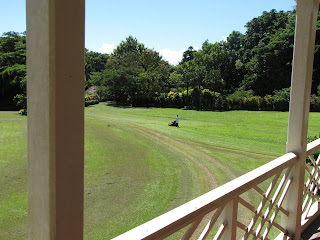 In May 2010, Kay and I holidayed in Samoa and top of our things to do was visit Vailima, and to view the museum and his grave. We arrived in time for the morning guided house tour, where rooms are set up as they would have been in his time.  Shelves are packed with copies of his works. As he is amongst the top 30 most translated of authors, there are many books in various languages, some of great age. As with the rest of beautiful Samoa, the grounds are immaculately cared for, planted in lush colorful tropical vegetation. The walk from the museum to the top of Mt Vaea is through dense forest, quite steep in many places, but once at the top the view is well worth the effort. 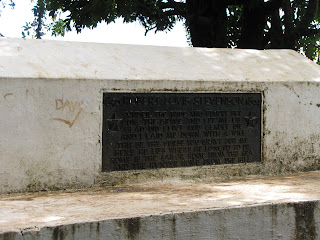 Under the wide and starry sky,
Dig the grave and let me lie.
Glad did I live and gladly die,
And I laid me down with a will.
This be the verse you grave for me:
Here he lies where he longed to be;
Home is the sailor, home from sea,
And the hunter home from the hill.

S IS FOR STEVENSON: ROBERT LOUIS STEVENSON! THE A- Z CHALLENGE.

Jim,
You did Good thank you for writing out what was on the plaque

Thank you for sharing this with us..will make my daughter read this.

Hey Jim, It is always great to learn something about a great writer...looks like great place to visit. From what I have read the samoans are amazing people..

Samoa is one of the most beautiful of all the Pacific Islands. The people keep the environment trash free, unlike many other places. They take a pride in the gardens and grounds, well maintained,colorful plants, villages compete for the best presented.
Loved going there.

Thanks for sharing this with us Jim.:)