PRAY FOR AN ORPHAN BABY ELEPHANT.

Dr Clay Wilson, a veterinarian based in Kasane, Botswana has supplied this story. The tragic episode of human-wildlife conflict. If after reading this you feel you would like to help by a small donation, please do so here- http://chobewildliferescue.org/
Read about Dr Clay's work then go to the donations page. Thank you!

In 6 weeks time I will be in Kasane and will meet Dr Clay personally.

PRAY FOR AN ORPHAN BABY ELEPHANT

I was called by parks to attend to a most bizarre situation. Apparently a young child was charged by a cow elephant within the boundaries of the town of Kasane. Problem Animal Control wardens responded and on arrival the cow allegedly attacked them and they had to shoot her out of self defense. They had not noticed she had a baby calf. When I arrived on scene in the afternoon the Cow elephant had already been butchered by the community and all that was left were a few bones. The children had just came out of school and were crowded around the carcass and running around screaming and shouting in excitement. I finally managed to spot the baby elephant and estimate his size before I prepared a tranquilizing dart. 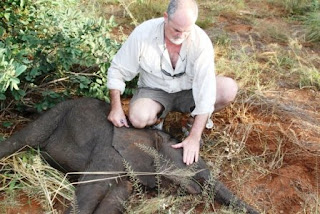 In the interim, children and adults were chasing the poor terrified baby around. It was extremely traumatized and panicked with all these people around it. It took me over an hour on foot to finally get close enough to dart it. I was so dehydrated I profusely vomited as I usually do under such stress. I got it over with, and went to attend the baby.
All the literature and experienced veterinarians I talked to have stated that anesthetics in baby elephants are very tricky and that they have a very high mortality rate. There is no data on dosages on record that I can find. I guesstimated half the dose than an adult elephant. I’m now flying by the seat of my pants on this. 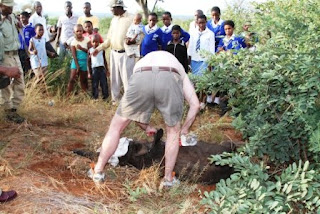 The baby went down within 4 minutes. I decided to give it one third of the reversal drug as I was extremely worried it would die. Well it almost immediately woke up and I was forced to jump on it and hold it down with my body weight as a warden had to retrieve my vehicle over a mile away with all my supplies. I had to take my shirt off to cover its eyes and tried to calm it down by talking to it. I gave it 3 more injections for a total of 10 mg of Etorphine before he calmed down enough so we could load him on to the vehicle. Please excuse my fat belly. I am no longer a young man. I am amazed it took the same dosage as an adult elephant but this is how we learn. I was extremely stressed out with worry about the dosage.

It was a wild ride into the park about 15 km away from the capture sight. The baby was struggling so I held its trunk and spoke to it gently as the land cruiser sped down the road and into the park.

We stopped at the first pan that had a pool of water and is frequented by elephants daily.

I administered antidote and the baby revived rapidly. It seemed no worse for wear physically.

I cant imagine what emotional scars it will bear. It was too large for me to keep at home and rehab later, so it’s our hope that it will be able to drink water at the pond and hopefully be adopted by an elephant herd tonight 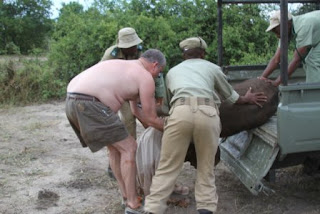 We all pray this is the case.

We need to institute an education program to teach the local population and children the importance of wildlife to their heritage: and in fact it is the life blood of the town through tourism. They need to learn that here we live with them as neighbors and appreciate them as equals in the big picture. As always Laura is by my side offering assistance and as worried as I am. I do the best I can…

Next day.
We spent all next day looking for the baby elephant that we had to release because we don’t have a facility to keep such a needy animal. Hopefully soon we will be able to afford to build an orphanage. The official policy right now is to leave animals in the bush for nature to take its course. In Chobe with 160,000 elephants, this is unfortunately a common occurrence. With patience, education and by example, we have managed to slowly change the mindset and the cooperation of relevant authorities to be able to rehabilitate injured animals for re-release into the wild. This takes a lot of funding, time and commitment.

As many of you know Chobe WIldlife Rescue ( CWR ) has been working very hard to attain these goals. Many of my Facebook friends have stepped up to bat to make this all possible.

As for the baby elephant released we have found no sign of him. We have scoured an area of over 5 kilometers all day today. There have been no vultures spotted that would indicate a death and the area where he was released has no lions at the moment that would predate him. People that rehabilitate elephants know that its chances of survival are slim in this harsh environment with no mother to suckle milk. I have to believe in my heart that a herd of elephants has adopted him. 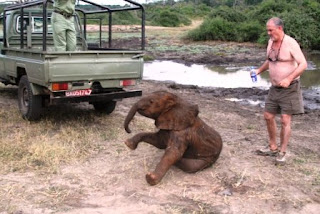 Many experts will disagree this to be possible. I have spent countless hours observing and mingling with elephants over the past 4 years. One thing that I do now is that they are loving, compassionate, intelligent family oriented creatures- not unlike what a human should be. I have seen many things in the wild that surprise me even after a lifetime of experience in close contact. This baby was strong with a will to live, was not injured (certainly emotionally traumatized), and unlike other places in Africa there are hundreds of mother elephants suckling and caring for their youngsters that were sure to come to the waterhole where it was released.

Elephants communicate and interact continuously. I’m not an expert but I would hope that a compassionate mother would have recognized its distress and taken him under her care. Often mothers will have a series of children 2 years apart that remain in the family group for life. I have often seen sub adults up to 6 years still suckle from mom and then allow its baby brother to suckle. In my experience these social creatures will show many human emotions, and it is my hope that this baby may have got lucky. I have to believe this. I don’t think many human mothers would bypass a screaming baby dumped in a trash can? 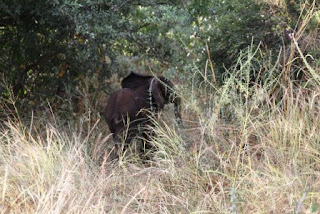 I have often been told that something is not possible and that’s not the nature of things. That is my cue to make it possible and make it happen. This is my personal experience. If he did die, it would be best in the majesty of the African bush than in the village where he was being persecuted. In our search we came across a young bull with an extremely swollen hind leg. On binocular inspection it appears to have a gunshot wound. We were unable to approach it due to the vehicle being unable to traverse the thick bush we were in fast enough to dart it. We will be searching for both elephants all weekend.

Until a proper facility can be funded and built to accommodate and care for these orphans, CWR will continue to treat and heal all wildlife in distress to the best of our ability in the field and in our back yard. Prayers said for baby elephants everywhere, may you dream with the angels

PRAY FOR AN ORPHAN BABY ELEPHANT.

I will lift up these baby elephants in my prayers, and all of you who go through great lengths to help them. You are a blessing to them and a source of inspiration as your compassion gives hope for the longevity of humanity.

I can't even imagine what would have become of that baby had you not been there. You are a blessing to many and the baby elephants are in our prayers. I do hope you find them both:)

Oh my, this is awful- thank goodness you got there and we will definitely be thinking about you and the baby elephant.

Heartbreaking story, but I admire your tenacity in your efforts to preserve these amazing creatures.

Your wonderful deeds were great source of blessings for these baby eles Jim.... Now, I am beginning to understand the kind of travel that you do that every one of us has to ponder and set as example. I do hope to do the same in the future.... Thanks for the inspiration....

Your are great !! you are one of the godfather in responsible tourism i guess !! Hats off

Awww this is heart-rendering. I also hope that baby elephant had been adopted. But it is also inspiring to know there are people who'd care about these animals.

Dr. Clay is doing an amazing job. I had goosebumps reading this. It is true education is key most often people act on fear of what they do not know. Very inspiring read.

I think, in the case of the baby, no news is good news. And with the vaunted memory of elephants, he/she will be very cautious of man. Every time I hear about something like the wounded one, it makes me want to go there and do a little strangling. Good luck

Praying for the baby elephants. This story is deeply touching and kudos to Dr. Clay for being there.

That's such a sad story of the mother being shot because they didn't know she was protecting her baby but also an amazing story of what you go through to protect and preserve the elephants.