L IS FOR LORD OF THE RINGS: THE A- Z CHALLENGE.

L is for LORD OF THE RINGS

3 films were shot here in New Zealand during the years 1999 - 2001. When the announcement was made that filming would be in New Zealand, I fired off a resume of my work to the  production company...and heard nothing back from them!

Making all sorts of footwear to order for difficult fittings and sizes was my craft. Give me a photo or a line drawing and I'll make up a copy to fit. So I thought they would need someone skilled in making up boots and shoes for the various characters, and in the quantity and range of sizes needed for all the stand-ins and doubles. An actor may have a body double, stunt double, riding double; and in this film where there is an extreme difference in size between human and Hobbit characters, they would also need a size double.

Peter Jackson used several different methods of achieving on screen size difference between Hobbits and humans. The info here Special effects Lord of the Rings  is incomplete. What it doesn't say is that they also employed midgets from overseas, and they hired a 7' 2" NZ guy as size doubles. The little guys were dressed up in matching Hobbit clothing as for the usual main actors, and the 7' 2" guy, we'll call P, was dressed in matching human or Elven clothing and back shots or faraway shots were taken of them, achieving the impression of great size difference between Hobbit and Human or Elvens.

Then they struck a problem!

To complete P's costumes as the many human and Elven characters he was to size double for, each would require shoes or boots to fit him. P being a very tall man wore size 19 English size footwear. Their wardrobe found this to be a very difficult task and they hunted New Zealand for someone to make size 19 men's. No luck.

So P casually said " Why don't you get my shoemaker to make them?"
Well, he would be getting his shoes and boots made by someone wouldn't he? 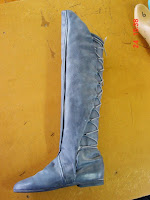 I ended up making all P's boots for his size double roles. Then since I'd cut the patterns for his, I also got the work to make for most of the human and Elven lead actors, and their stunt, body and riding doubles.
P also size doubled for Lady Galadriel played by Cate Blanchet, and Arwen by Liv Tyler. I made their footwear. The Ringwraith chase scene famous in the opening film "Fellowship of the Ring" shows Arwen wearing boots similar to these on the right- while we produced in grey, their wardrobe would change the colours and age them so in the film they will appear quite different. 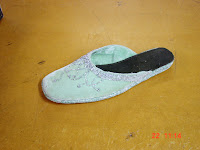 The slippers to the left were made for Arwen. Possibly her Ceremonial gown. We were never told what they were for, just given a beautifully hand beaded velvet and asked to craft this style.
Working velvet for footwear is not easy as the slightest crush or drop of adhesive would have wrecked the painstaking work of the person who had handsewn hundreds of beads on that fabric. 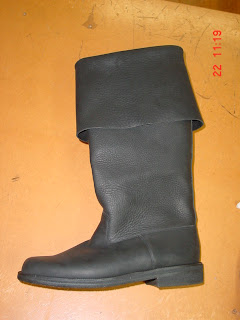 The most exciting work was making boots for Aragorn, Faramir, and Gandalf.  Check these pics out.

These were Aragorn's first boots used for much of the filming for the 3 films, but subsequently a new style was created so you won't see him wearing these.

The new style is the black suede boots below. 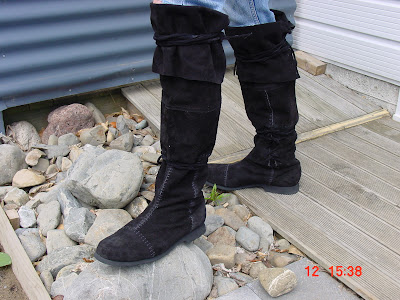 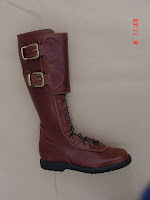 ﻿
It was a very hectic but interesting time in my career as a specialist shoemaker. At the time New Zealand's filmaking industry was booming and I was making footwear for two other films at the same time. A very creative and rewarding period.

L IS FOR LORD OF THE RINGS: THE A- Z CHALLENGE.

I'm impressed and awed. I knew about the midgets but not about the giants haha. Awesome boots too. I wish I had some good boots to wear here. My feet are hard to fit.

Wow Our brush with greatness lol Sounds really cool must have been exciting...

that is fantastic we have all of the load of the ring movies a fun way to spend a day watching them. now i have to watch they with a new view looking a the shoes. thank you and god bless

WHATTTTT!!!!! OMG!! This is amazing, Jim! It must have been such a rewarding experience for you, working in these huge productions. How I wish I had an opportunity like that. I'm a LOTR geek!! Hey, I can say I somewhat know the film's shoemaker. :)

Hi Anne, yeah you'll need good boots up in Alaska!
Hi Jim. The photos are crappy but that was an old digital camera I bought way back in 1999.
@ Roy, yeah keep looking for the boots or shoes Roy because for all the work I did, you may get to see a few seconds of them!
Nice of you to compliment me Norbert. I LOTR Geek eh? You dress up too and which character?

Love the boots! and what an experience to have in your life..... I am still waiting for my pair of shoes.

Lord OF Rings was a wonderful movie !!i wont forget that one !!Boots look great !!

great experience for sure. Did you actually get to meet the shoe wearers? You had a role too didn't you Jim.

This is pretty exciting Jim. And what an opportunity! Definitely in the right place at the right time:)

What an experience! I'm a big Lord of the Rings fan and have always admired their costumes. Now I know where their shoes come from! Arwen's grey boots are amazing! So did you get to keep some of your pieces of art and do you display them in your workshop?

Wow Jim that is so interesting! You are indeed famous! Can I have your autograph please...????? Pretty please???