I've just read a photo essay on Matador -''Photo Essay From Mexico City: No More Violence Against Women." written by Julie Schwietert Collazo, and came away lost for words apart from one word ringing in my mind- Powerful. Why? Because that essay dragged something to the forefront of my mind.

That word described the photos, and it described the effect on me. In asking why it struck me as it did, I have to say that for some months now I've been wanting to place this photo on my blog, but haven't found the right frame of mind to do so. It needs to be there, and it needs to be written about, and it needs you, the reader to look carefully at the scene depicted, and wonder why so much violence occurs towards women. This picture is of artwork I photographed in the Ethiopian National Museum, Addis Ababa, last August. 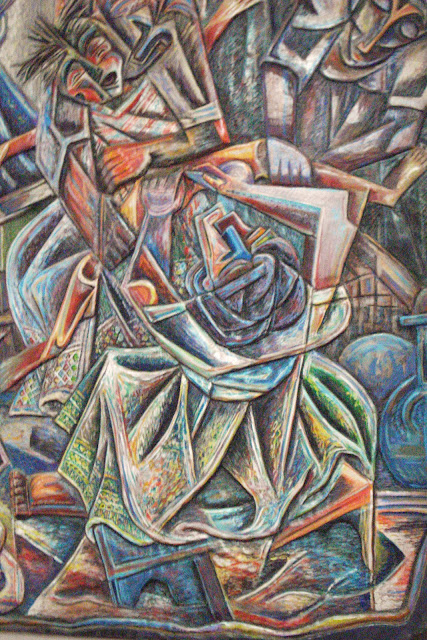 ﻿Like most visitors, we had gone there seeking 'Lucy', the 3.18 million year old skeleton of one of the earliest hominids so far discovered. Recent discoveries elsewhere have been dated back to 4.4 million years, but 'Lucy' remains the most well known early hominid find, and Ethiopia's draw card. The museum has a range of other cultural and historical artefacts, and some contemporary art on display also.

Walking through the museum I came upon a large painting, viewed it briefly, moved on by... turned and went back. Taking another look, my mind couldn't make sense of the jumble of angles and colours. So I walked away again, only to turn and walk back again.

It was the child's face, in the top left, that had reached out and grabbed me and would not let me walk on by without telling me her pain.

This time I had to know what I was seeing, so I stopped and read the sign. The painting is an interpretation of the violence and pain inflicted on a young girl through Female Genital Mutilation. The practice of removing the clitoris, and cutting away parts of the external female genitalia.
Take a careful look at the child, restrained by her own mother, legs held by relatives, while another does the cutting.
Powerful.

I took a note of the artist and title but have mislaid them. But the picture speaks enough for the over 70% of women in Ethiopia who undergo this assault as a child. A practice that will continue until Ethiopian men's attitudes change.

Battling an ancient tradition: Female genital mutilation in Ethiopia
FAFFAN, Ethiopia, 10 July 2006 – These days, Asmah, 6, and her friends Deca, Ferhia and Hassina are secluded from their community. Their legs are tied together and they are told to sleep as much as possible and not to wash; it will help heal their wounds, adults say.

Testimony from women and girls

Hodan, 20, has never gone through the procedure but said she does not consider herself lucky. “All the girls of my age are married. Only I remain single, because people say that I am open,” she complained at the community forum. “If I ever have a daughter, I will make sure she is cut and sealed.”

But another young woman, Kauser, 18, had a different view. “Since the time I was cut I kept bleeding all the time. I am afraid of getting married because I will have to be cut again,” she said.

After hearing testimonies from many women and girls, Fateeh Mohammed Yassin, a single man in his early twenties, remained committed to the tradition. “I do not want a wife who has not been cut at all,” he declared.

Mr. Yassin’s comments illustrate the immense challenge of ending female genital mutilation and cutting in Ethiopia. It will be up to communities themselves to reach consensus on the harm being inflicted on their daughters and ultimately make the collective decision to abandon the practice.

The question is though, with so much violence against women in our cultures, how can we expect Ethiopian men to change, unless we change also?


This practice is not confined to Ethiopia, nor restricted to any religion but is wide spread in many countries in Africa, Middle East and Asia. FGM may even persist in immigrant communities in Western countries. Most countries have outlawed the practice.
wikipedia Female_genital_mutilation

Labels: Ethiopia., Musings and Findings
Email ThisBlogThis!Share to TwitterShare to FacebookShare to Pinterest

GOD help us. There will be the day of reckoning.

Powerful and very sad.
Thanks for speaking out about this barbaric practice, Jim.

Not only in Ethopia does this horror happen.

I remember first reading an article on this many years ago, it shocked me then as much as it does now. However it's their culture and as much as I don't agree with it, how do you change a country's culture and a tradition that has been embedded for years.

When young women in the country are stating they will continue to do it to their own daughters. It shows that it's not just the Ethiopian men you have to get to change.

Thanks for this. That painting is so strong and I would be curious to know who made it if you ever recover those notes. I imagine that depictions of FGM aren't exactly common, which makes the painting especially courageous.

When I was working on part of my undergraduate degree (the women's studies part), we spent a lot of time having abstract academic discussions about whether FGM was "wrong" within culturally relative frameworks. I hated these discussions because they never actually involved talking with or hearing from the people directly involved.

Travel is one of the few ways that we can hear those stories and then share them with others.

You are correct Inka, many countries and cultures practise this. What I thought was significant though was to see that contemporary artists in Ethiopia are speaking out through their work about this.

SJ, the question you raise "... how do you change a country's culture and a tradition that has been embedded for years?." Especially when violence to women in our society is far too common.

Thanks Julie, I'm annoyed I lost those notes. But the painting is as you say strong, and I walked back to it 3 times before I really took it all in, losing my wife in the process (another story...)
I had thought a google search would bring up the artist but perhaps it's a subject some are not prepared to advertise. This site mentions many artists on display at the National Museum, but does not mention that artwork.
http://www.ethiopians.com/arts/nationalmuseum.htm

Yes, this is a terrible tragedy. Unfortunately, men and women are still a long way from being completely equal, even in many Western countries where they don't receive equal pay for equal work, etc. If countries like Australia still have some work to do, I have little hope that third world countries will resolve these issues any time soon. Sorry to be pessimistic...

Agreed that this is a horror that no one should have to live through. Its nice to see people in their own culture stand up against practices that people use "tradition" to hide behind.

I read this and it makes me angry. I haven't deal with this before but my wife has taken trips to Thailand to try and help women in the sex trade industry there and I understand the horrors women have to go through in this area of their lives that men don't have to face.

You really struck a cord with this one. You're so right...often we sit on our western privildged high horse and scoff at other societies taking part in acts we consider barbaric, but it's true that we cannot effectively encouraged much needed change in the rest of the world without first doing the work that needs to be done at home.

Thank you for adding this to the One Wee Voice violence against women campaign. I do hope you'll participate in the next campaign coming up in a few days for child poverty.
http://www.weeman.ca/p/one-wee-voice.html

Thanks KD and everyone else.
Yes the point I was making was that we do need to look at attitudes to women in all cultures, and posting that picture was to make everyone question that perhaps our attitudes in our so-called developed nations are not so far removed from lesser developed after all.

It's unbelievable but it's a true fact against women,I couldn't figure out or understanding such violence. Absolutely everyone who read this should promote it worldwide. I did that, my dear friend, Jim. Yours, Carlos from Brazil, owner of English tips blog.

This is one of the saddest post I have read in a long time. I can't believe this goes on in other countries. We are very lucky to be living where we live. I'll be sharing this story. :(
Jess