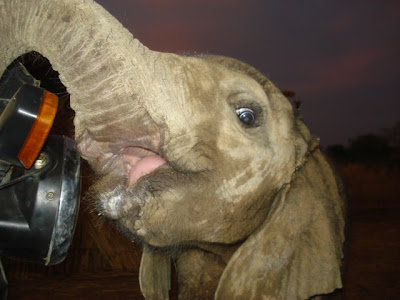 I was advised today that Savi died. I cannot tell you how heartbroken I, and many others are.
Savi represented the hopes of many people that we could save the last of Chad's elephants from the elephant wars that are wiping out the last elephants in the Sahel and Zakouma National Park in Chad.

Central Africa is one of the last regions with a sizable population of African elephant, but their numbers are only a fraction of what they used to be. In Zakouma National Park in Chad there are an estimated 600 elephants. Twenty years ago there were 40,000.

There are suggestions that poachers are killing elephants for their ivory which is then supplied to Chinese backed criminal agents and traded for weapons from China to further spread conflict in the area. Ivory may be funding conflict in Darfur.

Savi was a survivor of these slaughters when her mother was killed by poachers and then rescued by locals lead by Stephanie Vergniault, who went on to found SOS Elephants recently.
This has been a sudden and tragic loss.
I wrote about Stephanie and SOS Elephants last month here-  elephant-wars-in-chad-sos-elephants.html to try and publicise the enormous task they had taken on. Now sadly, the death of Savi has also caused the demise of SOS Elephants as the Chad Government has not been forthcoming with financial support, and the flow of public donations is just not enough to fund the costs of running such an organisation.
So today we have the death of Savi and SOS Elephants, a double tragedy. 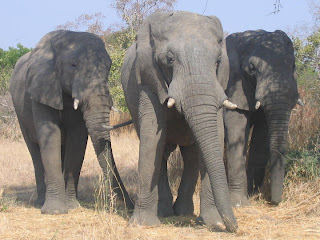 Chad's elephants are on their own.... Once they are gone, which country will face the poachers onslaught?
﻿UPDATE : I have just been advised that SOS Elephants may continue. Thankfully Stephanie is reconsidering a decision made during the stress and heartbreak at Savi's death. When you work your guts out to save these wonderful animals, and you get such sad news, it must take real courage to pick yourself up, find the courage, and continue.

WOW! Those numbers are atrocious and heartbreaking. I knew it was a problem, and a big one, but the sheer number of elephants that have been killed is astounding. Good job at least making people aware of this problem.

This is just heartbreaking. I cannot believe that a government can be so short sighted. With all the talk of looking after our enviroment why are they not helping out? Greed is such a horrid thing!

I am so sorry about Savi. Thanks for posting to Travel Photo Thursday.

So sad! Thank you for bringing awareness to this issue!

Oh that's so sad...people can be savages!

Thanks for the support and concern Christy,Nancie,Kerry-Ann and Adam. I believe travellers like yourselves are very open to aquiring new knowledge about this world and what's happening out there. Perhaps one day this huge network of travelblogs may just want to take up some of these issues and make a change.

Proof, as if we didn't know already, that people can be so cruel.

Thanks for sharing. Such sad news.

So sorry to hear about this. I'm sharing this around - hopefully you bringing awareness to this will help in some small way.

Sorry to hear this sad news. Glad you're helping spread awareness of this awful problem. Will share :)