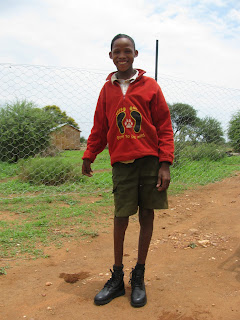 Here is Kanna. Kanna is a San Bushman boy I make custom boots for as he was one of the last survivors of Polio in Namibia. He's not just proudly wearing the boots I made him last year, but also his school uniform as at Naankuse wildlife sanctuary they're teaching all the San kids at the new Clever Cubs School built there especially so the children will get enough basic education so they can enter mainstream schools in Windhoek. There's another  pair on their way to him now being delivered by Russell Frankish from Green Bushpigs Safaris, who stopped over at our home while on a New Zealand tour. We think it's great that Kanna gets an opportunity now in his life to learn at a school .Hopefully when I'm in Namibia next May I'll have the time to get to go kick a soccer ball around with Kanna and the rest of the children.  Perhaps I should clarify that I made them for him and donated them. Least I could do for Naankuse.
﻿

Labels: Musings and Findings
Email ThisBlogThis!Share to TwitterShare to FacebookShare to Pinterest

Wonderful shot Jim! Thanks for joining PTThursday. It's okay to post on Friday....We're all in different time zones:)

He looks so happy and proud. There is nothing more amazing than using travel to touch the life of someone and give them a brighter future. I hope you do get to kick a ball round with him and see how much he has developed.

Look forward to seeing the new shoes and the kick off!

Hey NVR Guys, thanks for the comment. Hopefully I'll get time to get back to play soccer with those kids,

Great story Jim- you are one in a million

@ Kerry-Ann... I'll be posting about the San children and their new school at Naankuse shortly.
@ Red ... he should be getting the new pair for Christmas.

And thanks Solotraveller and Caz, surgical shoes cost a lot so seemed it was appropriate for me to send them over, as I'm able to do that.