Part 1-here
Part 2-here
Dec 27-1st Jan 05
Rather a sombre meet up that evening, for the start day with the Dragoman tour.Great mix of people.And more importantly still a tour! That truck had travelled down from Kathmandu and bush camped north of Chennai, right on the beach at a coastal village the night before.And packed up and headed off on the morning of the 26th around 7am and the Tsunami's first wave had rolled ashore just 2 hours later! Was that village obliterated? Were the children they had played with that night swept away? What would have happened if we hadn't left so early?!
I can recall the group asking those questions.What answers could be given?

As we listened to their conversation,these were a few of the comments made about their last night's tenting on that beach.
And James was talking about how he had been swimming in the sea that evening and walking back to the group and had greeted them saying "That sea feels evil tonight!" Why would he have said that?

And the biggie question now facing our tour was should our tour go ahead,or be diverted elsewhere.No one wanted to be gawking tourists travelling through such devastation, as our tour was going through a lot of the areas hit by the tsunami.
So Babs, our tour leader,co- driver and general party animal rang ahead to a few of the hotels we were to stay at.Their message was imploring us not to cancel but to come, because all other tourists had skedaddled.Without tourists they would not earn any income.All their workers would have to be laid off.They needed us to continue.They needed our dollars! 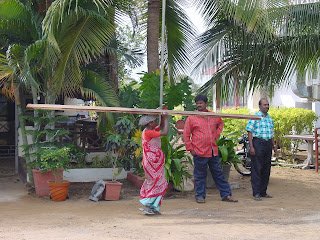 Our Dragoman tour proceeded the following morning down to Mahabalipuram, our first night's stay.A most beautiful city, casuarina lined sandy shores, ancient temples and historical architecture.Here we found our hotel a km from the beach had been washed out.11 bodies had been found in the grounds.Our lodgings were transferred to another wing which had been mildly affected.We couldn't help noticing as we drove up the huge amounts of bedding, sheets, towels which had been recently washed drying on the bushes and trees lining the hotel driveway.And the cleaning up effort, all physical work being done by the women, while the men chose to exercise self importance of pointing out to the women where they should place the planks they were carrying! Well India is a very male dominated society  after all. Mahabalipuram is a wonder of temples and sights. 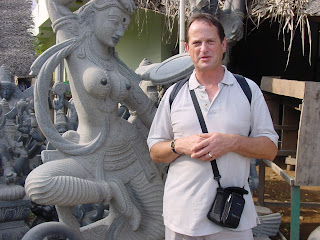 The rock cut caves and temples cut from a single rock are awesome.And wandering along the road where stonemasons and artists show off their art is fascinating.I could have carted that statue home! I think she fell in love with me.Just look at that expression in her eyes! Pure wanton lust for me!
The Shore Temple  is one of the oldest of the south Indian Temples which were constructed in
the Dravidian style.The tsunami had badly damaged this World Heritage listed site and we were unable to visit as it was fenced off.We walked past a line of market stalls all trashed by the tsunami.Here once again the women cleaning and sweeping up,or shovelling mud out of their smashed up ramshackle shops, while men forcefully directed their efforts by telling them what to do!
Many of our group found a restaurant that had managed to reopen and were dragged in by the owner and seated for our midday lunch.An hour and a half later still no food served,(during this time I'd been off to do a bit of shopping down the street ) so I stepped to the rear of the restaurant to find out what the problem was.To see our man cooking all our various dishes over a single camp gas burner!The kitchen had been destroyed.And all his staff had gone to their wrecked village to help their families.He was on his own! 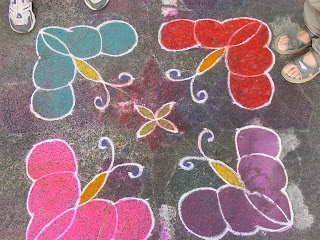 Next stop was Pondicherry that old coastal French territory (up until 1954) that still retains much of that Gallic charm and architecture.Beautiful colourful markets, flowers everywhere, rangoli (the geometrically intricate welcoming patterns on the pavements outside every house) and temples! 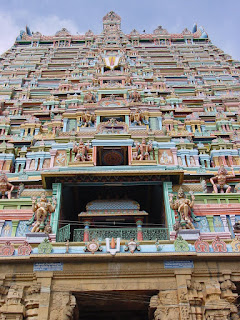 And panic! Absolute mayhem, and we got caught right up in it!.
Our huge overland truck inching it's way through such narrow crowded streets with just inches each side to spare, 5 blocks deep down this narrow road when from the direction of the beach crowds of people come running towards and past us.Some in panic.Others carrying toddlers or household goods.Waving and yelling.All heading the opposite way we were going....and we couldn't turn!
"Wave coming !"we finally hear someone yelling in English! "Wave Coming!"
The evil sea was coming again!Another tsunami!
Well, give Babs our leader and driver her due.Coolly she backed that truck up 5 blocks through those narrow streets.While we sat there wondering should we be running with the crowd.?..or sit there showing outer calm, no sign of fear, because that's what we foreign colonials would have done in the past? Carry on regardless, resolute, setting the stiff upper lip "What ho chum!Old boy!"
I think we all experienced a major bit of panic then, but sat there and stayed with the truck....Actually there was no way we could open the bloody door and run anyway!
We were later to find out the State Government had issued a tsunami warning which had turned out to be a false alarm.
But for us , the upshot was it cleared the last of the patrons out of all the downtown hotels!So when we turn up, and were booking into this cheap, basic concrete bunker of a backpacker type 2 star hotel,managers from hotels up and down the street were following us in, begging "You stay my hotel Sirs.You stay ,I give you cheapest rate!"
An hour later we had the best 5 star hotel in the street to ourselves.
And a few days layover to really explore the town, it's vibrant markets, walk the streets and admire the historical buildings.And to party hard for New Years Eve,...secretly.Because the State Government had decreed that no celebrations would be held for New Year.No parties.No alcohol to be served.Restaurants and hotels to be closed early.There were to be no incidents of foreigners drunk and partying, while India mourned it's dead!
We respected that.
But that night all the doors of our hotel were locked, blinds drawn,lights lowered,non house guests kicked out,....and Dragoman held it's New Year Eve party!And the hotel loved us because we were spending that money they desperately needed. 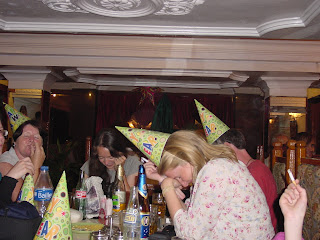 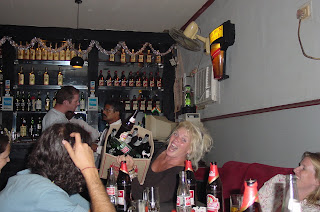 Throughout this tour,faced with the effect of the devastation on people's lives,it was being clearly exampled just how much people depend on tourist dollars.So we didn't see many other tourists.They had taken off. We had carried on, but very aware that they were having to pull their lives back together.And in this traumatic time,in this country where tourism is so important to a family's going hungry or not,the decision to carry on was the correct one.
What we saw and experienced  has meant a lot of soul searching over our travelling.And has profoundly changed the manner of our travels,and where we go and how we go.Nowadays, we choose places and style of travel wherein we can maximise our interaction with communities.Where we can contribute back.Get involved in projects that have an effect at a local level.Volunteer projects, particularly in wildlife conservation that also work closely with locals at a village level.
So no one has yet commented upon my calling this series, Tsunami Blessing. Why? Because it certainly wasn't for over 300,000 people killed in this huge natural catastrophe!
But there was a blessing.And a very personal blessing.Which unexpectedly touched me deeply.
I'll tell you about that in the final chapter.Stick around. 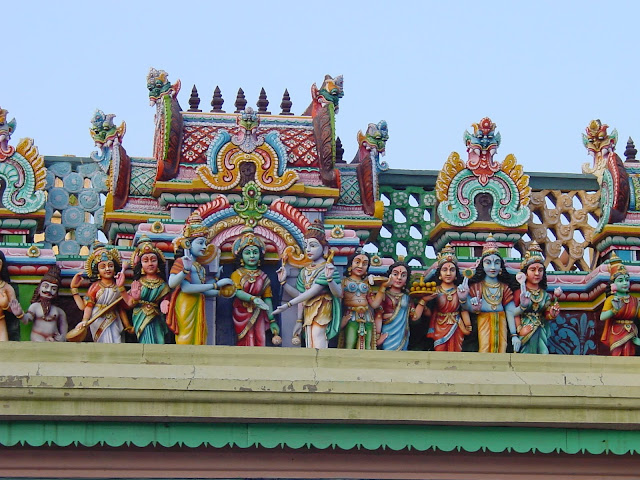