The Face of Beauty. 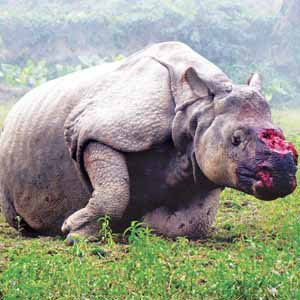 This is the Face of modern beauty today-
Yep do you like this picture?
Do you cringe with disgust and recoil in horror from such a beautiful face, the modern face of youthfulness, of never ageing, of unlined and unblemished perfection?
Hey, it's just a rhino missing half its face, namely it's horns. Don't worry, they've just been chainsawn off while it's still alive but drugged or heavily tranquilised -yes surely-so it didn't feel any pain...until it wears off! And now the Chinese retailers of rhino horn are demanding and paying for the best, and that's got to come from live rhino, not those shot and then hacked off.
No, it's  got to be alive because then it's got the highest potency. And when people around this world have got the dosh to spend trying to beat the effects of ageing to retain their youthful looks, to fool themselves or be in denial that they are ageing or getting more wrinkles, crows feet, and more blemishes, and in desperation seek out  any exotic remedy to beat Nature, it just doesn't matter that a little pill of powdered rhino horn can be bought.
It's only a little bit anyway. Just a little...but that's another rhino doomed!


Well that rhino's face was once beautiful. And one of the most beautiful sights you'll ever see is the face of a rhino, with a full set of horns, and a young rhino beside her. But sadly that rhino will suffer horribly and die. Hopefully a game ranger may euthanise her. 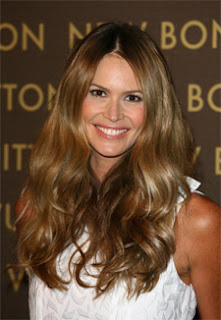 The other face of beauty.

And this is the other face of beauty.
Read the report here-
Elle Eats rhino horn!

She has since recanted and protested it was just a joke.
A joke!
Elle says joke!

This is the reality of rhino poaching, fuelled by it's use in Traditional Chinese Medicine as an aphrodisiac. And powdered rhino horn is also prescribed to treat chest pains, convulsions, snake bites, food poisoning, fevers -anything almost– and now it looks like a new folklore has sprung up around it as an anti-ageing remedy.
How many people reading Elle's outlandish statement may be desperate enough, and rich enough, to want to believe it?
http://www.stoprhinopoaching.com/

South African National Parks (SANParks) reports suggest that rhino poaching in South Africa has escalated even further since the beginning of the year, with 92 rhinos having been lost in the past five months alone.

The Kruger National Park is being particularly hard hit : 33 rhinos have been lost so far this year.
Four of the five rhinoceros species occupy spots on the top 100 EDGE endangered mammals list . 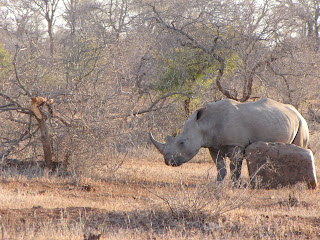 We visited Kruger National Park August last year, and were privileged to view rhino on a number of occasions. Their poor eyesight allowing you to sit quietly in your car,while their massive great bulk amble slowly towards you like a creeping armoured vehicle, cropping the grass as they came. And it was really comical as one used a huge rock to scratch itself.
So this photo is the face of real beauty -a rhino with it's horn- as it should be.

The Face of Beauty.

Thanks Jim for taking a stand, and although the picture of the Rhino with it's horn cut off is pretty hard to stomach; it is an important one to raise awareness. In some perverse way it is actually good that Elle made that comment (even if we want to believe her that it was a joke....yeah right!), because without the hype and fake "Shock - Horror" upset of the mainstream media this whole subject would have never had as much publicity as it now has. It is important to keep the pressure up and turn this into a similar global awareness campaign like the whaling issue. Good on you, keep up the great work! Like your site,love your writing.

I agree it's not a subject that you can be nice about.With poaching escalating in Africa, the message needs to be spread in the media and that seems to only react when there's shock value in the story.
Thanks for the comments on the site and the writing.Can only improve.:-)

Wow, that is awful. Thank you for writing about this and raising awareness.

Thanks Kristine.There's a further blog to follow, and sorry it will be a follow up to the rhino's fate posted above.And sadly she is one of many, live butchered rhino recently.

Oh will we never learn? This is shocking. And all so a few stupid women can feel that they look more beautiful.

This is what people don't see (and know) when they look for "artificial" beauty. It's a shame these things are happening.