The Tsunami had hit the East Coast of India on the morning of our arrival day in Chennai, wreaking destruction all along the  east coastline.Luckily Chennai city itself was spared major damage because it's major port and breakwaters took the brunt, although many ships were damaged and lives lost in the harbour area.We had arrived in the city late that evening, unaware of the event.
The following day was our start day with Dragoman,on an overland truck tour from Chennai down the South East Coast to Cape Comorin and up the west side to Goa and finish at Mumbai.
Dragoman Chennai to Mumbai
It's amazing how blissfully unaware we were that this destruction was having on our friends and family back home.Being in the strike zone you don't get the same perspective of the calamity, that they were getting back home.We were seeing very little evidence,but  TV news gives a roundup of all the worst bits of disaster, and runs them together endlessly.So they were panicking for our survival....we were out sightseeing.They were ringing our travel agent,airlines, embassies etc...we hardly even thought about ringing them or even emailing.We've been told off about that.I think the kids were even thinking how much the inheritance was....
So Kay, Lynley, (our close friend and travel companion) and I met up with another traveller for the Dragoman trip, Patrick( a guy who seems to wander up and down mountains around this world's 7 continents, when not cycling in far off places) and we all hired a taxi for the day and took off sightseeing.Now Indian taxi drivers will try to  rip you off.So we had written down on paper the places we wanted to see.And I'm sure this driver feigns not being an English speaker and takes off with his car full of hijacked passengers.He kept on saying 'Go Mahabalipuram", but we didn't want to go there, because that was first stop on our tour.But half an hour later, we figure we're halfway there and this taxi driver wants to run up a huge taxi bill. So it was a very surly driver that finally turned around after 4 very irate passengers threatened to thump him.Gee you've got to have your wits about you with Indian taxi drivers.Never a word out of him for the rest of our tour, as he sunk into his silence.I'm sure he wanted to get back at us.
But we got to see Fort St George and St Mary's Church.Then off to Santhome Basilica.Built over the tomb of Saint Thomas, and that's unusual as only 2 other churches in the world are built over the tombs of Saints.The others are Basilica of Saint Peter built over the tomb of St.Peter in Rome,and the Cathedral of Santiago de Compostela built over the tomb of St.James in Spain.  Even more interesting is that Saint Peter arrived in Chennai way back in AD 52.Spreading Christianity long before the arrival of the Portuguese. 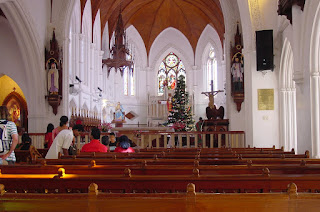 Basilica of Santhome
So that was a must see for us.
The inside has been renovated recently and is well worth viewing.

But it was outside when the stark face of the tsunami disaster hit us.Outside,  to the rear of the Basilica were groups of men and women crowded into a large semi open sided warehouse type building.Some were cooking.Others lined up at a makeshift kitchen being served a small bowl of rice with nothing else added to it.I struck up a conversation with a local and was told that these were survivors of the tsunami.
"The fisher people from the beach ,the children were washed away sir!". 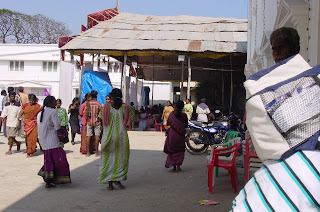 And for so many families there, there were so few young children......
The Church had opened it's heart to the people of all faiths,and were feeding the masses.
We found a Church aide taking donations and gave what we had.Simply not enough.These were people who not only had lost loved ones, but all their few possessions, all their clothing,even basic cooking utensils.These are the survivors of the fishing families that lived in makeshift huts, eking out their precarious living and raising their lost children amongst their boats,along the adjacent beach.And along with the wave went their livelihoods.Their fishing boats smashed, their nets shredded, and other gear swept away.
I only took 1 photo as I had no wish to intrude further. 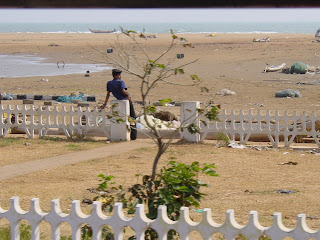 And we'd had enough sightseeing.This really put us off .But we asked our still surly driver to take us along the beach to see the wave damage.It was only now beginning to sink in just how much devastation had occurred, so surely we'd be able to see it as we drove past.
But to us as we drove slowly by, there seemed to be very little.No real damage to see.No bodies, no smashed huts or wreckage.Where was it all?We couldn't get on to the beach as the police were keeping everyone off it.So I remarked "Doesn't seem to be much damage to see here!"
"16,000 people lived on that beach sir."came the quiet reply from our driver."The wave swept them away".
This gawking tourist cringed, as that driver set his knife of revenge in and twisted it!
That sticks in my mind.
What was more frightening about the tsunami strike on India , we were to read in the newspaper when we got back to our hotel.India has 27 nuclear reactors, most placed around it's coastline, where desalination plants supply cooling system water.Imagine reading how the tsunami caused major damage and 50 deaths at the  nuclear power plant worker's village,just 80 kilometres away from Chennai! Luckily, no sea water entered the cooling system intakes.
More to follow.Bookmark this.