Here is a little story of one of those great days in our travels... possibly the day we look back upon with the greatest and fondest memories.

Our family sponsor 6 children around the world. We travel when we can.
In April 2006 we arranged with Childfund ( http://www.childfund.org.nz/index.html ) to visit a child we sponsor, her family, and their village, in Jharkhand state, west of Calcutta, India. This was organised through Childfund with the Sisters of the Carmel High School in Chakradharpur, Jharkhand state which is next to Bihar. Both states are noted for relatively high incidents of banditry, and Naxalite rebel activity. So, with a little trepidation about our foray into unknown areas, we made our bookings and crossed our fingers.

We travelled 6 hours by train from Calcutta, arriving in Chakradharpur at 11 am in 40 degrees heat. We noted, that the Carmel sisters had every platform staked out making sure two dumb foreigners didn't wander away from the station to be hijacked by Naxalites, or bandits, and perhaps never be seen again. Or held for ransom (I'm sure they'd want plenty for us!). The Carmel sisters made us very welcome, taking us to their headquarters at the Carmel High School of 840 pupils. They also operate a renowned hospital in that city. Kay and I were then driven to a village 1 hour out in this dry, dusty countryside, where, we had been told, a few people were waiting for us.

Not expecting much of ado about our arrival, what a surprise to see this as we drove up.
I managed a quick shot through the windscreen. 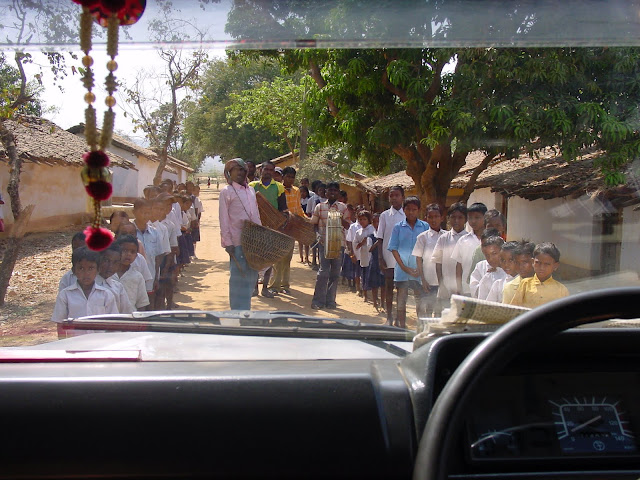 Imagine arriving at a reception of 200 villagers, flags, drums, many of the children gaily dressed in their school uniforms, then being the centre of the procession for a kilometre through the village to the family's humble house.
We have this all on video and stills as I gave the video and camera to locals to use with no fear of them being stolen. It's not often that the King and Queen of New Zealand arrive up to visit a poor village in the middle of India! I remembered to do the royal hand wave. 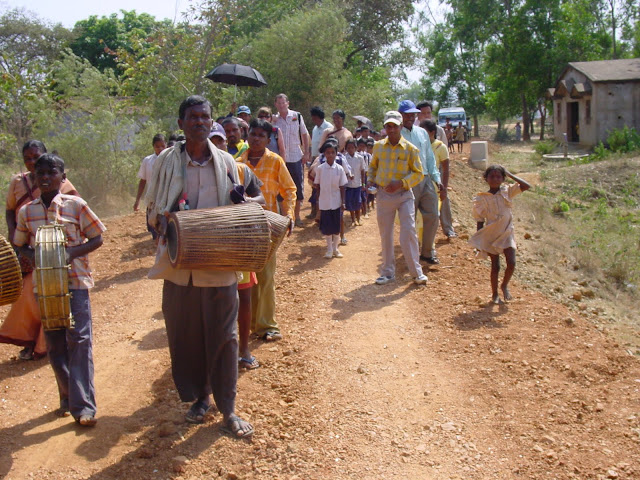 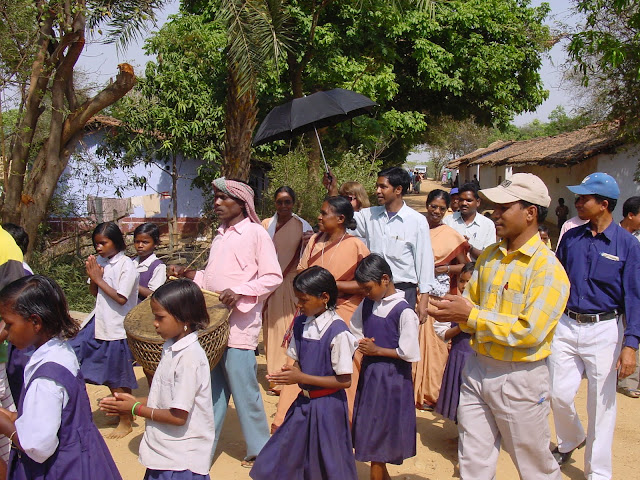 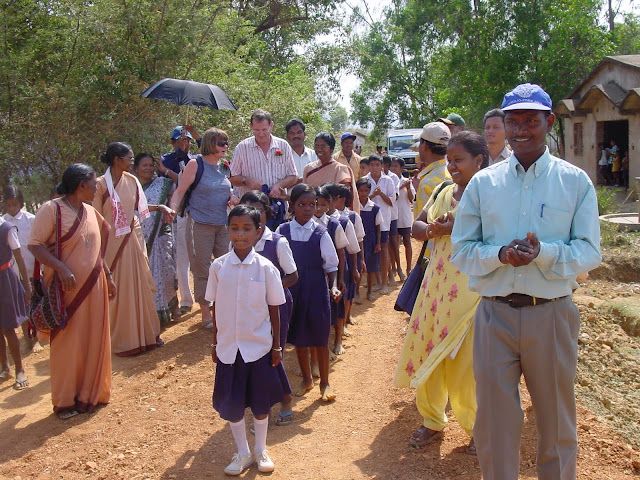 We met 'our' child Savitri, and her family, at their house, where a shade tarpaulin was rigged up and a modest meal was waiting. 200 or more villagers crowded around, all taking the chance to have a full days celebration of food, rice beer, and dancing. Rice beer is very refreshing. I drank plenty. Later on, being shown through their house, we saw how it was made - mud brick, and asbestos roof covered with rice straw to insulate from the sun. A few very small windows, so very dark inside. No electricity or running water.
But spotless throughout. 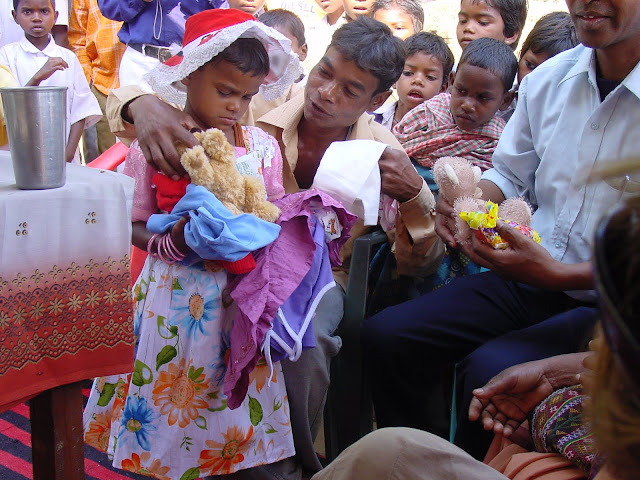 In one large room was stored their paddy. Paddy is the unhusked rice. This is stored in an ingeniously simple container made of coiled rope. As it is filled, the rope is coiled higher on itself creating a huge barrel-like container. But open to all the rats and mice... and their droppings probably gave that rice beer extra flavour!

In times of good harvest, once a year after the post-monsoon planting, the rice rope barrel will be full. But every 3 or 4 years the monsoon does not arrive. Hence, the village started an irrigation project to pump water to a high reservoir, then gravity feed their fields. This would allow them to cash-crop vegetables all year round to sell in the local markets. 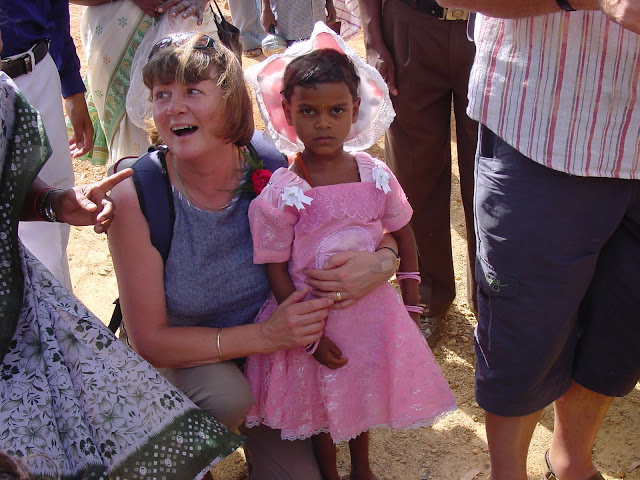 Joy and consternation.
Soon after this, Savitri was in tears.It was just too much for her.

We were truly impressed with the sheer joy, and natural grace and exuberance of these tribespersons who are the poorest of the poor. We, with all our modern luxuries, I doubt are any happier.

Coming back to the Carmel School that evening, we were over-nighted in a clean, simple guestroom. Kay remarked how she'd love to live another day like that. We were thoroughly exhausted and overwhelmed.

At the village, during our discussions via our host Sister Bernadette, we learned that their irrigation system was stalled as they had no money to buy the needed diesel irrigation pump to pump water when the river was flowing up to the reservoir. So how could we not make the offer? We gave the village headman, and Savitri's father, an undertaking that we would find the $US1,000 for them. Well, they had killed one of their 3 chickens for us.

So we came home and raised the money for their diesel pump.

We later learned that the head Sister, who had shown us such kindness, had been very ill when we were there. And on her death bed, she had asked whether we had yet sent up the money we had promised.
When it arrived, they were able to tell her. Sister Bernadette died soon after, happy when she knew the village they cared for would get their pump.

When we learned of this, we asked Childfund to arrange to call the diesel pump after her, as a lasting monument for the work that their Christian organisation undertakes with India's poor.

A year after our visit, we received photos and a letter from the Carmel sisters of the dedication ceremony for the pump. So imagine how we felt when we looked at the photos- all the village children playing under this big plume of water, gushing out of the pump.

And there, in huge gay writing across the pump, was written ''Sister Bernadette's pump"!

Editor's note- re-reading this has decided us to return. That pump is probably due to be replaced.

Labels: India 2006
Email ThisBlogThis!Share to TwitterShare to FacebookShare to Pinterest

That is a wonderful story to read, just the kind of real life experiences I like. Keep it up. Found you thru the TBEX post.

Incredible India and I happen to be from there. Not Jharkhand , but Kerala :)