When you drive down Scotland’s A86
From Kingussie to Roy Bridge,
Through Glen Spean, past Murlaggan then
There’s a church up on the ridge.
Just 5 miles nor’ of Inverroy
Take the right turn up the track.
The key you get from the house on the left:
Remember to place it back.


When freedom was sought,
And the Bonnie Prince brought
The clansmen to the moor,
The heart of the Highlands bled that day
To the sound of the cannons' roar.
In the battle there at Chulodair,
The ball and the grapeshot tore
Into plaid lines: in that killing time
Eoghan Ruadh was wounded sore.

Brave Mackintosh kin they rallied to him,
From the battlefield, they bore
Their revered chief to his wife’s grief
At Cille Choirill’s door.
His secreted grave from the Redcoat rampage
Well hidden beneath the floor;
So when you walk in, remember him
And all that he fought for.

On the blessed hill of Tom-an-Aingeal,
Gaelic for “Angel’s mound”,
To minister in Lochaber came
Monk Cairell from west Eire bound.
To spread the faith; his name would grace
The church built on that ground,
Where mighty Keppoch chiefs lie at rest
Within stone-walled surround.


On birch and pine-clad Angel's Mound,
His deeds the worst e're known,
Ailean nan Creach- or so they preach-
His labours to atone,
The Pope ordained for Ailean to maintain
Seven chapels built of stone.
Through centuries use, and then disuse
The wee church has stood alone.


Now renovated, and re-dedicated,
The church that stands there still.
Does Red Ewen ken how his descendants then
Be pilgrims to Angel Hill?
The ancient bones ‘neath old gravestones,
At peace on Tom-an-Aingeal,
Welcome locals and travellers to
The door of Cille Choirill.


Child of the Scottish Diaspora,
When you seek your ancient name,
And you see Scotland's great glen and brae,
Do you feel you have come home?
When you stand in awe of scenic splendour
Upon blessed Angel Hill,
Can you feel your kin embracing you?
Welcome to Cille Choirill. 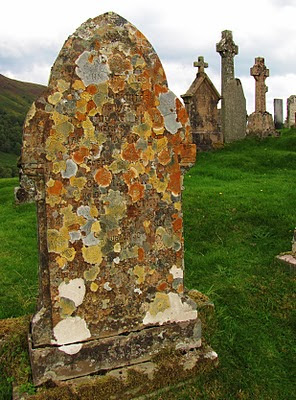 All pictures and lyrics by Jim McIntosh.

Cille Choirill has been featured in TV and motion picture films whenever a typical Scottish period church scene is needed, so will be familiar to some readers, yet its history unknown. You'll see it in "Monarch of the Glen" and the outstanding film "Joyeux Noel". Look for it in the opening scenes where Scotsmen are depicted preparing to leave their village to head off to war.


Around 600AD, Cairell ( later Saint Cairell)  travelled from the west of Ireland, probably via Iona, to establish Christianity based at Tom Aingeal, and gave his name to Cille Choirill. Cairell has been spelt in different ways through the ages. You will find his name in many places in Western Scotland: Pitkerrald in Glen Urquhart, and Caral's Well and Caral's Cairn in Banffshire. St Cairell or St Coireall is said to be buried in his native Ireland's Clonkeen-Kerril.

Beautiful photographs. If there was no commentary I would have assumed this was Ireland!

to read Gaelic is a thrill, i have not heard it spoke is forty years and do not recall the meaning and stumble on pronouncing the words but they speak to me. thank you Jim for waking the dead in me god bless oh to be of Scottish soil god bless

That's interesting to know about 'The Highlander" I'll do some research on that Roy thanks.

beautiful post. Interesting and educational, thank you for sharing this.

They do look similar Hocam. And history of both is very much shared.

Thanks Jan. Glad you enjoyed it. Have you retraced your family history?

Thanks Theodora. What do you mean Crazy poem? That's a ballad, a folksong I just happened to dream up.

love this - when we were at culloden, it was a grey and rainy day. happy to see it in the sunshine!

It was the same when we visited Wandering Educators. I lightened the photo up a wee bit but you can still tell from the clouds how grey and rainy it was. Very spooky place.

Love the poetry! Keep this up! I too thought it was Ireland if I didnt' read your commentary!

Thanks Shirlene. I guess both countries may share similar features.
Thanks for the vote on the poetry...yeah may be inspired to do more.

Briliant Jim! So good I reckon you should forward it to Billy Connolly and he would put it to music - I can just hear it now! I'm serious!

Got his address John!?
Ya reckon mate?

What started out as a travel destination article but then when writing the words they seemed to form rhyming lines so I just went with that instinct. It became an exercise in horizontal and vertical rhyme- even within some sentences it was quite easy to pull up 3 or four rhymes and maintain the tempo. I laughed when I came up with - The Pope ordained Ailean maintain... and then the - Does Red Ewen ken his descendants then.... I thought I was overdoing it. But then it all fits within the melody I wrote it to.

Fantastic - you have a talent for poetry.

I love the interior of Cille Choirelle and the view is a dream. I love churches and this one looks like a gem.

the graveyard and grave stone photos are creepy and beautiful at the same time!

Loved this one, mate. The photos were a really nice accompaniment to the poem, and I really dug the rhyming scheme you used as well. Very old school.

I really do need to integrate poetry back into my writing again. You've painted a vivid picture of what looks to be a fascinating and beautiful place.

I love how you embrace poetry on your blog Jim! You are following your passions and not paying attention to those who say it can't be done. you prove it can~!
I love it and I love the pictures

Hi Caz, thanks for that, very welcome encouragement. I think the subject just lends itself to that approach though, could be a straight narrative like my earlier one on Cille Choirill but I just instinctively felt this was the way it had to be done. .

I cannot tell you how much I enjoyed this Jim! This post was the most enjoyable post I have read in a long time. Awesome pictures, awesome facts, awesome verse, awesome history - it has it all and more! Very well done and thank you.

Gee, thanks Elizabeth. Barbara Weibel from Hole in the Donut Cultural travels posted this on Facebook and so was good to see it revived.
Glad you enjoyed it. You sound like you have a bit of Scots in your blood.

gorgeous, gorgeous photos -- especially the one looking past the tombstones to the church in the distance. great perspective.

Hi Jim
Brought a lump to my throat that story.
Nice to see you keeping up the reputation of a very brave man. I am a descendant of Eoghan myself still resident in Brae Lochaber so probably a cousin of your own.
Our tradition has it that Eoghan was a sergeant in the Keppoch Regiment of the Highland Army and fought throughout the entire campaign joining at the raising of the standard at Glenfinnan was at all the battles including the march to Derby and back. His heroism was noted at the Battle of Falkirk where he was wounded protecting his dying captain. In spite of an inextractible musket ball in his shoulder he continued to join the fight at Culloden. When wounded by grape shot to his legs his comrades put him on a pony with which he made his way alive back to Lochaber. We understood he later died of his wounds here concealed by his relations before burial in a place of honour behind the door within the chapel walls.
My late uncle composed a lovely wee tune in praise of Cille Choirril which I can forward to you.

Hi Kenny,
Good to read your extra info. I'd love to hear the tune your late uncle composed!
And you just may see us back there this year Kenny so keep a wee dram of your best Whisky available! Would love to meet up!

BTW what was Eoghan's position in the community?

Hi Jim
I don t know for sure but I think he was an ordinary clansman the assumption is that he was a farmer the same as lot of his comrades. Every Highlander considered themselves an equal and their ancestry was very important. He would have been able to trace his ancestry back to 1st Mackintosh chief.
Look me up if you're back in Lochaber I can show you the ruins where your ancestors lived in Glernroy
dram's not a problem
lyrics

Oh where in the whole world, such beauty and grace,
As Cille Chairill in the braes of Lochaber,
'Neath the green mossy mounds many clans lie asleep,
All around are the hills they did wander.
In this heaven on earth rest ancestors blest;
Their children so true, shall never forget
Till the hills fade away and the last tune is played,
With love, they will always remember.
tune to follow

I wonder about Eoghan's standing in the community. When you think about the tragic Culloden charge, and the chaos and devastating effect of grapeshot, musket volley, and bayonet upon the Highlanders in such a short bttle, followed up by cavalry charge and slaughter of those wounded on the field, I cannot but wonder how some valiant few took the time to carry Eoghan from the field of battle when so many were left.
He must have been held in high esteem by those who risked all to carry him off and smuggle him back to home so far away.
Either he held some community ranking, or he was truly admired by his fellow rebels?

As a sergeant he would have had his own troop and obviously gained huge respect. Remember the clan regiments consisted of kinsmen, brothers fathers/ sons, cousins fighting side by side so they would look after their own. Interestingly only one Lochaber Mackintosh, Angus, was taken prisoner after the battle he was possibly a brother of Eoghan, he was transported to america and never heard of again. I think that the rest would have been wiped out as they were in the front line. The Irish Cavalry brigade you mentioned elsewhere covered the retreat of Clan Donald, which would have included Eoghan, from the field and they are credited with preventing a lot more casualties.

I was thrilled to find this site. My Uncle Joe Brady has done some research and we are also decendents of Eoghan. My great Uncle Ronnie Hendry (my Grandma's brother - Mary (Hendry) Brady) was the Monseignor at St. Margaret's Church of Roy Bridge, Inverness-Shire. He has since passed. I hope to bring my family to Scotland sometime and will certainly hope to come to this church.
Maureen (Brady) Leonard, Farmington Hills, Michigan, USA

Hi Maureen, glad to see you enjoyed my wee ballad. Did you note the comment above yours regarding Angus, Eoghan's brother who was transported to Nth America? Not where your line of ancestry is involved is it?