Ever since I read Charles Darwin's "Origin Of Species" as a 10 year old, I have been fascinated with Galapagos Islands. They were our first choice for my wife and I to celebrate our 40th wedding anniversary this past January. Finally a dream comes true! 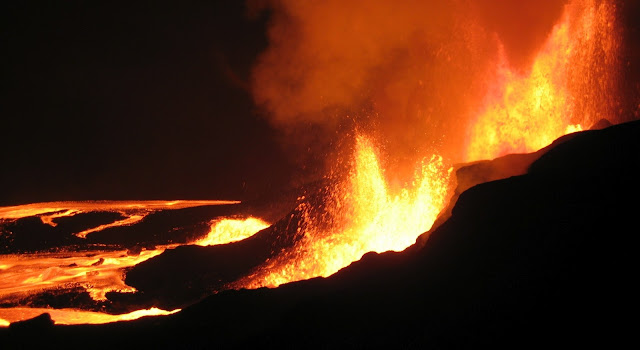 Barren volcanic archipelago,
Formed by violent conflict down below
Where Nazca, Pacifica and Cusco
Constantly struggle to and fro. 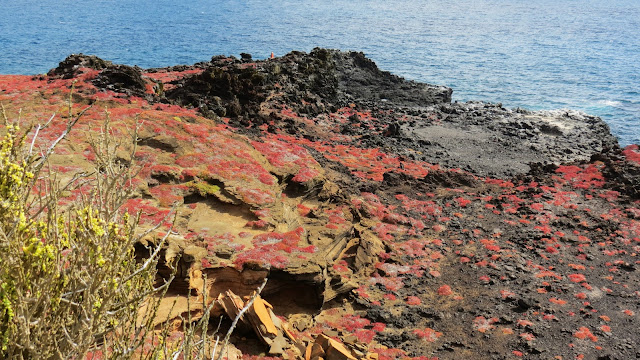 In these isolated and virgin lands,
Nature painted a different plan
Far from the interfering hands
Of that worst of predators- Man!

The harshest evolutionary course
Awaited the toughest participants
Unlucky to wash upon these shores:
Death for the losing contestants. 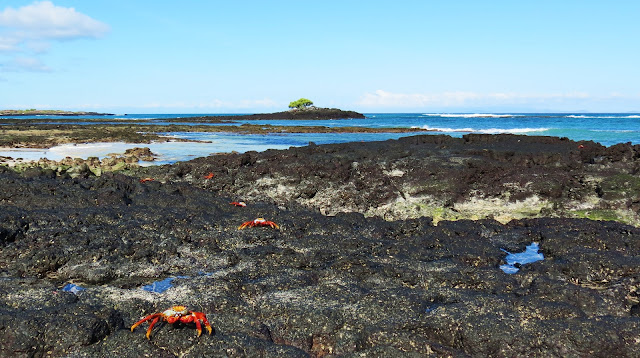 On jungle mainland, the blustery
Storm destroys an ancient tree,
And washes it down the river valley
Where currents carry it far to sea.

Though waves attack her plant life-station,
She clings on to the vegetation
Deep in suspended animation:
A refugee in enforced migration. 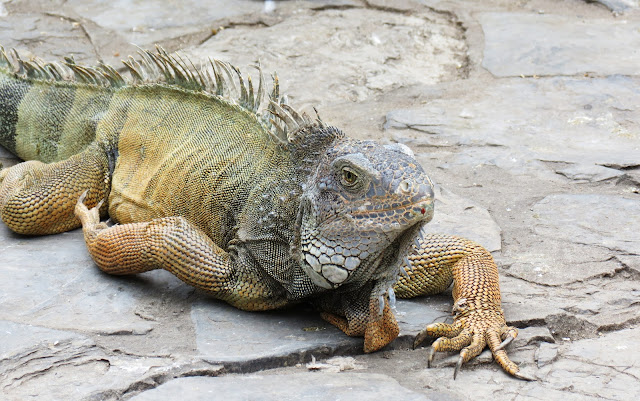 She washes ashore one stormy day.
Land she grasps with desperate claws,
And struggles through chill surf to lay
A tenuous hold on these barren shores.

Would fate have her survive and stay?
Or starve to death and then decay,
Just like each other poor castaway
Who had fertilized this barren bay? 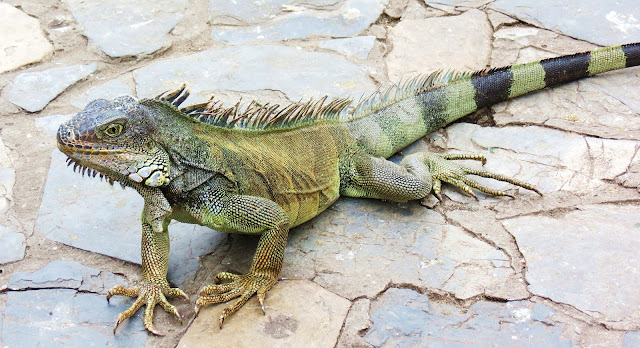 Her slender, lithe and sinuous form-
Now unsuited for this harsh terrain-
While in jungle homeland trees the norm:
Here evolution would be set in train.

In the weeks she fights to stay alive,
The birthing of her young to arrive.
And from the few who will survive
New species Nature will contrive. 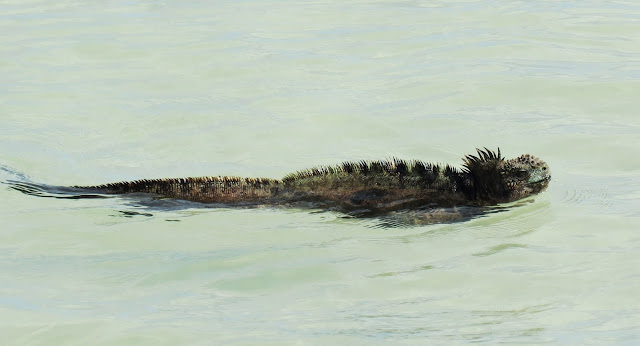 And from her brood one stumpy male
With shortened snout and paddle-tail,
To swim and forage he will prevail,
While all his siblings eventually fail.

When washed ashore one stormy morn,
Another spies this lonesome male.
And from their union more are born
With shortened snout and paddle-tail. 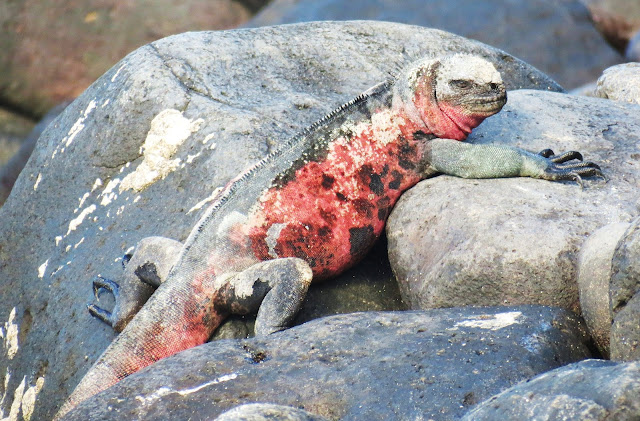 In harsh and trying circumstance,
Sustaining traits Nature will enhance.
Those that adapt have better chance:
Natural selection, not happen-stance.

Marine iguanas scientists say,
Are merely Nature's adaptive way
Of how tree iguana have held sway
When mainland floods cast them away.

In reality, establishment of a new species on these islands would take many millions of years of castaways arriving and perishing there, but eventually a pregnant female would eke out a precarious existence and establish a line of descendants that would become our modern Land and Marine Iguana. 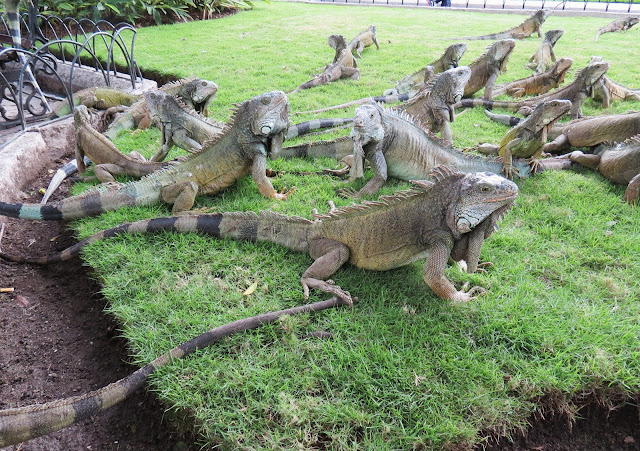 
From the mainland Tree Iguana, Galapagos Islands Marine and Land Iguana are thought to have evolved. Rafts of vegetation are washed down mainland Ecuadorian rivers and out to sea carrying any animals clinging to it, most to perish in the waves. Being cold blooded, reptiles are able to survive long periods without food or water clinging to floating debris where cold temperatures will send them into inactivity or stupor. 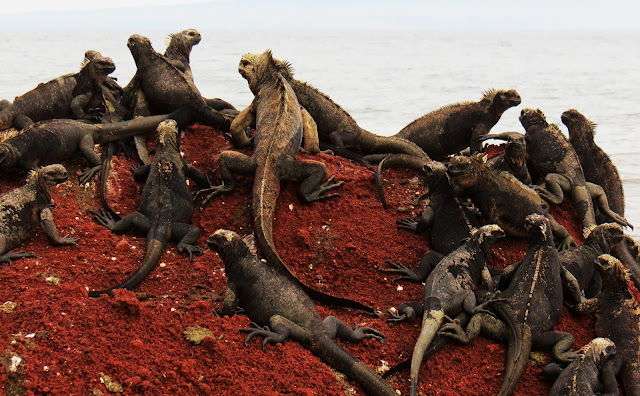 
Probability is that during the millions of years since early Tree Iguana were first washed ashore on Galapagos to adapt and survive there, the Tree Iguana on the mainland has also evolved further specialized adaptive features from the common ancestor of both. 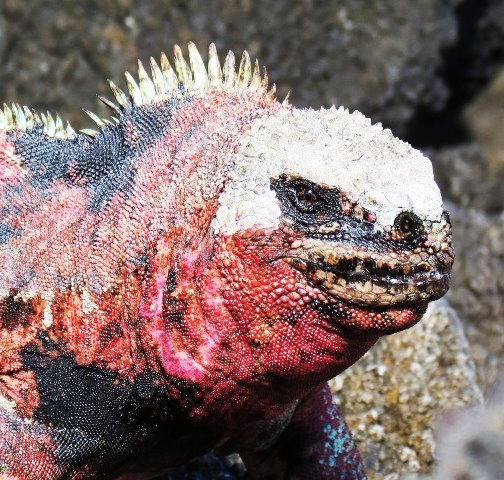 Shortened snouts and widened mouths for cropping the algae and seaweed which it feeds on. Tails are flattened vertically to allow it to be an excellent and agile swimmer. Marine Iguana vary in size and coloration from island to island and the those of Floreana Island are the most colorful of all. 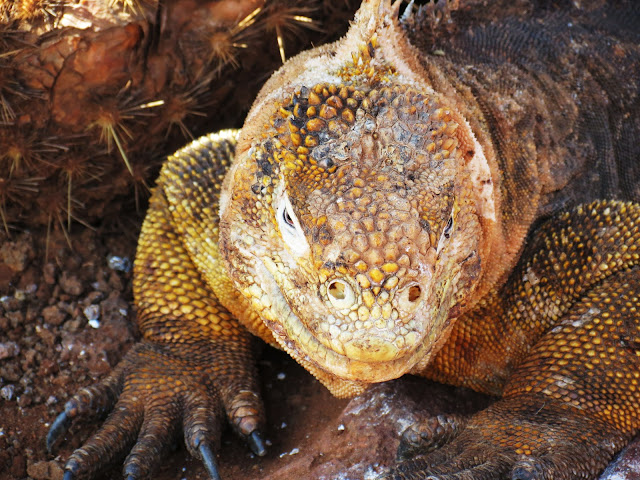 Note the different snout characteristics. Heavier and generally larger than the marine specie, its diet is mainly vegetation of which Opuntia would be around 80% from which it derives water. It will also eat insects or carrion. We observed one climbing a low bush to get to a frigate bird's nest, presumably after the eggs, but the weak branches would not support its weight and it fell a metre to the ground.

Happy belated anniversary and thank you for sharing these mighty photographs and the Genesis of words creating wonderful mental imagery! I loved it all.

The Galapagos seem like such a magical place. I hope I can make it there someday.

What a cool creature.

Visiting the Galapagus Island has always been a dream of mine too.

I love, Love, LOVE your poem. You should submit it to literary magazines. It's fabulous.

Thanks Jennifer. I had started typing out the usual sort of narrative on Marine Iguana then scrubbed it,and wrote the above instead.

Thanks Leah. Was the only anniversary Kay did not attend,- she was sick and took to her bed that evening!
Glad you liked the pics and the prose they inspired!

Put it right up top of your list Scott!

I thought you'd like it Barbara. Did you get to the Iguana Park in Guayaquil?
We spent hours there. Incredible place!

I loved everything about this post too! The poem was sweet, rhythmic and rhyming (yay!). The pictures are just gorgous as well. So many different iguanas! :)

the shot with several iguanas made me cringe LOL. the creature is so lucky to have you shoot them. and at that close a range, huh!