{This Moment} - A Friday ritual. A single photo - no words - capturing a moment from the week. A simple, special, extraordinary moment. A moment I want to pause, savor and remember.

Adopted from Soulemama. Drop in there and leave your link and comments also.

If you're inspired to do the same, leave a link to your 'moment' in the comments for all to find and see. 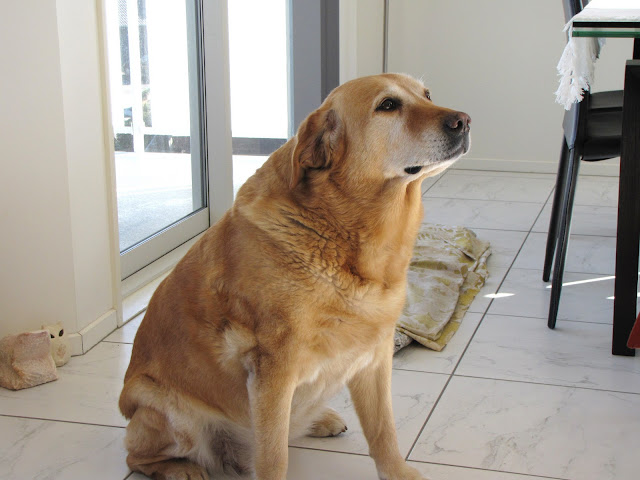 I need you to ask about this dog. She's not mine but rather special.
OK, I'll tell you about her.

I don't write much about the Christchurch earthquakes because the psychological trauma is hard for outsiders to truly understand. But I do know that our many friends and families have gone through all the range of emotions we humans can experience; physical sickness, terror, numbness, anger and frustration are known to them, and deeply.

So those are their stories to tell, because I would not be able to write them as they should be.

3 weeks ago we flew down, hired a car from Allways Rentals,-( thanks Merav ), and tiki-toured around Christchurch and caught up with rellies and friends. My sister was so glad to have us stay a night and she relived the event and the subsequent ongoing aftershocks, by telling us vividly about the quakes and the effects that they have had on their lives. 3 major quakes and over 8,000 aftershocks have rocked Christchurch in the past 12 months.

When the second big quake struck Christchurch in February, my sister's house, built on Huntsbury Hills area of the Cashmere Hills which lie between Christchurch and Lyttleton, was very badly shaken and damaged. My brother-in-law is an engineer for a major roading contracting company, and he explained they believe the land was violently thrust up, then resettled somewhat but leaving that area 400 mms higher. While the house is still standing and liveable, all the interior and exterior cladding joins are busted open. Many houses around them are to be demolished. Roads were buckled and upthrusted. Chasms appeared. Roofs and block walls toppled. Rocks the size of cars bounced down the slopes. Terrified dogs and cats disappeared.

Honey is my sister's family dog, a sweet natured, sensitive animal, as all Newfoundlands are of course. Terrified, she fled. My sister's family searched the neighbourhood all day, along with many other residents also seeking their loved pets.  Eventually next night, Honey turned up at their door, bringing with her a bunch of other scared dogs! 5 other dogs who had run off and couldn't find their way home.

Can you imagine how those animals feeling sheer terror had sought out each other's company, forming a pack for comfort?

"OK guys, let's buddy up. Big hugs. Umm...anyone know their way back home?"
"Nope."
"Oh well, you can all come home with me then. I think we live up there somewhere."
"You think they'll mind?"
"Nope. I'll let them know you're my buddies now."

Such a sweet little story. So in the depths of human disaster, there needs to be thought given to our pets. When the SPCA launched their appeal for desperately needed funds to put on extra staff to help locate all the stray animals, and  provide feed and shelter until re-united with owners, we contributed heavily.
Our pets are our family.
We need to consider them also.

So I assume they were all eventually reunited?
Dog lover ;)

Hi Linda,
yes eventually. Many people seeking their dogs just knocked on any doors until they found someone looking after their dog or cat.

What a great story that came out of tragedy! I have had a dog almost my entire life. The one I have now just turned 10 years old. He has been a friend and a comfort in bad times and I can only imagine how much those dogs meant to those families. Great story Jim!

You're so right Jeremy. It'll be a sad day in your lives when your dog finally goes. In fact, the main reason why we don't travel full time or take months off to travel is because we can't leave our rescue mutt in dog kennels too long. She comes to work with me everyday, howling along to Dwight Yokum's Cattle Call, and the local fire siren. But I have decided, that when she's gone, I'm gone travelling! I don't think I could bear working on my own without her now.

How wonderful is that. Dogs are such fascinating animals. Their loyalty is boundless. I am so happy for your family that they were reunited.

That is such a lovely story and all the more poignant because it is definitely true. What a sweet looking dog. I can just picture him turning up on his doorstep with all his little scared friends. Gulp.

I don't think I was frowning, but I'm sure I wasn't really smiling til I read this great story. Now I'm grinning. Thank you to you and the pack.

Great story Jim :) And what a sweet natured looking dog!

Your posts and moments always have such interesting stories behind them. Thank you Jim for sharing this today.

Awwwww, so sweet! Honey helped the little lost pups. I love it. :)

Beautiful story and photo. My son and his wife are highly trained search and rescue people working with both their Sheriff's Dept and County. As horse ranchers they rescue horses/cattle during/after natural disasters, a group rescues small animals. They also search for hikers etc. The whole process is very coordinated and very rewarding, whether looking for humans or animals. It's a much needed volunteer job as your post says. How interesting that the dogs banded together into a family!! So wonderful.

Such a nice story. I´m glad she was safe.