Welcome to another Magnificent Monday and this week the theme is
'Street Performers.'

Those zany, gifted or extrovert entertainers game enough, or desperate enough to get out and perform in front of the public bring music to our lives, and brighten our streets. Whether it's with an old battered guitar and a cap with a few coins in it on the ground, or a painted face performing mime to passers-by who  re-act as if they just didn't see them, I'll stop and listen, and drop a few dollars down. I love them. They're gutsy people.

Strange how so many times we've come across a lone performer, and we stop, listen and enjoy them, and soon because we have stopped, others do also. Our actions seem to be the catalyst to begin the crowd-making process.


During the day in my workshop I listen to their music all day long. I collect CDs from our travels - so many were purchased from street musicians: marimba or male choral groups from Cape Town's Waterfront, percussion music of amputees at Cambodia's Angkor Wat, a lady balalaika player at the Museum of Wooden Architecture near Irkutsk, heaps more : you could chart our travels by my CD collection.

In August 2009, Russell Frankish of Green Bushpig Safaris, arranged our private 17 day safari which included a few days in the Kingdom of Swaziland, that rather mountainous country landlocked between South Africa and Mozambique. Most people are poor, and any economic improvement is jeopardised by having a high rate of HIV infection among its population. Our guide/driver urged us to be aware that we need be careful, as tourists are seen as having immense wealth for the grabbing. 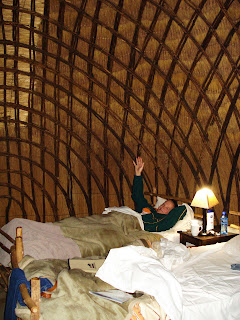 "Don't walk on you own. Keep cameras and wallet hidden." Gerhard  (Guts) cautioned us, saying he would stay with us all the time.
As we drove the main street of its capital Mbabane, the sound of music coming from a crowd on the roadside caught my ears. I asked Guts to stop so we could check out what looked like a music performance near the market. I can't go past a good street performance!
" I cannot leave the car, it may be broken into. If you go, I will stand by the car and you must stay in sight of me." Guts solemnly warned us.

Kay was rather worried but I was adamant I wanted to enjoy the music. I thought that by acting and walking confidently, we may be taken as visiting business South Africans rather than tourists; my Springbok Rugby top would be a rather cool disguise! I had been given this by our friend Guts, our driver. Moving purposely through to the front of the crowd of over 100 people, we witnessed a guy singing his heart out. African music particularly Zulu or Swazi style, has a terrific driving beat: it's infectious and inspiring with massed male voices backed with the higher accompanying female tones often singing many different rhythms woven together. This guy on the pavement was giving a commanding performance accompanied by two female back-up vocalists, and speakers pumping out pre-recorded instrumental soundtrack. I would presume he has gained his powerful voice and singing style in church gospel choirs. 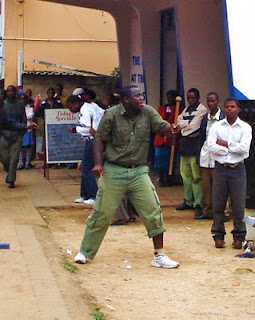 The crowd edged in. A few people jostled us. We couldn't tell whether that was threatening or just their wanting to get closer to the music. We were feeling uneasy so to break the tenseness I walked forward, motioned to the guy holding CDs obviously for sale, and asked how much.
"30 rand." Around $5.00. Not worth bargaining it down. Out came the few rand I had screwed up in my pocket.
As he handed me the CD a roar of what could only be approval came from the crowd! In an instant, what seemed like a threatening situation turned into welcoming and acceptance. Several slapped me on the back, someone shook my hand, and many gestured a wave of appreciation. My green and gold Springbok top was stroked and patted.
"Good colours." I heard someone say.
"First sale. Good man.''
Shiba the showman caught my eye, and while still singing gestured an appreciative wave. We were friends.

Hopefully I wasn't the only person to buy that day. $5 doesn't sound like much but in Swaziland it's the equivalent of 3 days average income for most.

Today, my CD of Shiba and Travellers is often playing in my workshop...along with all the other CDs I brought back from 4 Africa trips.


I wish I could find this guy on YouTube! Nothing posted.

To join in this week's Magnificent Monday-
1.Paste your name and a link to your Street Performers article in the Mr Linky tool below.
2.Leave a comment to show you care.
3.It's good etiquette to edit into your article a reference to this article to let your readers know also.
4. Visit each post and share Stumble, Digg, Tweet and Facebook etc so we can all benefit.

I´ve linked my street performers post, hope that´s ok. It has magic, a snake, backfilps and a tight rope in it.

I love the African street performers. Swaziland is such a beautiful country but you always have to be careful. I am glad you managed to change a potentially dangerous situation around by showing support for the local music. It is true that music can bring people together. Great post Jim!

Jim i love the street performers, you do see them much here in Utah but down in Yuma Arizona there are the mariachi band that play all over in stores and on the street they move along with the crowds, but the mimes up in San Francisco are the best i just love to watch them. there string trios and other performers do a quick change art plays. but like there you have to keep and eye on what is going around you, some of the performers are just what a pickpocket needs and i guess may be part of the performance. there was one that would work the crowd and then come to the front and would ask who a watch or hand bag belong to, done as entertainment. like your post and happy trails good bless

Have a great weekend!

Ah here is the second post about street performance before its nelieta and now its u jim .this time its Africa ..

Thanks for hosting, and also thanks for linking up at Exposure 99% hop, following back and i look forward being part of your blog.

i should have taken a more positive approach to street performers. i never saw them the way you see them. now, i regret not buying the CD from the group performing in one of the temple in Angkor Wat.

We always leave a gratuity these folks are working so hard to earn and entertain. Great Post Jim I stumbled and tweeted

I too enjoy street performers and ran into all kinds of them while in Europe this summer. From the classical musicians linked here to the high school band to metallic dancers, they were are all out there giving their all.

Hi Nelieta, yes travellers have to be careful in many places. Poverty driven theft is probably the worst that will happen. We probably felt safer there knowing the worst that would happen is a push and a pickpocket tries for a camera or wallet, but back home we would never walk our city main streets at night. Drug fuelled robberies are often very violent.

Thanks Roy, I always have time for street performances. I have so much I could write about! Mimes are incredible.

Hi Sheril, hope you have time to drop in a post on street life in India.

Hin Gladys, you possibly saw the same group we saw on that dirt track to one of the temples. Same thing happened there as happens so often...we stop and listen and show appreciation to the group of amputee musicians playing there. Then others stop and a crowd forms. Previously every tourist walked straight past.
Then I bought the CD they were offering for sale. Once I did, I noticed they sold a couple more.
So next time, do the same- break the ice and others will follow.

Thanks Jim. Always good to leave a few dollars. Streets just wouldn't be so colourful without them.

Jim, I don't have a street performer post but wanted to thank you for sharing this story. Loved how your gesture diffused the tension. I'm sure you were nervous.
Hopefully, I can participate next Monday.

Yeah thanks Inside Journeys, I guess we felt more apprehensive that we should have perhaps but our guide was very concerned about us and that triggered our concern. But the crowd reaction to my purchasing was fantastic. Lovely people.

Oh, this brought me back to Mbabane - must be 12 - 13 years ago. Such a friendly, lively place, at least back then.

Never thought about street performers in Africa but I am sure those are probably some of the best as well as most creative and unique that you will see.

Still the same Sophie. But the HIV epidemic is having huge effect there with up to 50% of 20-30 year olds affected, so one heck of a drain on the economy. Doesn't help to have a leader that spends so much on his lifestyle either.

I love them Jeremy. When you think the root of most popular music, reggae, soul, hip-hop, even jazz all stems from Africa. And Southern Africa has so many styles, a lot performed for free on streets like this. Best place for free entertainment has to be Cape Town's Waterfront with all the groups that perform live on the streets there.

Jim, this is a really nice article on street performers. I have a lot of future projects where I'll be showcasing SP but nothing right now :(

I met some very impressive characters who were street performers in Kenya. Great memories

When I see a good street performer, especially one with a unique talent, I always wonder who they are and what their life is like.

New follower from the Exposure 99 blog hop! Please follow back! Thanks! :)
Through the Eyes of a Tiger

When traveling it seems that the most magical experiences happen at places where others warn you not to go to.

I wish I could travel but since 2005 have been disabled and living off of diability. Can only afford the necessities now. Stopping by from the blog hop and now a new follower of your blog thru GFC and RSS Reader. I would love a follow back when you get the chance. Thanks so much and have a wonderful day!

Street performers amuse me and sadden me sometimes. Especially when it's young children, or in Kuala Lumpur people with disabilities singing for money. It makes me sad and I want to give all of them something. The ones here in Chiang Mai bring a smile to my face, especially the trios of boys singing English songs and they sound so good. Awesome post. That's cool that you buy the CD's so you have the memory with you. Good idea.

What a great experience. I'm glad you have the CD to remember it by :)