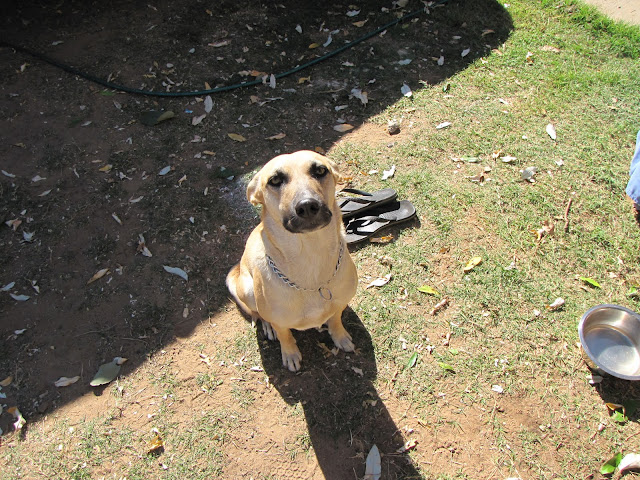 ﻿
Unspoken words...but so loudly communicated!
Total submissiveness; ears back, that imploring look in her eyes, totally fixed on me as she sits there silently, begging us to help. But it's more than that...she's placing her total trust in strangers... in the hope that we can help save her severely injured brother - her companion.
Not once did the injured dog snap even though in obvious pain and shock!
How did both dogs know to trust the humans who were intent on helping?
I had been on a game drive with Dr Clay Wilson, Honorary Veterinarian for Chobe National Park, Botswana (who also operates a private veterinary practice in Kasane) and his partner Laura in the park that afternoon. We had just spotted a pride of lions on a kill when the frantic call came in to Dr Clay. At one of the game lodges, as the driver of a pickup pulled to a stop, a dog had jumped off -  straight into the path of a passing vehicle! The distraught dog's owner was not sure if the vehicle had run right over the dog, or if it had taken the full impact from the front and bounced off.
We made it back to Clay and Laura's house where they have their clinic. In heavy shock the dog was failing fast and Clay rushed the dog in for emergency treatment. Whether the dog was paralysed or not couldn't be ascertained. He was in bad shape; whether he would respond or die Clay didn't know, so he decided the dog should stay in the clinic overnight and he would take appropriate steps in the morning. Painkillers and strapping his broken front leg made him a wee bit more comfortable. Later that night, we were thrilled to see him responding well. 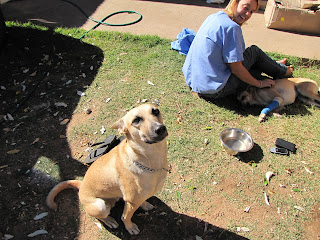 Alone, the dog's sister sat forlornly in the pickup until the owner who had stayed overnight with the injured dog, brought both dogs out together on the lawn to rest in the warmth of the morning sun. Now the bitch's eyes never leave me, boring into me - begging for help. Placing her trust in we strangers. They're beautiful dogs in Botswana. A good sized animal - a bit smaller than a retriever or Newfoundland but oh so finely featured! The dark muzzle and almost pencilled eyebrows giving their faces so much expression...and she was showing it, so intently. Does she know we were helping? Does she know strange humans actually care?
﻿﻿﻿
﻿ 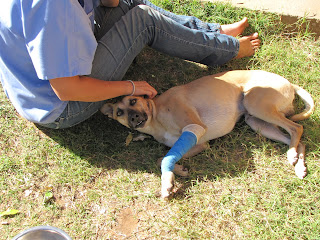 Dogs in Botswana don't have an easy life. All the dogs I have seen were skinny, often ribs showing or some were mangy - scouring the streets for any scrap. Most owners don't care if their dog gets sick or injured; often they are left to get over it themselves, or die. Cheaper to get another pup than to pay for treatment. Plenty of pups around as most dogs are not neutered or spayed. At Clay and Laura's, there's a pack of 7 dogs, two of their own and the rest were abandoned so they have had to take them in. What else can they do? Having treated them, do they just turn them lose on the street?
One young bitch found on the streets abandoned, was brought in for treatment. Her 'gift' in return to Clay and Laura was a wee puppy. What a surprise! Such a big rolly poly puppy from such a small mother! But cute as the puppy is, he's just adding to the cost of looking after the pack of 7 dogs! Thankfully there are some owners who do care for their dogs as the injured dog's owner did. The cost of treatment for a severely injured dog doesn't come cheap as any dog owner will know. Even in Kasane, drugs and equipment cost heaps.
And wait! There's more! Out in their back garden, Clay and Laura are looking after a baby zebra, and a baby sable antelope! Both mothers were killed by lions. Clay has to chose between looking after them or leaving them to the lions.
What choice would you make?
Zeby drinks heaps of milk. 3 or 4 large plastic coke bottles at a time, twice a day. The fast growing sable is doing its best to catch up also. I helped with their feeding.
﻿﻿﻿﻿﻿﻿﻿I was travelling with Russell Frankish of Greenbushpig Safaris, guide for Britz Rentals self drive 4WD, on a 13 day tour of Botswana from Johannesburg to Victoria Falls and return. But I jumped ship at Kasane, and rather than going on to Victoria Falls ( a place I have long wanted to get to ) I took the chance to meet up with Dr Clay Wilson of Chobe Wildlife Rescue. I've long supported his conservation of wildlife efforts in Chobe National Park by donations and publicity. There will be several posts coming up on my experiences with Clay, and his work. Game drive in Chobe by 4WD and along the river by boat. Now that is one  helluva way to see wildlife! Spot them drinking from well out on the river, cut the motor and float silently close to shore.
Chobe Wildlife Rescue needs donations! A charitable trust has been set up, Clay will announce trustees later, and plans for expansion of the Trust activities.

Meantime all these animals need to be fed and sheltered. While feeding the zebra, I resolved to make a donation on the spot to help feed Zeby and Saby.

So I presented Clay a donation of $400US and I suggested that the McIntosh family 'adopt' them!
Along with two baby elephants at David Sheldrick Trust, Kenya, a painted or African wild dog at Naankuse, Namibia, we now have a zebra and sable in our family worldly 'adoption program! Cool!

What do readers reckon? Want to help?

Donations can be made here-
Chobe Wildlife Rescue

And please spread/share this message through your network by hitting the 'Share' gadget below this line.

i wish i could do more the pray. hope the bother dog make it. very heart prayers i send to you and the animals thank you and god bless

Oh those doggy eyes really got to me, Jim. This is one of your most touching posts. Thank you for sharing. I'm going to share your post and spread the word about the wonderful work that your friends are doing.

Ah a great job by u guys !!well written Jim. U gave a perfect title for this post !! But Jim i m afraid of dogs a lot ..

This is a great cause Jim... but I cannot help financially speaking. I wish there are other means to show my support.

This is such a heartwarming story Jim and the photo just makes you melt. Thank you for giving us the story behind these pictures...all life deserves a chance...especailly our animal kingdom...and you are right..they do look to us...( I shared...)

Animals are sometimes an after thought as the people tragedy on the ground takes the forefront often you can tell how a society is doing by looking at the animals they care for.

Hi Roy, we can all help in other ways by sharing this post and publicising the work Clay and Laura are doing! Thanks.

Thanks Corinne. You have a great heart! Thanks for sharing this post.

Thanks Ravenmyth, thanks for sharing. I have a lot of time for animals. Just been over to Namibia on an elephant conservation project I'll blog about shortly.

Hi TurnRich. You'd like to think so. But then even in our most affluent societies, animals are treated badly at times.

The love these people have is amazing! Huge hearts! Is the dog okay?

I have an absolute love for animals..in fact I love them more then people..they love you back unconditionally..but at the same time I think of all the people out there hurting too...knowing where I came from I think of the little girls hurting right now with no one to save them...As always...XOXOXO

Hi Russell, Thanks and I'll email you.

Hi Bonnie, Yes I know what you mean. And it's often the case that those who have had great hurts in early life grow up with a great love of animals.
And the internet and blogsites is a growing medium for spreading that awareness in protecting children...hopefully.

My first visit to your blog Jim and what a heart warming story. I know dogs are so expressive. She reminded me so much of the mongrels here in India. They have beautiful dark expressive eyes. Just saw your comment that her brother is getting better. The situation with dogs here are the same in Botswana. Even thought they are shelters for them financial help is not easy and most of them are very unhygienic. Looking forward to more posts about your experience with Clay.

I probably would have adopted the zebra and sable too if I met them. So cute! And, those dogs... they've got the eyes of a labrador with more expressive mouths and noses, I think. LOVE the first picture. She is definitely pleading with you.

Moving touching post!! I certainly admire your compassion for the animal kingdom and can't fault you for expanding your stable. Dogs look precious, hope they're both doing well. I'm jealous of your African journey, keep the posts coming!! :)

Mike the dogs is doing very well and healing. Thank you for all your nice words
Dt Clay

Hi Rachel, yes that first pic really says it all. She didn't know me but just pplaced her gaze on me and was trying her hardest to implore me for help.

Hi David, I 've been across to your site. No better memorial to a great companion than your site!

Hey Jim, fantastic post ...again! The animals have such an amazing champion in you, and their world comes alive for us armchair travellers through your words and emotions. wonderful to hear that the dog is fine and recovering and the dogs are reunited and hopefully have many years of companionship together...keep up the good work..and the excellent prose! cheers, Michael

Jim - I forgot to ask you yesterday - does Clay do guided tours of Chobe?

Hi Michael. Thanks for your encouragement. If you want guided tours in Chobe you have to go with a licensed guide, and Dr Clay can arrange them for you. Just let him know and he will arrange for a guide to take you in and give you the time of your life.