The Hammerkop's nest reveals a surprise!.

﻿﻿
﻿﻿ Africa has a huge range of unique native birdlife and is host to many migratory birds from other continents as the seasons change: a birder's paradise!
Around ponds and streams in Africa, one of the most interesting birds to observe is the Hammerkop ( Scopus umbretta ). Crazy looking, but full of character! This darkish brown bird of around 20 inches size is easily recognised by its distinctive large curved bill, and crest at the back of the head creating its hammerhead shape. A compulsive builder of nests of immense size, sometimes creating 3 or more a year even if not breeding. Barn owls may often force them out and takeover the nest, so it probably helps to have an extra home to fly off to. So the hammerkop fulfils a valuable role in the environment industrially building nests that other birds may eventually occupy. 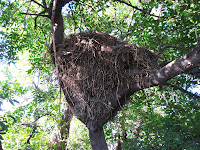 On my Chobe National Park, Botswana, exploration last May with Honorary Game Warden, Dr Clay Wilson, of Chobe Wildlife Rescue, we were lucky enough to discover a large untidy clump in a tree fork and thought it to be a hammerkop nest. As we approached, an owl we didn't have time to identify flew out. Had the hammerkop been evicted and owls taken over? This required investigation. 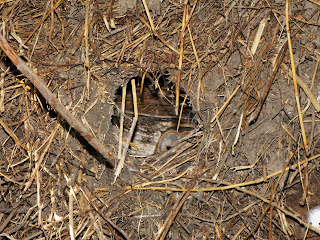 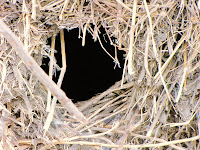 We each photographed the nest trying to get a peek inside. But while the exterior was captured, each time we were unable to see into the depth of the black hole nest opening. As we were about to leave, I tried a one last time using forced flash, hoping to get the inside of the hole illuminated. It worked! The interior was flooded with light and an eye was seen peeking out at  us. We were both excited to see the revelation! Out of focus though, so the question was - how to get the fledgling owl inside into sharper focus, since the camera couldn't focus on anything in the dark interior?
﻿﻿﻿
﻿﻿﻿

My cunning brain figured that if I focused on the main upright branch, which I judged to be the same distance from me as was the young owl in the nest, then swung the camera to the opening, a flash photo should come out with the subject illuminated and in true focus.
That did the trick and not just one, but 2 birds were revealed peeking out at we pesky intruders! Another shot using the same pre- focus attempt revealed more of their plumage markings. 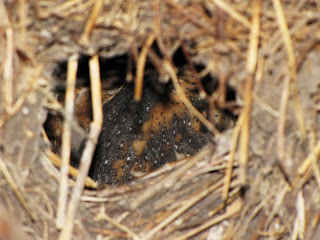 Yeah, well good photographers would have known how to do that, but hey, I'm just learning. Point and shoot auto jobs are what I know. This photography with a new camera as a serious hobby I need to learn more about!

Later our travelling companions Fred and Liz identified these as Barn Owls .  Fred is a keen birder and has a wealth of knowledge of birds which we tapped into constantly as we travelled Botswana. We saw so many. Thanks Fred!

The Hammerkop's nest reveals a surprise!.

Well Jim, no matter what you say about your photography prowess, I still say those fiery sunsets in the last post were stunning!
Cool story of the barn owls in the hammer kop nest too. They’re just so cute!

Happy to watch and learn with your photography - I'm still an instant/point/click girl myself!!

Isn't nature grand... I love how it all works together a great master plan that only get screwed up by humans trying to help it!!! hey Jim great photographer's fix it!!!!Going to be enjoying your post from your trip!!!

What a wonderful surprise to capture on film. If it hadn't been for your photography prowess you won't have none what was hiding in that nest - and you wouldn't have been able to share its secret with us.

Great post. Wonderful photography! so glad to be part of the coming blog tour and discover people like you. So thrilled! I am following you now.