Memories of Coffee in Ethiopia.

The smell of fresh coffee wafts into my nostrils: they flare sympathetically in response, drawing deeply on that comforting aroma, reviving Ethiopia memories with each intake. As we cut through the shopping mall car park, Davies' Coffee trailer has a quartet of waiting customers this early morning. I won't succumb to the temptation, as there will be more of that delicious aroma percolating through the pedestrian railway underpass, from the coffee hole-in-the-wall on the Paraparaumu railway platform. Waiting commuters clutch their discardable cups, fortifying themselves for the hour long trip to their cubicles- if there isn't another delay or breakdown on the lines. On those mornings, I just manage to avoid sarcastic grins at the hundreds of frustrated commuters as we wander past them on our 20 minute walk to my workshop. Thank goodness I don't have to join the throng of commuters. Dragging my dog Lilly's nose out of the bush where she's been exploring doggie smells, we head on over to my workshop where I can make my own special percolator brew. Almost looks as good as Davie's. But better, much better as it's made from coffee we brought home from Ethiopia.

Machiato- Ethiopia Coffee
Coffee these days, brings back memories of our time in  Ethiopia, the primary home of the coffee plant, , Coffee Arabica , from where it spread to Yemen then throughout cultures around the world. Little wonder the Italians had to invade Ethiopia- some people would die for a great coffee! After they got kicked out, their parting legacy was found in an aromatic concoction called Machiato- fresh roasted, ground and brewed in front of you, served in a small glass or cup with hot milk floated on top. Fantastic. But order a double shot - one small glass is just not enough. You can afford it- a serving may cost you 40cents US. 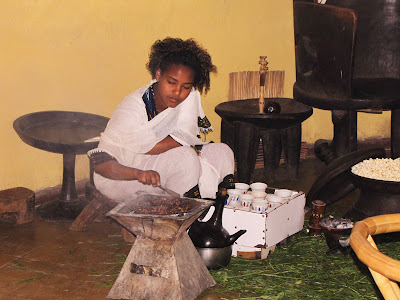 Walk into most restaurants in Ethiopia and near the entrance will be a woman tending to a brazier, roasting and brewing to each patron's order. She stokes the fire with charcoal, gently coaxing a not too fierce glow rather than flames, the beans resting in a pan so she can shake them constantly, ensuring the beans on the hot plate are gently roasted and not burned. Here is the secret to serving coffee that has a depth of rich, almost chocolaty taste, an aromatic nose, a sense of freshness, and retaining just enough sweetness to need no added sugar. Meals are all the more pleasurable, as she may walk around the restaurant with the roasted beans, so the smell fills the restaurant, titillating your sensory membranes with its promise of gratification to come. Being prepared to your order, no additives, beans picked, dried then roasted and served within days, lends added enjoyment from its freshness, you may never find back home.


Ploughshare Women's Skill Centre.
We had breakfasted early, and were on the road by 8am heading towards Gondar, ancient capital, and home of romantic castles and palaces. But first a stop at the Women's Ploughshare Trust project. This is a live-in training organisation funded by Government, and donations, to train women in skills they can use to earn a living in their villages. 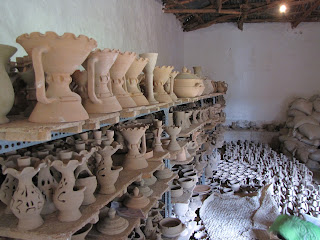 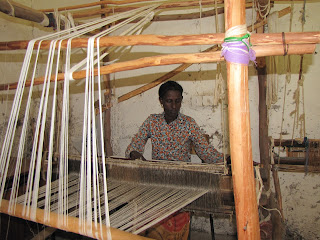 About 65 women, mostly solo mums, who may have lost their husbands through AIDS, live there and are being trained in basic crafts such as pottery, weaving, sewing and animal husbandry. Apart from basic home making experience, women generally do not have the skills to be able to earn an income. In many countries, women who lose a husband are marginalised, even ostracised, because along with the death of their husband goes their means of living. Often prevented from gainful employ, by tradition, cultural mores or merely lacking in skills, widows may be reduced to a life of begging, or prostitution. At Ploughshare, as they become proficient in new skills, they will return to their village and in turn train others, thereby sowing the seeds of micro-business for others in their communities.

I thought it a very effective way of making a difference at the grassroots level where assistance is most needed.
Here we were to be able to observe a very targeted way of contributing to getting people out of the poverty trap, by training them in crafts necessary at local village level. And by creating a network of small training groups throughout the country, as another mother takes her newly acquired skills back to her village, and forms a group to train others.
After being shown the various sewing, weaving and pottery studios, we were treated to a full coffee ceremony in the meeting building. Traditionally, coffee or bunna (boo-na) service is a ceremony as much to honour you as a guest, as it is to serve it at its best to bring out the maximum aroma and flavour. The meeting room was thatched roof, with sticks herringbone patterned around the sides, but very airy and cool. Once again the coffee beans were roasted carefully, and ground in a wooden mortar ( mukecha)  using a heavy metal pestle, then steeped in a pottery coffee jug called a jebena. We were served in small china cups. 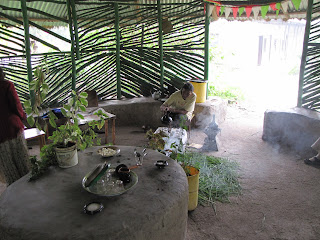 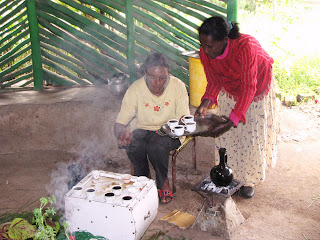 It was while waiting for coffee to be served, I was able to watch the birth of a calf, by the lone cow Ploughshare had separated from the herd. It struck me as symbolic of what Ploughshare stood for- new life for these women.
﻿﻿﻿

All photos by Jim McIntosh

Labels: Ethiopia.
Email ThisBlogThis!Share to TwitterShare to FacebookShare to Pinterest

amazing women and a wonderful brew :-)

what wonderful memories to have whilst enjoying a cuppa!

Coffee culture at its best and a good deed done too.

Now this is one trip I would have enjoyed...Mmmm coffeeeee!

Very interesting post and insight into the Ethiopian culture. I'm glad there are organizations out there working but there is still so much more work to be done, lots of education needed.

Very nic post and photos. I'd love to have this same experience, enjoying the culture of Ethiopia and drinking that wonderful coffee!

On my last bag now Cathy. But seeing the work Ploughshare are doing with disadvantaged women was very inspiring.

A great post! You got me with the coffee and then I was astounded by the story of Ploughshare in Ethiopia. Thanks.

Jim, I’ll have a double-shot of the Macchiato. My mouth is watering from all these olfactory descriptions of rich coffees.
Blessings to Ploughshares for helping these women out of the poverty trap. I’ll bet those hand woven scarves are lovely and much appreciated by your recipients. I know I'd be grateful for one.
Thanks for sharing your travels with us.

Dare I admit this? The smell of coffee makes me turn a very unattractive shade of green. But I loved reading about your experiences in Ethiopia and these programs that seem to be flourishing. I imagine the textiles they create are beautifully made, so I'll visit the link you provided and I'll avoid all noxious coffee aromas as a result! I know, I know...you're shaking your head in dismay. It's weird, not liking coffee. I do drink tea though! ;-)

I truly enjoy your work, Jim.

John, glad I got you with the coffee descriptions. What do you reckon of returning to NZ with 4 bags...and forgetting to declare them?
Debra yes it was good to see how Ploughshares are giving new hope to women there. They are making a small difference in a very poor country.

Dawn, sorry to hear you don't like coffee. But like you I enjoy tea also. In fact coffee I limit to morning and luch, but from then on it's tea, and often green or herbal teas the rest of the day.

Being a woman, I am thankful to have been born in the US. I bow my head when I read stories of women in other countries and how they are treated. The coffee blends sound wonderful though, as I am drinking a simple 'breakfast blend'.

Hi Norazam, no, haven't tried Brazilian. They're probably growing the same Arabica type there so I guess what you savour will depend on the defferent way of treating the beans and how it is served to give it a special destination style.

Hi Mary, it was in India where we began to take more interest in what was being done to improve their life. There and in other countries there are similar projects, training women in skills to get them out of prostituion. They are projects we look for and are only too pleased to buy or donate to.

Very interesting, Jim. Next time I have a chance I'll buy some coffee from Ethiopia. I always see the African roasts at the good coffee shops in Melbourne but never really new what to expect from them taste-wise.

Give them a try Andrea. But have a close look at the source or production info. A lot of the coffee coming out of Ethiopia for instance will be grown , and harvested from small organically grown village co-operatives, rather than huge plantations which may have artificial fetilizers and sprays. And also Fair trade suppliers which do try and give a better price back to local growers at village level.

Wow. What a memory to go with your cup of joe. Stories like this add destinations to my list of places to go. :)

Rhyme Me a Smile

Put it up top of your list. With uncertainty now in Egypt, I can assure you, there are places and monuments in Ethiopia that will rival Egypts as an alternative.

Nice post - always a good thing to connect a product with its backstory and the people who depend on it.

Yes Robin, you could write a novel on coffee backstory. Amazing how so many countries have developed their own preferences for serving it up.

Very cool experience! I love grass roots efforts like these and how nice that you get good coffee out of it as well!

star-buck nah!,ethiopia a real cup of Joe!, now that's coffee, Jim i hope you tip them well, excellent of fortitude the will to build a new life, my heart go out them and for bring this store to life.

Wonderful story Jim. I'm always on the lookout for charities that are doing good work when I travel and this sounds like a good one.

If you ever get over to Ethiopia Barbara, it is placed just out of Gondar, and the video link will give an address to contact them. Peraonally, I feel Ethiopia is set to become a 'hot' travel destination as the sights, culture, and history rival Egypt, and in fact their history is very much intertwined.

What a fantastic story. I need to add Ethiopia to the must-see list!