A precious photo given to us  in Mongolia. Today is Friday, so for the  photo to link in with  Budget Travellers Sandbox Travel Thursday  I post on Friday.
. 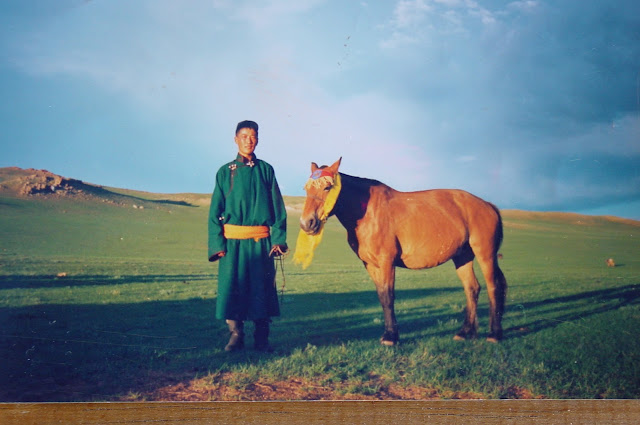 Hure' (pronounced Kurey, the written H is a hard K. ) is proudly pictured with his most prized possession, his horse. This is a photocopy of an old film photo but even so, the colours are rich and in good contrast. In 2006 we travelled to Mongolia, staying with Mongolian hosts as part of a Friendship Force exchange. (More on Friendship Force coming, otherwise check out that link.) We were taken out onto the vast plains near Har Horin (Kharhkhorin) and our group drove up to nomadic herders ger tents, and our hosts would then introduce us and leave us to stay overnight with the various families. No previous arrangements had been made, it just got sorted there and then, rather late in the day. It was after dark by the time the last of our 25 strong group were being foisted upon an unsuspecting family in an adjacent valley.
I'll blog about the wonderful experience later, but the host family's hospitality, genuine warmth and welcoming, and willingness to put themselves out to accommodate presumptuous, unannounced , wealthy Western guests was etched in our minds forever. This family touched us deeply. We had taken a few modest gifts for the children- school supplies, as we were aware of the obligation you placed upon a Mongolian if you present them with a gift. You have created an obligation for them to respond. For a nomadic herder, who has scant possessions, apart from those for their family's daily survival, you create a huge impost, unwittingly.
What can they give in return?
Hure', the male head of our family had nothing. But just as we were leaving, he presented us with an envelope. The above photo was enclosed. When we opened it, we recognised this as a photo taken on his wedding day, perhaps his only photo of that time. He had given us perhaps one of his most prized possessions. Not wanting to offend we accepted, but we made sure we got their post office box address in their local main town. Nomads will have one where any mail can be uplifted occasionally, as they relocate 3 times a year.
Upon our return we sent the family a photo album of all the digital photos we had taken of  the family, and the extended family who crowded into the ger that night. We included several copies of Hure' and his horse with blown up pics. Hure's gift to us is precious as it is an original. Hopefully Hure' now has several copies in return.
How could we deprive Hure' of something he prized so much?

What a wonderful gesture! I am sure they will treasure the photo album!

Great shot Jim, and a beautiful story. Thanks so much for posting to TPThursday!

I always enjoy reading your posts, very thoughtful what you and your wife did for Hure'

Thanks ladies. It is difficult, when our natural inclination is to give your host a present for an impromptu overnight stay, but that places your host in under an obligation to repay your gift. Even though their gift is their taking us in for the night.But their hospitality doesn't consider that a gift- it's just what they do.
So we gave gifts to the children. That is supposed to be OK as you haven't actually given anything to the parents.
In this case though, Hure' still felt obliged.
So his family now has a whole heap of photos, and if we're ever passing again, we'll go and accept another gift from him!

Hure'<<<Thank goodness you taught me how to pronounce that or else I'd be reading it differently. Never a vintage photo but its simplicity is a beauty. Nice story too.:)

Thanks for sharing Jim.

Jim, you have a heart of gold. This is a precious photo of Hure and his horse. How blessed they must have been to have received the gifts of gratitude from you. I believe they were received. Thank you for this heartwarming story.

A truly amazing people and a goes the same for the photo. Thanks for sharing.

I'm glad you all appreciate how unique that photo is.Up until the recent intro of digital cameras, photos were very rare possessions of nomadic herder families there. To give us that, which was so little for us, but was so precious for him, he was probably giving us a prized possession.

A beatiful story. Gift-giving is so complicated.

I just found your blog, and your photos are absolutely gorgeous!

When we moved, I had to find homes for all my horses (had 17). This picture really made me miss all the moments I had spent with each one over the last 15 yrs. Tear-drops"',

A beautiful post. I find it touching how hospitial other cultures are towards travelers. It's too bad, here in America, it's not that way at all.
I loved the photo too :)