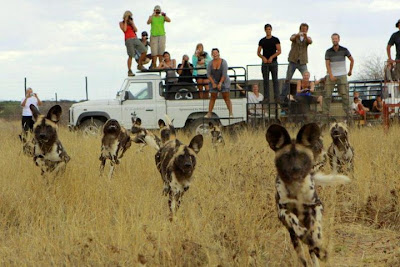 Have you ever seen so many happy dogs?!


Africa's Painted Dog, Lycaon pictus also called African Wild Dogs are critically endangered. Numbers are so low in some countries, or now non-existent, and urgent conservation action has to be taken, and is by several organisations.
Back in July I wrote about our family's rescue mutt Lilly, and how we had also ' adopted' a Wild Dog pup  My family's new dog.  at  Naankuse   a wildlife rescue and  rehabilitation centre in Namibia, where our family had volunteered in 2009. Naankuse in June  had just taken in 14  young pups from a den on farmland in the  Maketti strip where they would face persecution, and adopting pups was one way of raising funds for their keep. 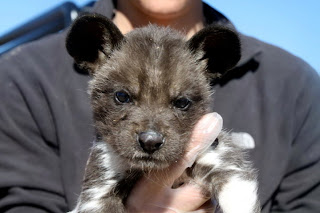 As a volunteer project I wholeheartedly endorse Naankuse for their efforts in wildlife conservation, and in the support by way of health, employment and housing for several San Bushman families, and education for their children. We have been following progress with the raising of these 14 pups since they were first taken in by Naankuse. As Namibia's Wild Dog population is estimated to be less than 200, taking 14 pups in, may prove their best chance for survival, and for establishing a breeding program. Now let's get this straight, Naankuse do not breed wildlife in captivity. All cats there, lions, cheetah, leopard, caracal are rescued and rehabilitated back into wild areas away from population centres or farms, or if that cannot be achieved, then they are given huge enclosures to live out their lives. It certainly is not set up to be a petting zoo. But you can view the retained animals.

With these wild dogs, there is a chance a successful breed and release program could be started as a first stage in arresting the decline of this magnificent animal. Volunteers celebrated the transfer of the pack into their newly erected large enclosure. But first they had to be lured into cages for transport to the enclosure and then released. 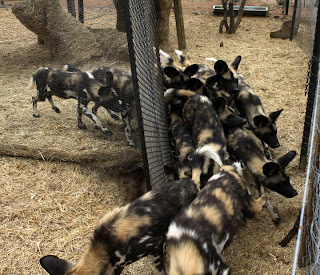 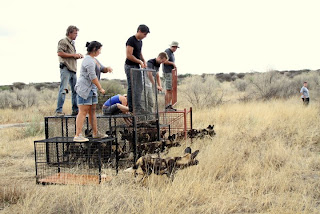 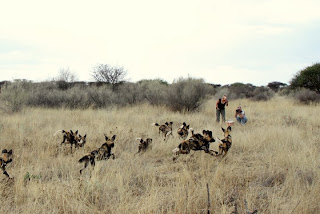 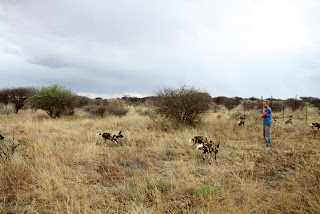 So far a job well done. There were once approximately 500,000 African Wild Dogs in 39 countries,  now  there are only about 3,000-5,500 in perhaps only 14 countries. Requiring huge areas of land to range over, most African parks are too small for them, and they will roam into human areas, often being killed by farmers protecting their stock.

I'm a fan of these wonderful Painted dogs  as we have one ourselves. Just a shelter rescue mutt, but she's my friend each day at work where we trot off together each day. She'll howl along to Dolly Parton or Emmylou Harris yodelling , and bark to let me know if clients approach.
Spot the difference- 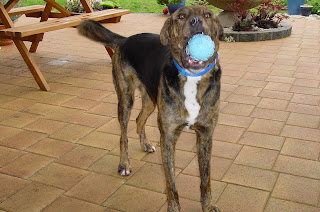 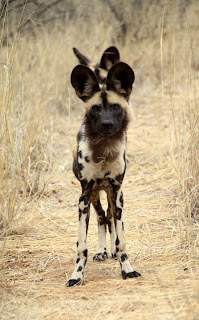 They have a wild, unusual beauty - what are they like in temperament? Is it possible to 'tame' them? And if so, is it desirable?!?!

Awesome post Jim. Thanks for highlighting the great work being done to help these beautiful dogs. Craig and I will never forget our wild encounter with them at Kruger NP. They were chasing down baboons for dinner and would roll around in and eat their own poop to disguise their smell.

I'm not aware of any mature wild dogs as pets Red. Sure as pups being hand reared they'll be much like another dog, but I think their natural caution around humans will grow with them. There were two brothers at Naankuse while we were there, and although not aggressive would not approach us.
And yeah, they do have a wild unusual beauty about them.

Matt ,I reckon the first photo says it all. Look at the joy in their faces and the way they're all running out to explore their new territory.
My dog smiles when super happy, and there's one there with head back and all teeth showing...pure doggy happy!

There's coming a day Christy when much of Africa's wildlife you'll only see in sanctuaries or zoos.. May have to pin my Lilly's ears up, trim them round and breed her.LOL.

Oh that little pup looks like he could do no harm even if he tried! Thanks for highlgihting the project Jim.