The effects of the Christchurch Earthquake.

A 7.1 magnitude earthquake struck Christchurch , New Zealand  at 4.35AM, Sept. 4th this year. Our hometown was lucky to escape such a large shake with no loss of life, and relatively few casualties. This has been a traumatic event, and we have been keenly interested as we have many family and friends living in our South Island's largest city. It is hard for us to truly understand the full effects the quake had upon people at the time, and more so the after effects as aftershocks keep rocking the city. The stress of living with daily tremors  must be debilitating for many.  It has not been surprising for us to hear friends have been prescribed motion sickness pills as many minor shakes have been recorded daily.
I've never written about my home city's quake, as I believe it's not my story to tell. The story rightfully belongs to those who experienced it. The following story is from a Christchurch friend who experienced the horror. We'll call  him ''Grumpy"
....he's probably got every right to be.


In the same way that so many remember what they were doing on November 22 1963, (Dallas Texas) or August 31 1997 (Paris tunnel) the people of Christchurch will always remember what the were doing in the early hours of September the 4th 2010! If we had had the extra few days on the Sunshine Coast then this would not be indelibly etched on my memory.

Suddenly I realised I was awake. I wanted to be asleep but something was happening. There was a scream. It was my wife. There is the sudden realisation that we are experiencing an earthquake. The noise was horrifying! Something like a cross between a Boeing taking off and a London tube rushing from the tunnel to the platform!

Later you are told it lasted around 30 seconds. However at the time everything is in slow motion. I guess that’s the adrenalin.

Some how we manage to remember “door frame” and we are holding each other in a door frame. Walking anywhere is impossible; it feels like extreme turbulence or a rough crossing on Cook Strait. The dog is a bit bemused by all of this, but he picks up on our anxiety and has a good bark. While that may work for him it doesn’t do a lot for us, but when we grab his collar he decides it’s no longer his problem and he settles down. I wish someone would grab my collar.

The house continues to heave in a sort of cork screw motion. I thought, “So this is the big one!” We were very conscious that it is getting a lot stronger. 30 seconds can be an incredibly long time.

We had felt absolute terror! I can’t say I have ever experienced it before and I never want to feel it again.

I expected the house to collapse, but it didn’t. The power has now gone off. When it all settles down I tell my wife I’m going to get the torch. I’m told to put shoes on and I remark, “It’s no time to worry about what I’m wearing.” I feel a bit stupid when I’m reminded that our pictures may be off the walls and the floor strewn with glass. Shoes on, I go and get the rechargeable torch from the bracket and with enormous relief find that was where it was supposed to be and it worked.

There is aftershock after aftershock so we decide to get in our 4X4 outside. In a very short time we have grabbed medication, hearing aids, and mobile phones. We must be really old! We even manage to grab camping gear and throw it in the back of the truck. None of our friends believe we were capable of all of this. When I reflect on back, I am staggered that we were that organised and calm.

The truck hadn’t been started in a month so getting behind the wheel I hoped the battery was not flat. It seemed to take for ever to start. Apparently that’s just how diesels work. Once it coughed into life we just moved to the middle of the road, away from any possible falling debris. The shocks after the main jolt are called aftershocks. This implies they are minor. We had a series of ‘5’s”. A 5 is a significant shake. It is very noisy. The family car was rocked a meter down the gentle slope of our drive. We were sitting in the road watching everything move. Again it was in slow motion. The neighbours were coming out now and one group, worried about Tsunami leapt in their car and headed for the hills and the quake epicentre.

At least the truck radio worked. Very quickly details were available. We sat there desperately trying to get family on the mobiles. Remarkably they were still working. Unfortunately with the power off, cordless phones didn’t work at the other end, and others were inconsiderate enough not to have their phone turned on in the middle of the night. It seemed highly likely that this was the sort of event that killed people. As we finally tracked everyone down we had an immense feeling of relief.

Just like in the movies the day dawned and we moved into a period of calm. We could check everything and take stock of it all. We were lucky, a few things had broken but there was no visible damage to our house. We would be back to normal quickly, put this behind us and a laugh about it all. Unfortunately, this wasn’t a movie and it would not be quite as simple as that. 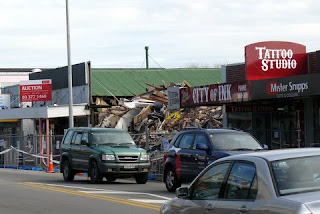 Just one of many buildings damaged or collapsed.
http://www.geonet.org.recent%20quakes/

I've asked Grumpy to supply a follow up article , based upon living with the after effects. How do people go about rebuilding their lives, homes and businesses ?

The effects of the Christchurch Earthquake.

It is two months today since the quake, and even this morning we were woken by two fairly good tremors. Two months later and it is all people talk about, think about! Only a few weeks ago I had friends still sleeping under their dining table. How more was not damaged I can't understand. There are people very stressed by the event, and it is hard to block it from your thoughts. My own reactions from the quake (I was in the UK for the main jolt) you can also read at: http://thefrenchway.wordpress.com/2010/09/06/earthquake-shakes-my-emotions/

Thanks John for your thoughts of the quake and I'll certainly be reading your observations. We've always been expecting 'The Big One ' up here on the Kapiti Coast , and live with fairly frequent shakes, so there's a lot we all stand to learn from this event.

Thanks for posting this. One reads about floods and earthquakes but never really can understand what it's like to be surprised by such a desaster of nature until one reads a first hand account.

Very true Inka , and the ongoing effects on people's lives can be just as traumatic. Some parts of Christchurch suffered liquefaction of the ground, and exhaustive tests are being carried out to see whether people can rebuild.Many have been told they cannot. It must be heartbreaking and stresful being in that situation.

Great to read about your personal experience. It must have been terrifying. I remember the Newcastle Earthquake in 1889. We lived about 1.5 hours away and felt the tremors. I slid across my loungeroom floor and my mum screamed to get under the door frame. Time certainly stretched for me then as well. It would not have been anywhere near as bad as what you felt. Many people died in Newcastle, I can't believe how few casualties you had there.