Elephants are being massacred in many parts of Africa, at an alarming rate, fuelled by rising affluence in China and the rising demand for ivory.  Incredible to think that we will wipe out a species just so we can make some trinket out of their teeth. As travellers, think about it before buying another souvenir that might just look great hanging around your neck or adorning your wall. What great animal died to provide it?

Elephants are a special interest for me. I have been up close to them unexpectedly, Moonlight Nightmare  and in Kruger Park and was fascinated by their gentle nature as long as you gave them space and heeded their warning signs. Our largest land animal has an intricate social  behaviour and displays a very high intelligence. Their interaction with their environment is essential for the well being of other species, by digging seep holes for water, by keeping the savanna open, making pathways that help serve as firebreaks, and also dispersing seeds. Our world will be poorer should they disappear.


My experience with desert elephants while at  EHRA in Namibia fuelled an interest in Mali and Chads desert adapted elephants. And I have been following news of Stephanie Vergniault's work combating poaching in Chad -
The unseen elephant wars in Chad 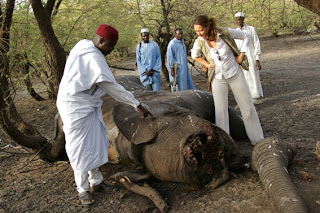 Stephanie Vergniault inspects a recent killing.
﻿
﻿Central Africa is one of the last regions with a sizable population of African elephant, but their numbers are only a fraction of what they used to be. In Zakouma National Park in Chad there are an estimated 600 elephants. Twenty years ago there were 40,000. saving-elephants-in-chad
20 years........! 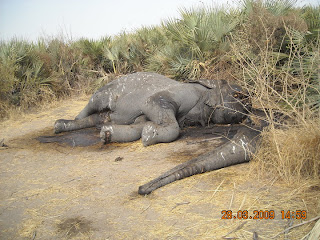 Today , I have received this brief on a newly founded  website  that I now wholeheartedly support.
soselephants.org

A small donation can be easily made at their website by Paypal.

SOS Elephants was founded in 2009 by Stephanie Vergniault after she realized the dire situation the elephants of Chad were facing. The poaching of elephants for their ivory was on the rise, while global awareness of the problem was down. SOS Elephants hopes to change that. SOS Elephants’ mission is to be dedicated to the preservation of elephants and their habitats throughout various African regions by employing methods in research, education, conservation and counter poaching disciplines. Specifically we strive to:


• Make the global communities aware of the fight for the survival of the African Elephant.

• Educate local communities and global communities alike about the important role the African elephant plays in the environment and the ecosystems we depend on.

• Work with and support local communities in ecotourism, something that elephants have a major role in.

• Contribute to the conservation of the African elephant and their habitats through conservation and education by promoting sustainable communities and livelihoods.

• Provide a safe house for elephants that have been orphaned by the hands of poachers, in hopes that one day they can be released back into their wild environments

A small donation can be easily made at their website by Paypal -
http://www.soselephants.org/index.html 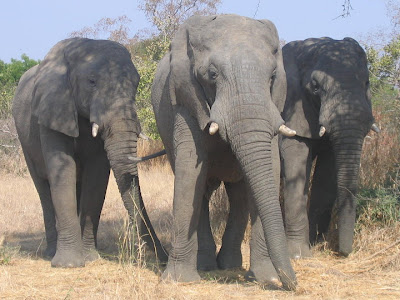 Thanks. We need you!﻿

Jim..Oh my gosh. I just stumbled upon your blog and am so happy to have done so. Africa was my very first holiday and elephants are my favorite animal in the world. Thank you for sharing the plight. And for sharing your photos. Although disturbing to see, thank you for being so honest.

Jim, this is sad to see. Thanks for making us more aware of this travesty.

Hi Debra, really nice to know you're reading my blog. And I've decided that these issues are the topics I wish to write about because Africa does have wonderful wildlife and it's so sad to see what's happening there now that poaching of elephants and rhino is escalating.
I've been across to your blog reading with interest lso.

This is tragic, I never realised this was still going on to this extent, for there to be such a drop in numbers in 20 years is almost unbeleivable, thank you for sharing and making us aware.

This breaks my heart. Elephants are my favourite animals. I fell so deeply in love with them after spending time watching and learning from them in Africa. I have a couple of posts coming up about them.
Did you make it to Addo Elephant Park in South Africa Jim? Incredible.
I hope that something can be done to stop this and thank you for working for such a great cause.

Hi Kevin, and I found it unbelievable also.And those numbers are sadly dropping while in South Africa , good wildlife anagement in their National Parks mean elephant numbers are getting too high for the areas they are enclosed in.So culling of elephants there is seriously being considered! Would you believe that?"
http://www.sanparks.org/forums/viewtopic.php?f=73&t=13981&start=1215&hilit=elephant+culling

My sanparks forum post hasn't shown up as a link so I have edited in an elephant culling issue link right at the base of the original post Kevin.

Sanparks forum is one of the greatest resources around on the web for all things South Africa National parks and the members are wonderful and the info on that forum incredibly diverse and in depth.

Hiya Caz,
No sadly never been to Addo.Heard so much about it and over on Gap Adventures forum,
http://wateringhole.gapadventures.com
Juscz and I had a lot to do with having a visit to Addo incorporated into Gap Adventures trips through that area.He raved over it.
I'm glad you've been touched by the elephants spirit Caz and when are you blogging on them?

Gosh, this is really tragic to know it is still happening. I just hope that it comes to an end soon. There are not much of these beautiful beasts left in the world. Even here in Southeast Asia, many of the endangered species are being poached daily....

You're right David, rhino, tiger ,even pangolins are being ilegally killed. As travellers we can do so much good in highlighting these issues.

This is so sad. I just watch a documentary about elephants and they were showing how they have a funeral ritual they do an mourn their dead. Just so sad that we can't wake up as a people and stop killing for greed or for any reason. humans just have a need to take over and control everything.

Hi Deanne, so true and there is a video I'll post a link to, that shows how a mother elephant sensitively having to cope with the death of her baby.
I've been reading your site with interest also. You write so well.

Thank you..that means so much to me. Unfortunately I get my juices flowing at night so there may be typo's and grammatical errors. I just want to help people to wake up. most of us are all sleep walking our way through life. I look forward to the video. Do you have a FB page so the post will show on our home page? I am going to add you on my favorite blog list on my page if that is ok...let me know?

You'll find me on FB as Jim McIntosh.

I was disappointed with how elephants have been treated in Thailand. While not killed per se, they are paraded around in costumes and do circus-like tricks. It's sad. In South Africa, Rhino Poachers have become even more aggressive in recent months.

They certainly have Ben, and rhino poaching is a subject I'll touch on shortly.
As to Asian elephants, there's a huge debate about whether the very fact of them 'working' as performers may in fact be protecting them.
I mean, if there are not enough wild areas left, and animal rights groups want to see them stop working, then why would anyone go to the expense of keeping them?

Wow, it is really heartbreaking to see this happening. While reading and looking at those pictures I literally took a deep breath. I was shocked. Those pictures are really strong, but people need to see them as they deliver the message clearly.

Shocking all right. I felt the same way when I saw them. So that's why I feel that we travel bloggers can deliver the message as well as inspire people to travel. And if we don't spread the message, all that wonderful African wildlife that so many of us travel to see may not be there.

I am so depressed when I read things like this. Elephants are so interesting and we can produce imitation ivory so easily.