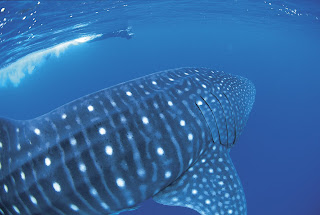 15 metres of whale shark!
What fantastic creatures.So gentle, so huge, so perfectly shaped for their ecological niche as cruising plankton feeders.Swimming along with these must be one of the great undersea adventures.And you can do this at Ningaloo Reef, Western Australia.Take your pick from any of the companies here .
Whale sharks are actually fish and not whales. Not only that but they are the biggest fish in the world and a fully grown whale shark can be as long as 15 metres in length and weigh 20 tonnes.They may be huge,but they are also a very gentle fish. And don't worry, they won't eat you as they  only eat small fish and plankton. That is why people from all over the world travel to Ningaloo Reef at Coral Bay  to swim with the whale sharks. Studies reveal that this shark prefers warm waters, with surface temperature around 21-30º C, marked by high primary productivity (much plankton).Which will explain it being seen around coral reefs when spawning of the coral happens between March and June as this means plenty of food around to attract the Whale Sharks.The species name of a whale shark is Rhincodon typus with "Rhincodon" meaning "rasp teeth" - which is what the whale sharks 4,000 tiny teeth look like (a rasp). The teeth are about the size of a match head or 0.3cm high. Whale shark are a pelagic species. This means they swim in the open ocean but are  usually found in the tropical  oceans.
Whale shark facts
"And thank goodness whale sharks are considered to be good-luck fish.Japanese fishermen are careful not to catch a whale shark. They call the whale shark "ebisuzame" which is a good luck symbol.
The predictable occurrence of whale sharks in a few localities, such as in Western Australia, has led to the developmentof an expanding tourism industry. In this area the whale shark is a protected species and its tourism has been managed through a system of controls, including the licensing of a limited number of operators tours. In addition, there have been calls from conservation-minded divers worldwide to refrain from riding, chasing, or in any way harassing any large marine animals, including whale sharks. Recently, some observations made on the Ningaloo Reef's whale sharks provided the information that regular diving is a normal behavior of these sharks and not an avoidance reaction during contact with humans. However, the natural variability in whale shark abundance and distribution, the reasons for aggregations at some areas, and the carrying capacity of the industry are still unknown. Consequently, evidence of any impact is difficult to obtain and interpret." 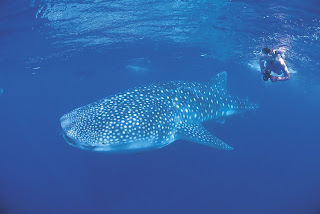 The whale shark is listed as "Vulnerable" with the International Union for Conservation of Nature and Natural Resources (IUCN).
So here on the Extraordinary Taxi Ride, Tourism Western Australia's huge promotion you'll read of passengers Cameron's and Joal's experience of diving off Ningaloo Reef and swimming with whale sharks!
swimming with sharks
What an extraordinary experience!

Labels: The Extraordinary Taxi Ride
Email ThisBlogThis!Share to TwitterShare to FacebookShare to Pinterest