Our guide quietly signalled  for us to proceed.Silently, single file,we followed as he led  us through the thick undergrowth.We'd left  the dirt track and now we were tracking spoor through the bush.Easy to do as broken scrub,smashed saplings, and torn up dirt evidenced a trail of large beasts crashing through the bush.We were following the trail of jousting male rhino. There was something up ahead, we could not only sense it, we could smell it also.A deep cloying, pungent smell wafting towards us on the gentle breeze.At any minute that Cape Buffalo we knew that was around could break cover and charge us.We'd have no warning.If they know you're tracking them, they may remain stationary, awaiting their foe to approach, often after hooking around and backtracking to lie in wait for anyone following their spoor past their ambush spot.Could we outrun it? No, but then all I had to do was outrun any one of the others!As long as I was faster than Russell our safari guide,I'd be okay.He got us into this, he can get us out! But I wouldn't be running...there was Kay to think about.All those Wilbur Smith novels of wild animal encounters were running through my mind.Imagination in a tense time like this can boil over.We were getting close, perhaps too close to our target.That smell was getting real strong!Colin our guide  held his rifle ready to bring it into firing position.That was an elephant stopping .45, and it looked bloody good to me.He'd told us we may see Cape Buffalo, but if we were so close to smell them like this,surely that's too close for safety? Africa's most dangerous beast! Hey, this was getting scary! 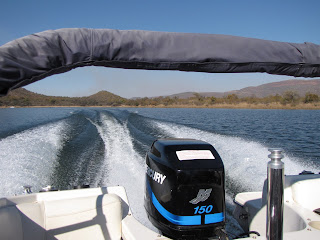 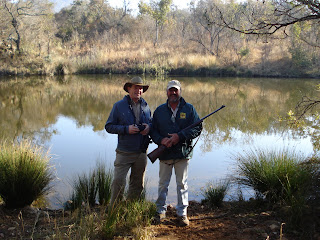 I'm sure Colin knew his job and wouldn't take us into unnecessary danger.He's got a wealth of experience,and surely been in situations like this before.He and Nick were our hosts at Imbambala Wilderness Trails Camp at Loskop Nature Reserve's Wilderness area and is only a 2 hour drive from Oliver  Tambo International Airport, Johannesburg.This was the start of our great adventure with Green Bushpig Safaris operated by Russell Frankish, a guy I had met on cyberland travel forums.Some long chats about Africa and wildlife had established a rapport, so that when we struck real problems with planning our trip last year to South Africa and Namibia, he offered a solution that turned out just great.A custom designed safari taking in all the places we wanted so much to visit, plus a lot more, and within the dates we were chained to.So our first day was driving up from Pretoria to Loskop Dam where we were met by Colin and taken across the Dam lake by outboard boat ,game driving from bank to bank all the way.What a wonderful way to be introduced to safari game viewing! Spot game on the bank, motor towards them, cut your motor,and slowly  drift right up to view them so close.Spectacular. 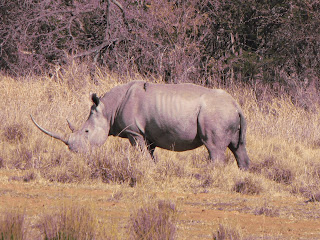 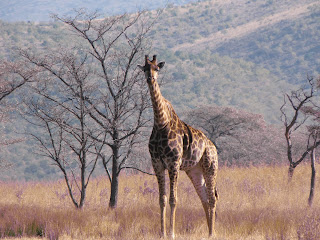 That rhino had a tremendously wicked horn on him, and we didn't know it then but we were going to find out later just how it can be used to devastating effect in a conflict. And it was our first glimpse of giraffe in the wild.Such majestic creatures.If ever there was a prize for the most graceful of creatures, giraffe would surely take the trophy!We could sit and watch giraffe for hours. We were to see many at our Imbambala stay. 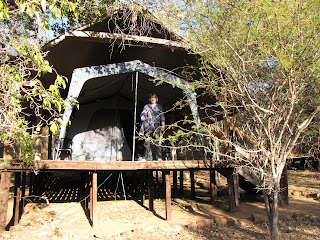 Accommodation was in the most delightful tented chalets,set high on raised platforms,strategically placed so privacy from other tents was ensured.And so crocodiles don't wander through the tent!Downside was,toilets and showers were 50 metres away rather than ensuited in our tents.But we could live with that.....we thought we'd be very comfortable.So we settled in, spruced up after a long drive, and toddled off down to the bar and restaurant, another large tented affair.Very quaint with good ambience and an outlook over the trees to the dam lake.We noted where the ablution blocks were as we were sure we'd be making visits in the dark.Colin's business partner Nick just has to be one of the great bush chefs, cooking up a fabulous meal that night.However, we struck a weather freak, with a real cold front coming through straight off the Antarctic and soon a  bone chilling cold set in.And we froze!This, in Africa!? The temperature dropped right out of that glass.Off to bed that night, in our tent,it was so cold we could feel the cold coming up through the mattress,even though we piled all the blankets from the other two beds upon us and snuggled up together.And just as we were feeling like we were beginning to thaw out, feeling a bit warm even, that dreaded nighttime busting feeling comes on....so out we go into the frozen cold.Traipsing off ,torch in hand,hoping we don't meet up with Mr Leopard who's been coughing off and on during the night on the hill behind us.Hopefully he's made a kill and wasn't interested in two frozen Kiwis! 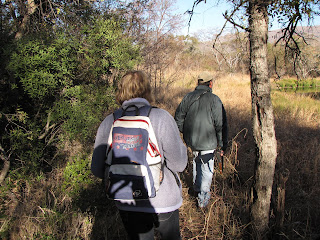 Walking safari with our host Colin as guide for the morning activities.Colin leading,then Kay,myself and Russell as tail end Charlie.And not 50 metres from camp Colin stops and surveys the ground.Pointing to broken shrubs,and churned up turf he asks what we thought had happened here.Rhino tracks he pointed out, and told us male rhino had been fighting.They are very territorial beasts and each male will stake out a large territory by creating dung middens at the edges of it's territory.Problem in a huge fenced reserve such as Loskop being that breeding may be too successful and  young males can not just wander off and stake out  new territory for themselves.Colin mentioned that in the past months, 4 young males had been found dead.Presumably killed by the dominant bull rhino,out to eliminate any new competitors.There's a case to be made for  the dominant bull to be taken out by hunters, thereby allowing a new phase of genes in the pool to come through.At the very least,perhaps a relocation program of the young bulls should be instituted.Money......
Cape Buffalo have been in the area Colin says.And we are to be very careful as they are probably still around.That warning didn't need to be made..... 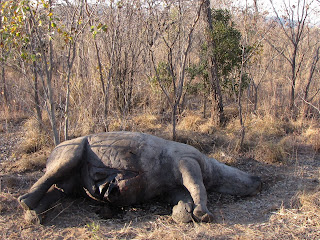 We followed  the trail of disturbed undergrowth quietly,heading towards the top of the hills behind our camp.That smell getting stronger.Finally we came upon our quarry.Luckily, not a herd of Buffalo but sadly, another dead  male rhino.The young rhino wouldn't have stood a chance.Such a sad sight to behold.The wicked length of the horn on the bull rhino we'd seen while boating in, had done it's damage.Colin said the death would be reported, and the small horn removed.So sad, and here is the conundrum.How come there are so many rhino at Loskop to have dominance fatalities occurring, but elsewhere in all parts of Africa, rhino are on the brink of being poached  out?
Imbambala Wilderness Trails was a wonderful start to our safari in South Africa.It exposed us to how Africa truly is.Raw,exciting,and at times cruel,with an undercurrent of unexpected danger, and always unfathomable to an outsider.
For more information on rhino and conservation programs refer here-
http://savetherhinotrust.org/
http://www.rhinofund.org.nz/
http://sheldrickwildlifetrust.org/html/rhino_conservation.html

Aw. I’m a bit sad for the rhino. I hope that people take some time and effort to protect species like that. But on a happier note, I think your trip went fine. In fact, I think it is a great one. Africa offers a lot of things. Aside from seeing wild animals in action, the view and the trail are among the best things the place has to offer.