Over the past week it's been sad to read these reports of the oil spill in the Gulf of Mexico and its effects on wildlife, and particularly on sea turtles, of which all species are on endangered lists. We had such a wonderful time in Samoa turtle spotting off Virgin Cove Resort's beach just a month ago, so reading such reports is particularly disturbing to us. Let's chat about marine or sea turtles. There will be quite a few links in this post, but take the time to follow them. There's a huge pool of interesting info online at those links, and we could all do with knowing more about those magnificent creatures. Meantime, while we talk, we'll travel a bit from Samoa to Western Australia. Hey, turtles range wide and far! Grab hold of one! 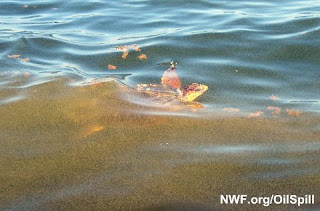 And this-
shrimpers to blame for sea turtle deaths 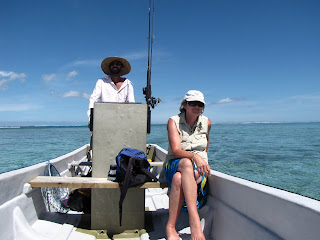 At Virgin Cove, Samoa, this past Easter, Kay and I had hired a small boat and gone turtle spotting out in the sheltered lagoon where they are often seen feeding. Brent is an enterprising like-able guy from Melbourne, Australia who with his Samoan wife had thrown in the wage working drudge, for the island lifestyle, and now fits perfectly into that beachcomber stereotype. Sinking their savings into a small runabout, he's now making enough to live well island style, by offering turtle watching or fishing tours. You could do worse I suppose. I mean, imagine who'd want to throw up a perfectly good 9-to-5 job, all that corporate career ladder climbing,  the house in suburbia, and the traffic jams of commuting for this beachcomber existence?! A no-brainer really.

And check this out for a workplace- 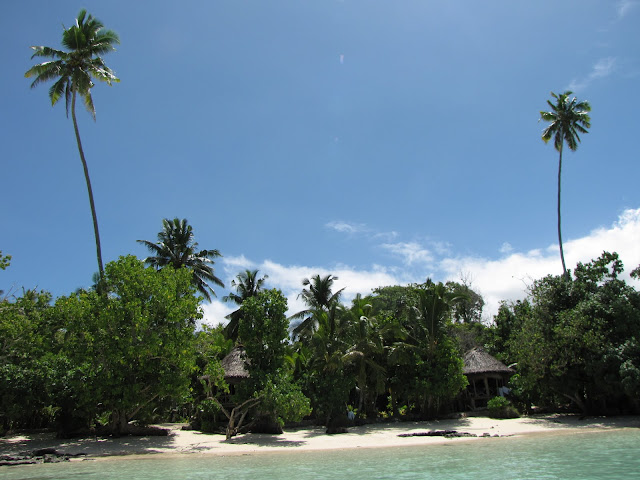 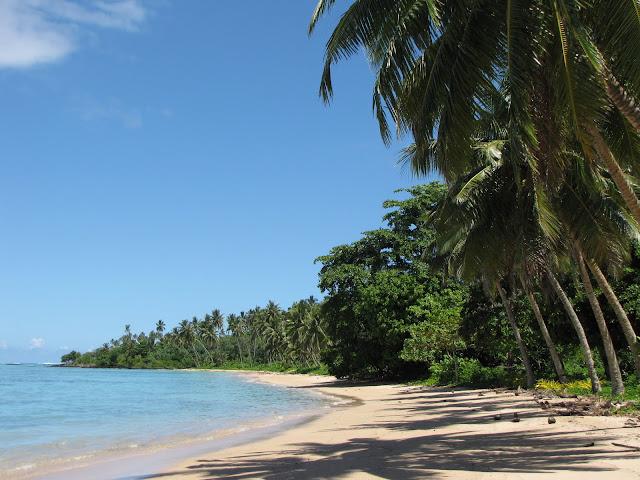 Yes, life could be worse, taking tourists out in the hope of seeing a turtle isn't half bad at all. I kind of liked that guy's guts. Not just in making that decision to throw in his Melbourne job and move his family to this Pacific idyll, but to then risk it all on buying the boat, and starting up a hire business. If you're staying down in any of the South West coast resorts near Virgin Cove, give him your business.There'll be a promo leaflet on their front desk, or just ask them to arrange it. At 65 Tala, around $33 for 4 hours.Well worth it! 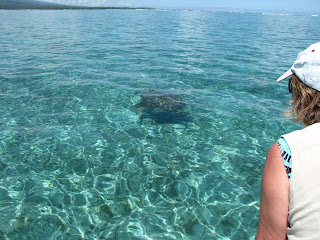 We were in luck, on this beautiful clear, still sunny day. Turtles abounded. We could spot several at once. Their indistinct dark shapes moved slowly through the waters, speeding up suddenly when we attempted to get closer. But occasionally one would surface to breathe before slipping quickly under and speeding away. They really can zoom through their subterranean world. Too fast to get a good focus.
And sorry but that's the best photo I shot.
We were watching the Green turtle (Chelonia mydas) and we saw many, but were never able to get up closer as I  guess the sound of the motor would alert them well before we could sneak up. But with crystal clear waters, we were able to observe many other fish and large rays as well as turtles of various sizes.
And we then spotted in the water, something really unusual- 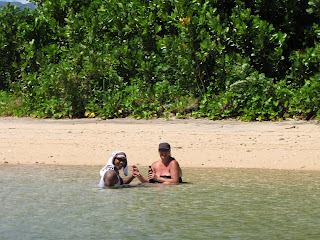 Yes it was rather hot, and that's one way of enjoying a cool beer!

"It's reassuring to see so many turtles." said Brent.
Yes it is, given the tremendous drop in numbers of sea turtles worldwide. Sea turtle report here-
report
Turtles range far from their breeding grounds, and those we were seeing may have come from as far as Fiji. So seeing high numbers around Samoa may create the false impression all is well with  turtle conservation there. A co-operative approach by all countries needs to be taken to protecting beach breeding areas, ensuring trawlers have turtle excluder devices in their nets, and limiting longline trawling.
Interesting point that Green turtles aren't green but brown. The green title comes from the colour of their fat! I guess too many people would know that....

I've become very interested in marine turtles and have had a couple of volunteer turtle conservation sites bookmarked for the past couple of years. Costa Rica really appealed but recently I came across this volunteer project up in Western Australia which because it was relatively close was very appealing.
Read Here of Biospheres Sea Turtle Project. A dream volunteer project!
I never realized until recently just how good the accommodation was ; I had imagined some tent in a rudimentary beach camp and so hadn't rushed in to booking a volunteer placement on that project, but was I wrong! - take a look Here
One of the top resorts in that part of Australia. Up to now, our experience of volunteer projects has been very basic, rustic accommodation, if any! A sleeping bag thrown on the ground. A concrete block shared room. That's real volunteer work!
There's a lack of information on Australia's Flatback turtles, nesting numbers, migratory routes, feeding areas etc. and building up that vital info while enjoying a small part of Western Australia's awesome scenery is a job for dedicated volunteers. Really great to see Australia taking such a positive approach to protecting their sea creatures.
I had been researching more about WA and came across the Extraordinary Taxi Ride promotion.
http://www.extraordinarytaxiride.com.au/the-journey.php
The Northern Coast Escape, Leg 8 travels through that area of coastal beaches. I'm keen to read more about that ride and will plan to read all the blogs, and watch the videos as Albert and wife Moira travel that leg. It's an extraordinary promotion, but being able to see all the videos is like getting a first hand picture of the area, building a familiarity and comfort zone with the place - piquing my interest - removing all the cattle stops on going there especially after Reg and I complete our ride in Leg 10, The Gibb River Road  there will be no reasons left for not going back, this time with Kay. That turtle project at Eco Beach Wilderness Resort would make a great base to assist in turtle conservation work, while spoiling ourselves, then taking off and exploring more of this vast area.

So it's amazing what sea turtles can be responsible for.