Kanna is a young San Bushman boy , a Polio survivor who is finally off to school wearing  his new custom made boots, handmade by myself. 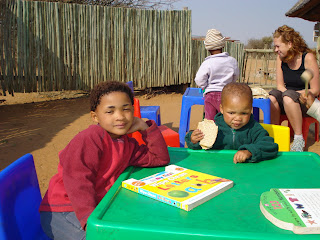 We were pleased to hear from Naankuse, when 9 of  the older San Bushman children started at the schools in Windhoek, Namibia in January. Securing mainstream education for this marginalised community is a huge step forward in providing them with a better future. Too often San Bushman children of Namibia miss out on even a basic education. Until last year, very few of the Bushman children of the families at Namibian Wildlife Sanctuary received any education at all. But an amazing woman - Gill, took up the challenge while a volunteer at Naankuse, and organized  a school program for all the children, ranging in age from toddlers to high school age.


School was set up under the shelter at the end of one of the volunteer dormitory blocks. Tables and chairs were scrounged, a few books donated by volunteers, pigs were kicked out of the way, and the kids got down to learning. Which they took to like ducks too long out of water!
In August 2009, Kay and I met up with our daughters Emma and Elissa, for a family volunteer get together at NaanKuse, Namibian Wildlife Sanctuary. Set on a 15,000 hectare farm, situated 45kms from Windhoek's Hosea Kuteo Airport, it's easily accessible and very handy to Namibia's capital Windhoek to allow for a days escape shopping, or a Sunday afternoon pigging out at Joe's Beer Hall.
We were going to spend 2 weeks as wildlife volunteers. A chance to make a little difference in the grander scheme of things while travelling and learning much more about Southern Africa than the average tourist ever does. Not for us travelling to the next photo stop and ticking that off. Nope, we want more out of our travels. Lasting memories, experiences that test us, encounters with wildlife, and a sense that we just might have made a difference.

So Naankuse was selected as our great family adventure. Kay and I had spent 18 days on safari around South Africa, met up with Elissa in Pretoria, then we 3 flew across to Windhoek. With Emma flying down from the UK to join in a day later. I had been recommended Naankuse from a guy I had met on EHRA's Desert Elephant project. He had spent time there after we finished that project in 2008, and Dave had raved about the place, and revealed falling for a cute wee baboon there.... 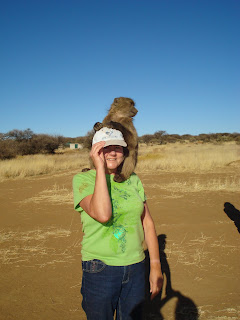 Little did we realise just how easy it is to fall for those cuddly and fun, mischievous baboons!. Gorgeous!


Along with caring for the variety of rescued wildlife, Naankuse offers volunteers other programs to use their skills. Choose what suits you here-
Wildlife Conservation Volunteer, Teaching and Wildlife Volunteer, Lifeline Clinic Medical Volunteer, Carnivore Conservation Volunteer or even Mechanic and Tradesman Volunteer. For more info go here-
Naankuse
Accommodation is basic but adequate. We found ourselves in a room that could  take 3 beds easily, but the staff looked after Kay and I, and we didn't share with anyone else. Normally it's 3 to a room. Meals are filling, varied and well prepared in a large kitchen/dining area that is usually opened right up for the warm months. I think most couldn't wait to get at  the warm, fresh muffins served daily for morning tea! Kay has just reminded me about the half cooked spaghetti one night...and the other night when late comers missed out altogether! The joys of volunteering!
Hey, you want 5 star. You book 5 star!
Showers and toilets were cleaned everyday by the local San ladies. Just as well they were on the job each day, as the pigs had a habit of wandering through them if someone had neglected to latch the gate in the fence outside our block. And if one of those juvenile baboons escaped our grasp while bathing them it was a mad ruckus in the shower block trying to catch a flying bundle of screeching fury! Bedlam at times but great memories.
And the San ladies did all our laudry and got it back to us daily.
Right outside, at the end of our block was the school area where Kay got involved with looking after the children. She's a pre-school teacher back home so slipped straight into the role, teaching them a few new songs and games. We learned that when the children first all arrived at school, none of them knew how to play. This was a new experience for them. But slowly they cottoned on, and it was rewarding to see how each looked after each other. The eldest looking out for the younger, and they looking after the youngest. With the father away working on the farm, the mother would have to leave the children, no matter how old they were to their own devices for several hours. Hence the start up of the school served another purpose in that all the children were being cared for while the parents worked.
Around the back of our block was a trench in the ground in the shape of a rectangle. This we found out was the foundation trench for the proposed new children's school. After you've spent time during the heat of the day digging that out more, it kind of sticks in your memory! But dig we did.

Back home,we followed on Naankuse's Facebook site the building, painting and grand opening of Clever Cubs School. What a wonderful achievement!
Facebookers go here -Clever Cubs
And in just a few short months, the older children had received enough tuition to allow them to start school in Windhoek.
Watch a video clip of the children’s first day at school Off to Windhoek school

We'd noticed one of the boys at play, hopping around awkwardly, obviously crippled in some way. Namibia is one of the last few countries where polio was known. World Health Organisation expects this disease will be wiped out in the foreseeable future. Kanna is a polio survivor and one leg is severely stunted and his shoes were badly worn and desperately in need of replacement. But new surgical boots made in Cape Town were beyond his family's ability to buy, so Naankuse would need to find all that money. Being a custom and surgical shoemaker myself I could hardly not accept the challenge. So we measured him up and on my return home, I made him a pair of black boots suitable for school wear.
And sent them over at no charge, taking 3 months to be delivered. I guess someone finally got off their backsides in the local Post Office after a tracking notice went out! But we were so thrilled to hear they finally arrived for Kanna.
Have a look at his smile! 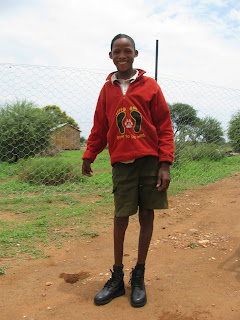