In 2014 Scotland will hold a referendum on independence from the UK. This historic occasion will be celebrated by many whatever way the decision goes.
As for those, like myself, living in many countries around the world who are descendants of the Scottish Diaspora which has its roots in the failure of the Jacobite Rebellion culminating in the massacre at Culloden Moor on 16th April, 1746, and the later Clearances and abject poverty of the 1800's, while we may all feel that deep inner need for independence as part of our psyche of our Scots heritage, we should remain neutral on the independence vote! It is the resident citizens of Scotland who will live with the consequences, good or bad, of the decision they make, which may include having to re-apply to re-enter the EU.
News -scottish-independence

"That which has been long denied is most mightily desired."

The following verse attempts to explore the roots many of us feel for our 'Homeland', and what calls us back, even if just to trace ancestry as a tourist.
Here I give you- love and commitment, war and defeat, history past and times present, but above all a hope for the future. This poem has its genesis with words spoken by my wife when we stood within the lines where Mackintosh Clan stood on Culloden battlefield prior to their valiant but futile charge on English bayonets and grapeshot.

"If we had lived in that time I would have seen you and our son go off to this battle and never return."

So what were the effects on the women and children left behind, the families that starved with no man to provide, or of the loss of leaders in the wee villages, the subsequent suppression of Scottish culture throughout the Highlands, and the deportation of Jacobite sympathisers to England's colonies in  North America?

In 2014 the cycle of history turns again.

Click on the photo to bring them up in large slideshow format.
All photos and verse by Jim McIntosh. 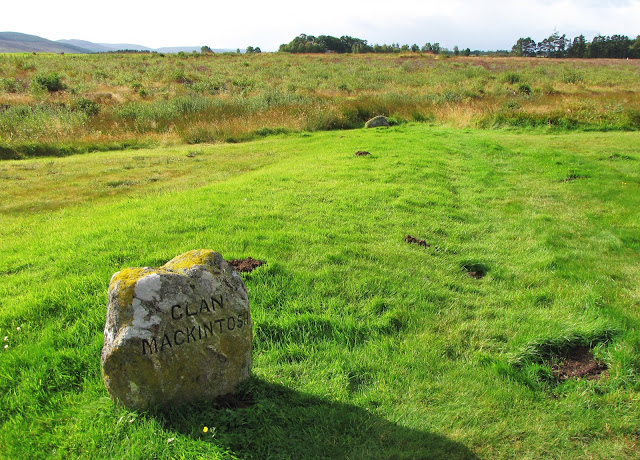 Freedom proved so ephemeral
'twas no for glory that we vied
but for our country, Clan, and family
that we fought, and for those we died. 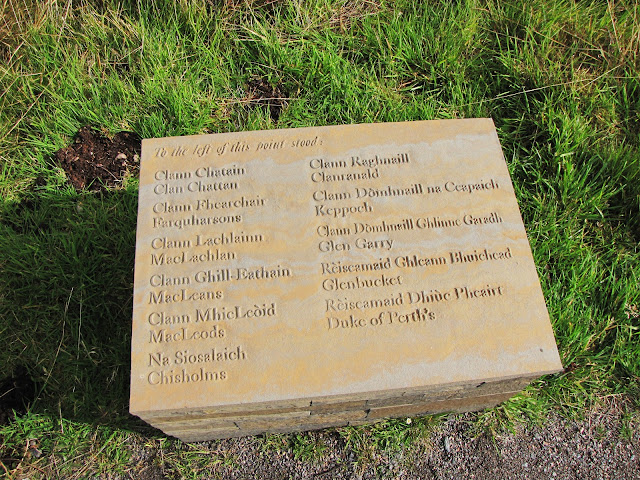 Where the Highland Cat is stealthing
where the doe and stag do ply
there you'll find ma wraith a-flying
above the place we once did lie.

Amang purple heather and green bracken
deep within the Glen of Spean,
'twas on the brae of Beinn a' Chaorinn
when our bodies came together,
you grasped ma heart my bonnie lassie,
ma ain true love, Eilidh. 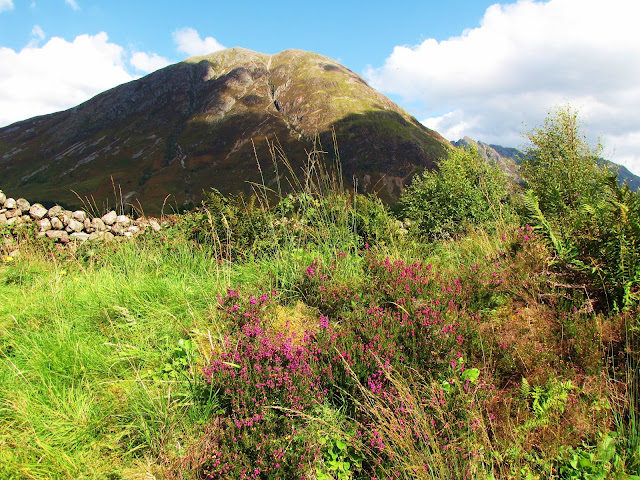 When you feel a wind on red cheek
and warm breeze lifts your golden curl
'tis ae fond kiss, ma tentie touch upon you:
'tis all I can give you now ma bonnie girl. 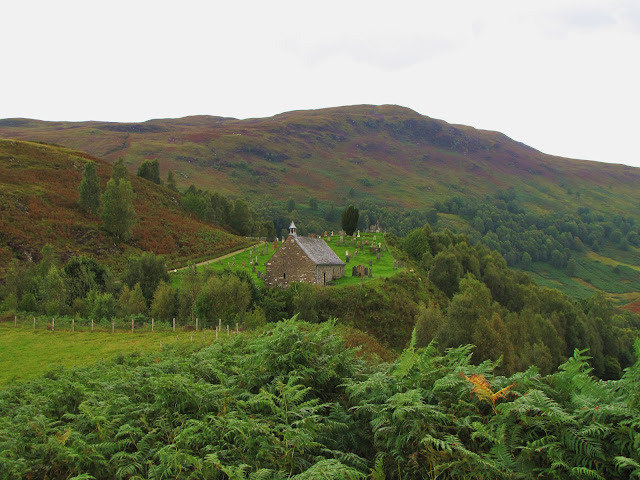 Freedom cannae be found in these fair glens
it has long e're fle'en across the sea.
Now your lane a task of love I set you
to raise our bonnie wee boy bairnie
and bear him safely to the new country.

Raise in Freedom's embrace our boy bairnie
in your new hame across the sea
there my wraith will breeze you from above
and salve your aching spirit's need.
Will you do that for me, ma ain true love Eilidh? 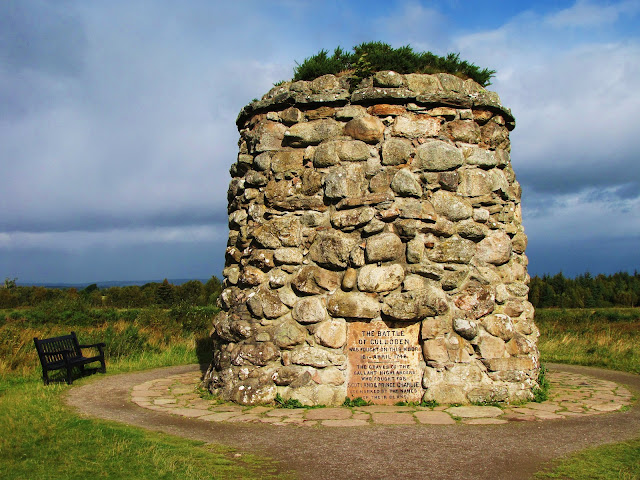 That is a very beautiful poem you wrote, Jim and very Scottish too. That would be more beautiful if you read them with amazing Scottish accent that many people love to hear.
The Highlanders, is one of my most favorite tv series. I love the heroic story about clan McLeod.
For so long, I heard about the beauty of Scotland as one of the most heavenly landscape on earth and I regret I was unable to visit your beautiful homeland when I lived in Europe. But for sure, I'll visit it one day after the independence, where Scotland will be a much better place!!!

This is really excellent Jim and thank you for sharing. Most of my family left Ireland a really long time ago. On my father's mother's side they came in the 1600s. On his father's side they came in the early 1800s - refugees and rebels from the hell the English put them through. O my mother's side they fought with Napolean III then married French women and came over in the 1870s and 80s. Ive never been to Ireland (or Scotland for that matter) and so, like you, I think I feel distant from that experience and, really, not at all "Irish". I think that the tide of history is slowly turning away from the colonizer and brutalizer - and turning away in a peaceful and democratic way - is excellent. I'm nothing but observer and cheerleader.

Very beautiful Jim! Thanks for sharing. I really love the story behind how the poem came about. I think you really captured the place and experience, probably not an easy task!!

I haven`t been to your blog in a while Jim but I am so glad I visited. What a beautiful poem and your photos too!

Loved it! That was a beautiful poem...and I loved the pictures that accompanied it!

Oh, it is so wonderful and touching! I know what is going on at present since my best GF is a Scott and I can read her mind since we share vibes very strongly. Yes, at the end of the day everybody reveres his roots most proudly. Best way is to pay homage to past tragedies in this poetic fashion and forgive the 'perpetraters'.
-Portia

All I can say is "WOW!" Best yet is right. And I love the way the photos weave in so perfectly with the text. Have you given any thought to publishing an anthology at some point?

Thanks for your inspiring comments Neneng, and for the same on Facebook. I originally wrote this in English then ran it past a Scots friend who suggested some changes to align it more with Scots readers but not to completely lose the English reader. So this is how it has turned out, not purely Scots but just a nice natural blend.You'll love Scotland, in many ways similar to New Zealand, mountains, vallys, the sea never far away and large areas of unspoilt wilderness.

Feeling 'distant' Jim is understandable, but as you retrace your family history you'll answer the call to go to Ireland, and in many ways you'll feel very close.
And you'll have a greater appreciation of the country, and its people because of your connection and the research you go through.
Stick it in your bucket list!

Thanks Caz. I left out of the preface all that my wife said.
After this- ""If we had lived in that time I would have seen you and our son go off to this battle and never return." -came "And that would have broken my heart."
Behind all this is the history of my ancestors that stretch back to the battle at Culloden, and tracing that history was very much part of this trip to Scotland.

Nice to see you again Nelieta. Yes, and I have catching up to do at your blog too!

Thanks Jessica. it's been stewing and simmering for a long time, ever since Scotland travel 2 years ago.

Hi Portia, it will be very interesting to see the results of the vote for independence. There are many who don't believe Scotland economically can go it alone, with only 5.2 million and high unemployment and welfare dependence. But others argue that being in the union has arrived them at that situation, and independence may force a new resourcefulness upon Scots to stand on their own feet rather than rely on Westminster welfare support.

Barbara, thanks for the "WOW!"
I'll let you know about an anthology...