Hey, this is a great trip!

"Jim, I'm having the greatest holiday of all! " Kay says.!
And it is  nice..no..it was  more than that, it has been wonderful.,fantastic and so interesting. To a New Zealander of Scottish descent,Scotland is just so welcoming.It feels like a country that we have come home to, being so familiar. Everywhere we travel we come across towns and places with names we're so familiar with- Aviemore,Glenorchy,Glendale,Glenmore etc. We drive on the left, and we speak the same language....well in a fashion. Get that Scot to talk slowly and we can understand that heavy brogue,...as long as they don't start on with the Gaelic!
We're not spending too much time pre-planning what we're going to do or where we're going. Just a rough idea that we'll travel around Scotland clockwise starting from Glasgow. So after being absolutely frightened off by the masses of tourists debussing at Gretna Green and clogging up the toilets and somewhat tacky souvenir shops there, we hightailed it way out west to Stranraer  then drove up the coast and found a quaint B&B at very picturesque Ballantrae. Placed on the coast where the southerlies blow straight off the Irish Sea it's very exposed, but the weather held ,even though dark and foreboding. Our old friend Sol did his best to cover us with his light, but he was only just managing to stay with us. Stranraer and Ballantrae were once important herring fishery ports and a little a of that industry must still remain as we were enveloped in that gorgeous aroma of smoked herring as we drove along. Mouth-watering!
From Ballantrae we plotted a course into our Tomtom navigator for Luss on Loch Lomond. Tomtom is now called Sally as Sally knows everything and let's you know it! In fact she knows more than me, so I can't argue with that! And I didn't argue with her when I asked her to take us to Alexandria, where our SYHA hostel is, ...and she promptly took us into the Dumbarton  hospital and dropped us right at the entry to the morgue! Not quite the right Alexandria...
Anyway Sally then took us up to Luss where we fell in love with the place and decided to have a night there. Luss is the seat of the Clan Colquhoun and where Saint Kessog brought Christianity to the area. Little stone cottages, bedecked with brilliant flowers,tumbling down to the edge of Loch Lomond. Beautiful and quiet. While we waited for the tourist fug to clear we took a long but rewarding drive around the Loch, up to Tarbert then down the west side of Loch Long then down to Dumbarton Castle on the Clyde.http://en.Wikipedia.org/wiki/Dumbarton_Castle
We laid siege to the castle, rescued William Wallace from it's keep,and placed him on the Scottish throne only to see him once more betrayed and off to London.....such were the dreams conjured up touring those battlements. 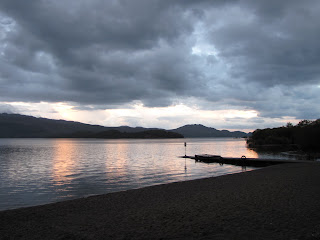 Back in Luss we wandered down to the water's side again. Sol was low in the sky,sending a weird light under the dense cloud cover and across the loch, and we hurried back to our B&B to get our camera. I couldn't miss the opportunity for photography in such unusual light conditions. I'm getting more and more interested in low light or silhouette photography and it was just too good a chance to not experiment! 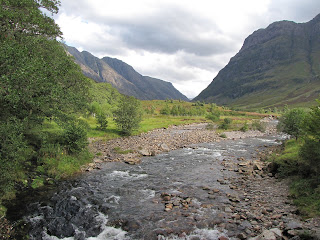 From Luss we headed up the A82 which would carry us through the area of Glencoe and on to Fort William. Glencoe is a long valley or glen,framed on both sides with 1400 metre high towering mountains, breathtaking in it's beauty. Now a jumping off point for many walking trails,mountain climbing and skiing in the winter season. Also famous for the massacre that occurred there in 1692 , when Government soldiers , led by 12 Campbells,who had a long time feud with the Glencoe MacDonalds,carried out a surprise attack upon their MacDonald hosts. resulting in the killing of 38 men, women and children, and unknown deaths among those that fled the slaughter and died of exposure on those high gale and snow lashed mountains surrounding the glen.
In no rush to go anywhere, we visited a museum in Glencoe Village, then the Visitors Centre, learning more about the history of the area. Then wandered one of the many hiking trails in the area,enjoying the lush vegetation,in dramatic scenery  and noting the removal of introduced pines and reforestation with the true Scots Pine. Apparently less than 1% remains of Caledonia's original Scot's forest cover. Reforestation plans are important to arrest the decline of endangered native animal specie such as pine marten, deer, and our own Clan motif, the Highland Cat. We hiked to the top of An Tor where a rocky outcrop stands sentinel to the valley, thought to have been the site for pagan sun worshipping rites in pre-Christian times. So the urge was strong to drop our clothes,and  prance around naked imploring Sol to continue honouring us with his presence! We'll need all the help we can get in this country! I think it has worked. Sol shone through, fighting off the dark clouds and throwing his bright light wherever we went.

Hey, this is a great trip!

Labels: England/Scotland
Email ThisBlogThis!Share to TwitterShare to FacebookShare to Pinterest

Sounds like it is a great trip! I would love to do it.