Travelling  from Pondicherry down the coast of Tamil Nadu, I can remember that our view from the high seats in our Dragoman truck allowed us commanding views over the low undulating countryside. It was incredible to see an unbroken line  of wreckage marking the high tide line of the tsunami's penetration! We were miles inland at times, but still that line was so evident.And here and there villagers picking through the flotsam. Lots of plastic rigged up as shelters, as houses had been completely obliterated.
We  watched these scenes, but our comprehension of such devastation was lacking. It was almost like watching it on video, it was so removed for us. We could go home tomorrow to our warm homes, and be greeted by loved ones.How can you take in that these people were searching for their family members amongst their home's rubble?
Somewhere along the way down to the bottom tip of India, we bush camped. Dragoman trips will have a mix of nights bush camping, and accommodated.We'd hit the jackpot in Pondicherry because the tour kitty was enough to cover the cheap hotel rate we negotiated there, rather than camping at the beach camp.Didn't want to be near the beach anyway. 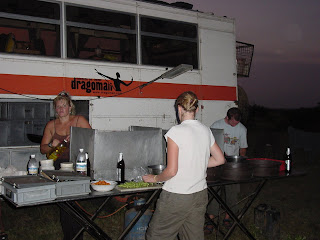 So it was time to bush camp.Somewhere secluded, quiet, away from the road. Growing dark and still no suitable site but a turn off the main road took us down into what appeared to be an old marble quarry. No signage, just old shattered marble blocks and tailings, and a km away cliffs of pure marble. And a quiet, reasonably flat area, and it was out  and up with our  the cook tent followed  by our two person ones. Looked a very safe area to get a good nights sleep.
Then BOOM! BOOM! BOOM! Huge explosions rip through the night so frikken close! Our deserted quarry was not so deserted! It was deserted because they had blasting operations that night! We were lucky we hadn't driven further in. But this was India, with it's very stringent work place rules, barriers, hard hats, DANGER signs , gate security guards and roadblocks....Yeah right!?
Blasts went on for a while , and carried on a wee bit longer, but from our camp.  James and the lads got out all their huge firework bangers they had left over from New Years and started answering them back. Boom, boom boom! Hilarious. And probably a bit confusing to the quarry men as they would have been  in a bit of consternation wondering who planted that  dynamite in the wrong place! 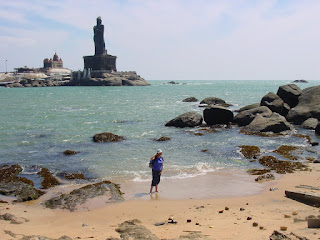 Cape Comorin is the furthermost tip of India, where you can paddle in the waters where the Indian Ocean, and Arabian Sea meet the Bay of Bengal.Swami Vivekananda Rock Memorial occupies an island around 500 metres offshore.A place of pilgrimage a short boat ride away.
As we dabbled our feet, a local guy came over and warned us not to do that.Thinking we were breaking some religious custom we asked him why.
"Because the water may get you" he gravely said."When the water went away, people started walking to the island, thinking prayers had turned back the waters. Then the wave came and over 300 were swept away!"
300 lives lost In one spot!What a tragedy.I think most of us by this time were very affected by witnessing the aftermath of the Boxing Day tsunami and it certainly added a whole new dimension to our overlanding tour. 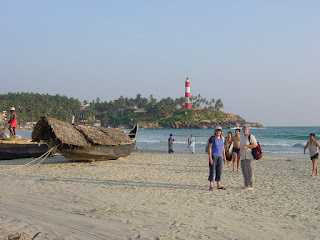 So it was a relief to pull into Kovalam Beach and spend a few days enjoying sun, sand and sea.Here we just blobbed .It's become a very popular alternative to over touristed Goa .Smaller,less developed but still a wide range of accommodation from backpackers to good quality hotels right along the beach. And the beachfront restaurants are packed and ready to party at night.But dining on prawn fried rice was not the smartest move that evening.I learnt next day that the tsunami had scared away all the fish,local fishermen were catching nothing, and seafood was being trucked in unrefrigerated for the restaurants.3 days later, still violently ill it was off to a medical centre for antibiotics! The joys of India....

India is a vibrant, colorful,visually rich country, with layers of history. And a multitude of castes,beliefs and religions that sometimes tear communities apart. But it's also rich in spirituality, possibly the country that is most so, and many foreigners travel there seeking enlightenment, and pathways to that inner vision. I never really paid too much heed to that, and I certainly didn't travel to India on a similar quest. But sometimes you can't avoid it.Or more correctly,as in my case, it just reaches out and gently touches you, and leaves it's mark upon you.
Back in  Mahabalipuram  I had taken the time, during our never arriving lunch at a restaurant ,to wander down the little main shopping street where I had spied a sandal maker's shop.Being a shoemaker myself, the simpatico arises and I have just got to have a chat and admire another craftsman's work. And I also appreciate that leather workers in India are of the lowest castes, being handlers of dead animal skins. Over the centuries only the very lowest castes would skin dead animals and tan the hides. Untouchables. My thoughts were of how this sandal maker would be faring, as the aid , when it did finally reach this community, would trickle down from the top. And I was also aware that the  owner had just thrown a beggar out of our restaurant a few minutes ago, but that beggar was still hanging morosely around. These people would be last in the feeding chain, if there was one.
I didn't need to buy any sandals, I make my own. But I did buy, and I didn't haggle too hard for them either, just enough to go through the ritual and enable my sandal maker his dignity in knowing he could sell his creation. And he with great honesty and pride proffered me change for the notes I'd tendered. So gesturing to the beggar down the street, I asked him to give him all my change, enough perhaps for a few meals. The sandal maker ran up to the beggar, a joyful exchange took place, and a few others got involved, all looking at me.Then the sandal maker came back and in his poor English said how good I was.
"Today I can feed my family after 3 days! And Sir, you have fed another family."
Then this sandal maker placed his hand close to my forehead,closed his eyes, and started muttering.As he did that, a warm glow seemed to register in my head. I'm not too sure what was going on. I just thought I'd handed out a few dollars to buy something to ensure money got to where it was needed without actually handing out and encouraging begging.
"I have blessed you Sir.You are blessed with all my being!"
That was my Tsunami Blessing.
A simple action, an insignificant event, and over and done with in a minute. No big deal. But upon me, it left a bigger impression than a tsunami. It's probably the single most remembered event in my travelling experience.(Apart from elephants jumping out at us!) It truly was a blessing. Because whenever I look back upon how our travel has changed, that moment triggered it.
I somehow feel that that sandal maker gave me something far greater than just a cheap pair of sandals in return for my few dollars.

And now we plan our travels differently.Our return to India 2 years later was to visit a child we sponsor through Childfund. Read about our village experience here-The Village Pump! On that visit, the genuine hospitality of the villagers was so humbling. And since then we've sought out volunteer projects with a mix of wildlife conservation and work with village communities. In a few days time we leave to visit another child we sponsor in Ethiopia.So for us, the Tsunami experience had a deep effect on us and on our expectations from our travels.It's more about people and their lives or giving back in conservation projects. 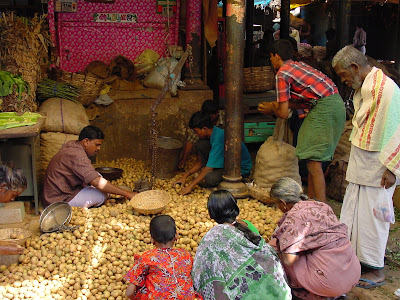 So for all you other travellers, have you ever had a moment on the road where something made you stop and think about what you are doing? What are you seeking? What impact are you having on the people and places you visit? Was it a sudden kick in the pants that made you stop and consider your actions? Or has it been a cumulative gaining of experiences and wisdom that slowly came upon you,and made you question ?
Or do you  even question your impact as a traveller upon the communities that allow you entry?

Hi Jim: Thank you for your generous offer to donate a pair of your handmade boots to this year's Passports with Purpose campaign, through which we will build a village for 25 "untouchables" of the Dalit caste in India. I must tell you that your story brought tears to my eyes. Like you, my travels focus on cultural immersion and I am constantly aware of how very fortunate I am and how terribly unfortunate much of the rest of the world's population is. I do whatever I can, wherever I can, on a one-to-one basis because then I know the money/services reach the people who really need it. But my one exception (so far) is Passports with Purpose, so again, thanks so much.

We're very much like you Barbara, wary of who we give money to, and making sure that it does get to those we intend it to directly or to smaller organisations working directly with people.
I've sent PWP an email and am awaiting their response.
Meantime keep writing on Nepal. Tried to get there once but the border was closed at the height of the pro-democracy events, so we read what you're writing with interest.

You have come by quite close to us (Chennai). Well, a long and detailed one, this. Traveling makes philosophers out of all of us.