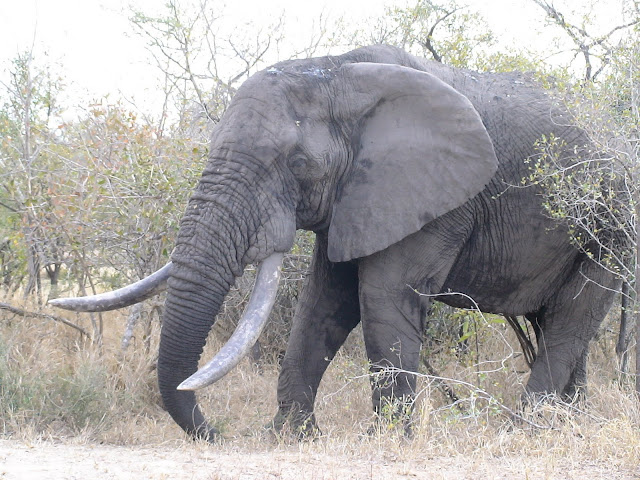 My wallpaper photo this week is The Big Tusker !

Can you imagine being so close to that? Just a few metres away. Your life in the balance of that huge creature's whim. But it was strange not being afraid, just admiring that huge bull ele, and feeling such delight, such amazement at being so close to such a beautiful creature. The largest land animal of all.
And we had been much closer...just minutes before! And the amazing thing is, that we never saw it!

How can you not see an animal that big, even when you drive past him, as near as 2 metres away? But in Namibia I had seen how invisible they are. You can be searching all over the landscape, but you won't see them....until they move! Stock still their legs to the inexperienced eye look just like tree trunks. The body covered in dirt from their dust bath will perfectly camouflage them into the bush and colour of the landscape. And that's why they can be so dangerous. Because you can drive up so close before you see them, and they may interpret your approach as a hostile threat, and react.
And now we had driven right up and past one, by the width of the thickness of a bush!
This was on our private safari, with Russell Frankish of Green Bushpig Safaris. I had started off relating our tales of this so exciting time on our safari. Read here- african-safari-with-greenbushpig.html

and had told of our time at Imbambala Resort at Loskop Dam and our rhino experience. So a few days later on we had made our way down to spend 3 days on safari through Kruger National Park. Kruger is a jewel in the tiara of South Africa's National Parks. There are many parks, each having their own great features, and while most one-time tourists will head to Kruger, do research the others. And the best place to do that, is a wonderful forum with every bit of info you would want to know here at SA's National Parks website and forum-www.sanparks.org/forums
The members there are tops in offering advice, welcoming you, and putting up all sorts of information. I love browsing their forums.
Getting back to our time at Kruger, We stopped for lunch at Skukuza at the restaurants and shops there. Buying our lunch and looking around for seats, we wondered why, in the heat of midday, no one sat right in under the shade of the open sided sheltered area. But you only had to look up and see why! Bats! Bats in the ceiling rafters. Rather cute...but you don't want them pooping in your flat white, or mayonnaising your salad! So everyone sat just outside in that outer ring of confidence.
Now most people want to check off the Big 5: Elephant, lion, buffalo, rhino, leopard are what most want to see. But there are so many other wonderful animals to see. And my favourite experience was seeing quite unexpectedly,was a pair of Southern Ground Hornbills walk right out of the scrub and across our path. These are huge birds, the male resplendent in his glowing red wattle and huge beak, his partner quite drab in comparison, around the size of a turkey. 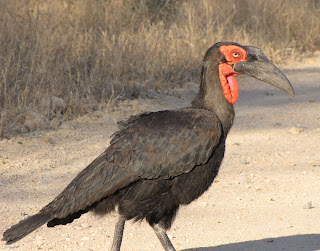 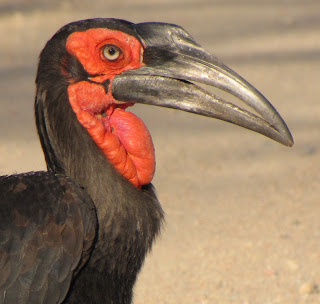 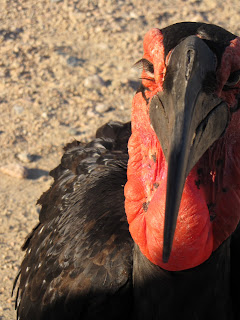 Isn't he beautiful! That bird wandered right up to our car. My window was down, and I'm poking my Canon out the window and that cheeky bird pecked my camera!
Then he went on to pose and adopt various positions as if he was a model, attempting to get his best posture and profile to the camera. Someone must have trained him well.
Sadly his friendly nature may be his undoing. They're high potency fetish material for native witch doctor practices, muti it's called. And numbers are declining rapidly.
You may notice blackish specks on his wattle, they're ticks. 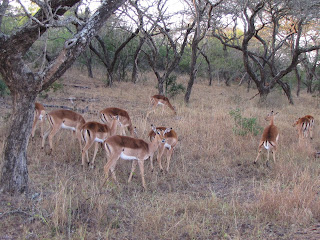 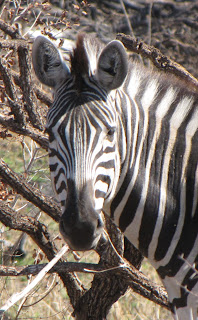 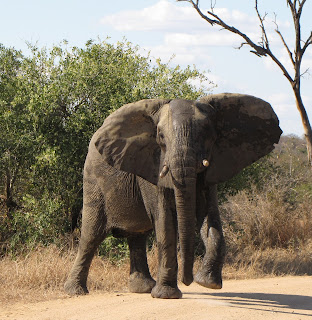 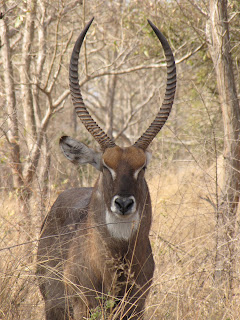 A click on any of the photos will bring them up on your screen full size.
There's a lot of wildlife in Kruger, and sometimes it seems that if it's not standing posing for your camera it's coming straight at you! That ele in the pic just above gave us a warning that we better not come any closer. She was outrider, or flank guard for her herd. We needed to drive down that road but she was on one side, the herd on the other. The last thing you do, is drive between them. Foolhardy. You just don't do it! That is the zone she is guarding.
Well, a full on warning charge happened later on. As we were driving down another dirt track, we spotted a small herd of elephants to our left down in a shallow gully, with a car on the road watching them. For some reason Russell pulls up beside the car, not behind, luckily.... because at that moment to our right, we hear a high pitched trumpet of panic which could only be a baby elephant hollering for it's mum! That baby had been slack in crossing the road with the herd, had finally woken up to the fact it was alone, and had sounded off in panic. Suddenly the car beside us shot backwards at full speed! Had we been behind they'd have come through our windscreen. The female driver was white faced, knuckles clenched around the wheel in panic, as a huge elephant charged straight up the bank at her! And as she reversed so quickly out of the way, that left us in the path of that onrushing eles wrath! Ears out wide, trunk high, she came at us! Slowly Russell reversed a few metres, and the elephant carried on past our front towards her panicked baby. Phew!
To his credit, Russell kept his cool, and calmly and slowly reversed out of the situation. And we often think back to that experience and remember that the excitement of an unexpected happening like that, is real Africa. There is an underlying tension wherever you go that no other place can offer.
That's what draws us back.
Shortly after, we drove down a very narrow dirt track, and passed a thick high bush where the road dead ended. Russell reversed and turned around then drove the car over a fallen branch. Strange, that we hadn't seen that before...where had that come from? Now you're not supposed to get out of your vehicle in any National Park for the very reason we're about to experience....that underlying tension may just snap unexpectedly!
Russell stopped and said he'd better get out just to see if there was any damage.
"Nope, no damage.....uh oh .... " Then very quietly Russell says for us both to just freeze and not do anything.
"I'm just going to get back into the car and we will all just sit quietly.There's a big elephant in the bush beside us! I can see his tusk poking through the bush!"
We looked up just as a branch snaped and the bush was shaken.Thiswas happening just a few metres away. We'd driven past that bush, and it brushed the side of the car!
Then the elephant took a few steps through the bushes and this monstrous head and huge tusks came into view. Kay said later she had never been so frightened before. It was a moment that locks into your mind forever. Even I was unedged and it takes a lot to rattle me. This was so unexpected.
So there we were, so close to a massive bull elephant, and we'd never seen it. We even had the best guide in all of Southern Africa with us. But I guess he was too busy looking at twigs under the car. Must have been distracted I suppose.
"We're just going to sit here quietly."Russell whispered."That bull knows we're here.He's comfortable with us.If he wasn't he'd have let us know by now. Elephants have got used to cars in Kruger, but you never know."
"Problems can arise in a situation like this where a tourist reacts to spotting that bull by slamming the door, revving up, and screaming out of the way.And that could provoke a real charge by the elephant."
We moved away slowly a few more metres, and then the bull walked right out into full view. Magnificent. So huge, and yet so peaceful and quiet, and so comfortable with us and the car.
That was just one of those unforgettable moments
And that was real Africa! 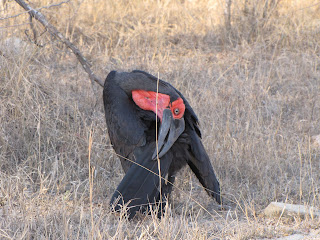 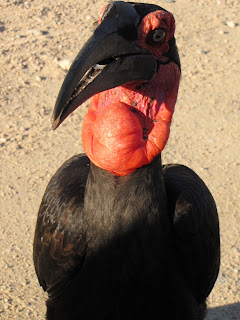 Great shots!! They are natgeo alike, can I use one as a wallpaper??

Which one?It's OK as long as you credit me, and never forward them om on.Hey, and you will have to enter my shoe competition.....:-)
Got loads more photos.I'll get around to loading a few more up soon.
But my favourite has to be that poseur of a hornbill.He was a star!

Love that hornbill! He's awesome!! OK, and I guess the elephant's not bad either ...

Isn't it amazing how much comfort we take on those little jeeps while on safari? In the Serengeti, we watched 3 young lions tear into a gazelle and chase each other. When they were done eating, they curiously came up to our jeeps and surrounded us. One was about a foot away from my face, right outside my jeep window. Yet no one freaked out. I'm sure the reaction would have been completely different if we didn't have those jeeps for protection.

Red, that hornbill is my favourite, and I'll put another up tonight.He was just such a poser.
Kristine, any time you feel like writing about your Serengeti experience, just let me know and we'll post it up here.
Would be great to have that sort of experience to inspire others.
And with this post, I was going to lead into discussing a lot of the work some conservation groups are doing for elephants.So stay tuned in.

I'll use the elephant just for my home wallpaper :)
Yes, sometimes they seem to pose like models... my cat does the same =/
Waiting for more shots!

Well I put two more of the hornbill photos in.But I'm thinking I may just have time, before we take off to Ethiopia, to put up a post ,more like a photo essay, on wildlife up close seen on our Green Bushpig Safari.I'm glad you enjoy the elephant shots.Such a huge problem in many parts of Africa with elephant,and rhino poaching, and numbers are dropping rapidly in some countries.Yet in Kruger, they have been discussing culling them!Such a conundrum.

I Stumbled and left a review. Great photos! I had no idea this type of elephant was the largest land animal!