Doug, our maverick taxi driver on the Extraordinary Taxi Ride  took Reg and me, in the late afternoon of our first day in Kununarra on a wee detour to show us the sights, and we arrived at the Ivanhoe Crossing of the mighty Ord River.This crossing is a road built as a weir, not a bridge.
Check any of the videos out here-so exciting .. Ivanhoe Crossing video
I don't have any photos as the campaign guys had told us they'd be supplying us with cameras so I had left mine at home.
As we drove  up, and the crossing hove into view I had the distinct feeling I'd seen this place before.Took me a while then memories of a wildlife TV documentary flooded back.This was the crocodile crossing!There's a terrific feature of this crossing where at a certain time of the year the fish are running up the river to spawn.And crocodiles congregate here in huge numbers for the feast.The documentary showed this crossing with many crocs lined up side by side,salties and freshies,on one side of the weir, mouths open just waiting for fish to jump in to their gaping jaws.Now there's 2 types of crocs in northern parts of Australia, Freshwater(Freshie) or Crocodylus Johnstoni and the more dangerous Saltwater (Saltie) Crocodylus Porosus.And here both will be found.
A few locals were fishing from the banks.And when we asked about crocs, "Not worried about them , long as you keep your eyes open you're right!"
We didn't want to test that as we just didn't know what to look for.And as we watched a guy come back from fishing the far bank, and carefully walk across the weir towards us, Doug regaled us with tales of another local guy doing the same foolish manoeuvre, get taken by a Saltie a few years ago at this very spot!
All through our 9 days Gibb River Road we knew to ask locals if there were any crocs in any of the rivers or swimming holes.And next day when we'd flown up to Michell Falls Wilderness Resort, and I was swimming in the resort's pool, (which was just a swimming hole in the creek running through the camp and supposedly croc free..)I couldn't help remember that film Jaws and that huge shark coming up at that swimmer from below.But in my imagination it was a huge saltie coming up for me! Later on at Windjana Gorge we were to see crocs up close.Mainly the freshies which tend to shy away from humans.But dangle a limb in the water, and they'll go you if they mistake you for a fish, and their extremely sharp teeth will make a nasty wound.
I measure the size of a croc by the number of shoes I could make out of their belly skin, being the canny shoemaker I am.But I hasten to add that long ago I made a decision never to use the skins of an exotic specie just for a pair of shoes.I reckon the skin looks more beautiful on the original wearer!And sadly it had meant that crocs have been hunted to the edge of extinction in the past.Particularly the saltwater kind.It's only the belly skin that is used in designer bags, shoes and belts, and the freshwater croc has extra ridging in the belly area so they aren't taken for use.A very useful defence perhaps.I can remember way back in 74, and Kay and I doing the sort of unthinking usual touristy thing of visiting a crocodile farm in Singapore.And coming away disgusted with the cruel practice of farming such awesome, deadly but beautiful reptiles.Never again have we been to such places. 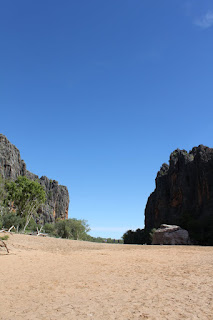 Windjana Gorge is an awe inspiring place.An ancient reef formation in the eons ago sea that once covered this land.A testament to the massive forces and the millions of years of Nature's architectural handicraft.Now the reef stands a 100 metres high.The gorge itself  and surrounding area now a national park. A river runs through the gorge and crocs inhabit it's many pools.Reg and I were filmed walking through the gorge and observing the crocs.
But we were then held in fixed awe as we observed a white heron alight at the water's edge and proceed slowly into the water.A foot at a time , so carefully placed so as not to alert the fish.We knew there were two crocs just a few metres away.Did that heron know also?The tension mounted as one croc slowly moved nearer....no visible movement....just like a drifting log....would it get within striking distance?Cameras silently rolled as each of us saw this drama unfold.No sound or movement from any of us...just a silently drifting 'log'...and a heron so carefully placing one leg at a time in front,intent on catching it's supper...and a croc intent on catching it's, gliding closer....ever closer...not a ripple breaking the surface.
Would we catch the strike on camera? We all held our breath as we watched a drama played out in this paradise of a natural setting.
Then the heron walked the other way, and the croc gave up! Tension lifted and I guess we were all quite happy the heron survived. 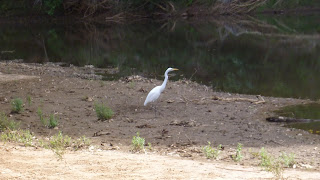 And I'm thrilled salties have survived their past persecution.They are dangerous.They will go for the unwary.Authorities now reckon that since the ban on their killing and trade in their skins , numbers have recovered to over 60,000.But they are after all part of this natural world.Loss of apex predators such as these can have unforeseen and unwanted effects on eco-systems that have developed around them.Awareness, and respect of the dangers they present is the key.And for we Kiwis, coming from a country where we can walk our forests without fear of a bear lurking,or swim in our lakes and rivers  not having to think a saltie  may be about to strike,and walk  through knee deep grass and  not worry that there could be a snake  hidden there,to sink it's fangs in our ankles , having to constantly remind ourselves of these dangers, is ever on our mind.
.

Labels: The Extraordinary Taxi Ride
Email ThisBlogThis!Share to TwitterShare to FacebookShare to Pinterest