Our experiences watching crocodiles in the Kimberley while on our Extraordinary Taxi Ride reminded me about the sad situation we encountered in South Africa, up at Imbambala Wilderness Trails Camp situated in Loskop Dam Nature Reserve.
It's a beautiful part of South Africa, and Imbambala is a great place to game view, and I wrote about our rhino incident here- rhino incident

Prior to travelling to SA, I had been researching our trip and the Loskop Dam area on an online forum for SA National Parks. It's probably the best forum I have come across for the wealth of information on all sorts of wildlife, plants, and the whole range of traveller facilities available throughout all the National Parks in SA. Take a look here- SA Parks Forum . I really like the ambience of the forum, and the helpful and welcoming tone of all the members. There is a thread on whatever animal, insect or plant you could think of. It's a credit to the administrators and members alike. Well done!

I was briefly reading a thread regarding the deaths of crocodiles in the Olifants River system in Kruger Park and it had perked my interest - croc deaths so I read the full thread mentioning over 30 deaths, and followed the link -Media release on crocodile deaths. 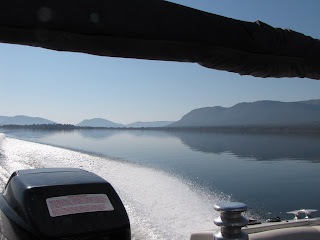 Then thought very little about it until the day we were power boating across Loskop Dam towards our stay at Imbambala, late last July.Colin ,our host gave us an interesting run down on the reserve and the lake, then he mentioned that the Olifants River flowed through the dam.So I asked him about the croc deaths in the river further down in Kruger, and he was very aware of the problem.The fish in the dam are dying.In one bay he reckoned they pulled from the water 21 tons of dead rancid fish!Cause of the fish deaths is thought to be contaminated water because of mining run offs flowing into the upstream rivers. water report The report at that link is more specific as it cites changes in the phytoplankton "We think there may be a possible link between two phytoplankton species that we found in the lake, and which interact with the aquatic ecosystem foodweb". And that change may have been the result of mining run off upsetting water quality.Or it may be because new types of phytoplankton have been introduced and found conditions ideal for a bloom to occur.It is a popular recreational lake for boaties, and new organisms can be introduced on boats or their gear.Now in New Zealand we're facing an ecological disaster in our once pristine rivers and streams from Didymo,rock snot thought to have been introduced into the country in anglers gear, quite probably their felt soled boots.I've had a very strong interest in this , not just as a keen amateur biologist but from the perspective of my trade as a custom shoemaker.I am often asked to remove the felt soles from expensive wading boots and replace with a non-slip rubber sole.Felt soles have been banned to try and limit the spread of the spores further. 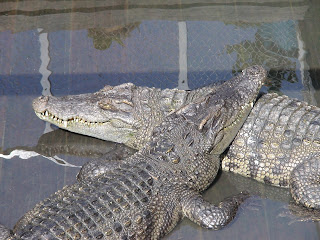 But back to crocodiles.It is thought the deaths of crocs is because they feast on the dead and often rancid fish, and this then causes pansteatitis in them, causing their fatty tissue to harden to a degree where a crocs mobility is so affected they can no longer move to catch prey and they starve to death.Crocodylus niloticus  or  nile crocodile doesn't stand much of a chance.
And nor does the associated river systems reaching right across Kruger National Park, South Africa's greatest wildlife treasure.It needs concerted action here to stop this ecological disaster getting worse.

An epilogue to this post concerns this photo nearby of two crocodiles.I couldn't find the Nile croc photo we took down towards St Lucia in South Africa, so many to go through , so I posted this photo of two Siamese Crocodiles we photographed in a cage while travelling in Cambodia, Jan 2007.
Read here. Critically endangered Siamese Crocodiles
Read about the virtual elimination of this species from the wild in SouthEast Asia.Sadly hunted to near extinction for it's skin which is of the softest of all the crocs.Sure, 1,000's exist in croc farms, often in appalling conditions and killed and skinned inhumanely.All for the sake of fashion.I suggest the only redeeming feature of croc farms is that at the very least they have kept the Siamese Crocodile  from absolute extnction.And the loss of any one animal species is sad for our biodiversity.
So all you out there wearing real croc shoes, and carrying a real croc skin purse, look what you're doing to this world! 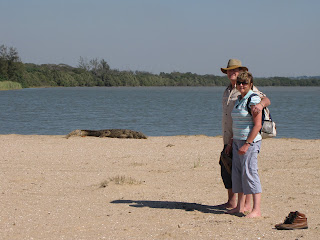 Oops, found our Nile Croc photo....
And just a point, we weren't silly enough to get up close to that croc!He's faster than we are.It's just the camera angle makes it look close.You gotta keep your distance, as they can cover ground so quickly.No way was I going any closer as my wife can run faster than me! 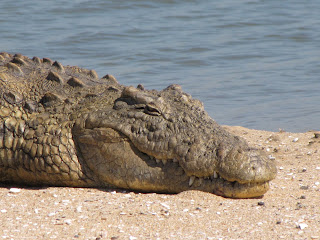 This just go to show how delicate our ecosystem is. Mess up 1 variable among thousands in the equation and the effect can be very pronounced.

I found your blog through your post on the Sanparks forum. Your photo reminds me of the photos I took at St. Lucia of fishermen at the waters edge with large Crocs laying nearby. I hope that the SA government is abel to sort out the Croc death problem satisfactorily.

Thanks Normana,
I'm hoping to find updates to the situation.Africa Geographic commented that they are concerned with the situation also and may research it for an article in that mag.