Unfettered by not needing to write to an editor's expectation or a publisher's style or format, sometimes the weirdest journeys are undertaken by writers who then allow their imagination to soar or explore different ways of telling a story or expressing concepts. When I crafted a few lines together little did I know that my poetry would end up as a song on YouTube and played on Radio in South Africa and the USA!

Last year I was supposed to be progressing through a travel writer's course. Many people like myself sign on with the hope of eventually making it through and breaking into being a published travel writer, hopefully creating a career and earning an income: I don't have that as a motivator.

Prior to signing on, a friend told me it wasn't for me: "You should look at a Creative Writing course." A few weeks into it, I realised Red was right! While it was an excellent course for its stated purpose and objectives aimed at anyone who wants to become a successful published travel writer, I found the course was too narrow for me. Not many editors consider poetry a suitable style for destination travel writing: little wonder there's so many boring travel publications out there. Back then poetry had raised its tentacles and grasped my mind and took over my imagination as an unrealised and unknown need found expression. I had to explore this completely new field! I found it far more exciting. 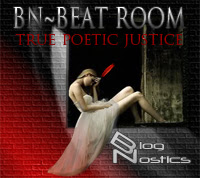 So it was that my simple attempts at poetry -although feeble at first- were noticed by a few bloggers in various groups I was invited into: they wanted more. Thanks guys!
Interesting to note, my second poetry attempt has had over 4,700 reads.
Song of the Tui.

I knew I had to write about ''RED".
Red eyes tell us when someone has been crying; red also signifies blood; and if you have seen the glory of an African sunset you'll never forget Nature's display of reds and fiery oranges! All these ideas I knew I could bring together in a simple poem.

Much of the inspiration for those lines came from this photo taken in Chobe National Park, Botswana, May 2011.
The early evening sunset on the Chobe River shone Darth Vader's light sabre across the water, captured by my Canon SX10is on ''Sunset" setting.  I took dozens of pics of this stunning display. 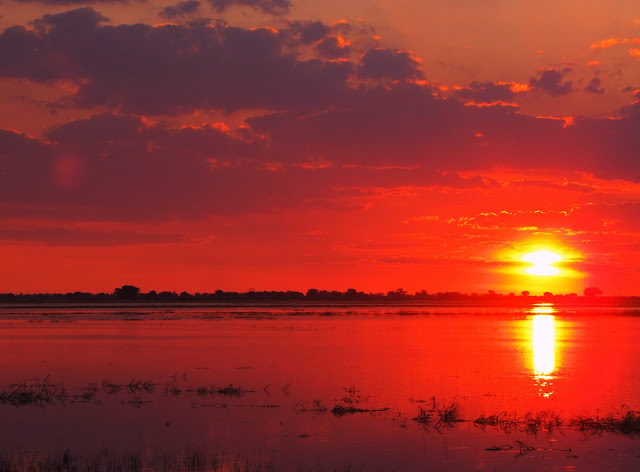 There is an ongoing tragedy escalating in its intensity for Africa's wildlife.

1. Rising demand in Asia, particularly China and Vietnam is fuelling poaching of much of Africa's animals: rhino and elephant are being very badly hit.

2. Loss of wilderness areas as the human population grows; each new family needs its plot of land to grow meagre crops or graze their cattle. Eradication or control of tsetse fly (the sleeping sickness carrier) while a boon for mankind means death for wildlife as it allows cattle to be pushed into areas where up to recently the fly has been valuable in keeping man and cattle out of.

3. Trophy hunting of lion. Usually the best trophies taken are the male in his prime just when he's taken over the pride and fathered the new generation of cubs. Shooting the pride male means a younger male will take over, and he will kill all the cubs sired by the previous male to ensure lionesses come back into heat so the new alpha male's genes are passed on. A trophy kill of a pride male leader is not just 1 lion killed, but is a death warrant for many young cubs also. Lion population in Africa has dropped from an estimated 200,000 in the 70's to less than 20,000 today.
How many nations and organisations use the symbol of the lion, the king of beasts to project power and courage? Don't they realise it's a doomed beast?

3. Rhino are under threat of extermination in the wild and some specie will be lost to us if escalating poaching is not brought under control.

5. There is now a growing problem with Carburofan poisoning of carcasses. A poor local cattle or goat herder wants to kill any predators, like lion, cheetah or leopard. A poisoned-laced carcass attracts and kills predators, and the scavengers of their carcasses also. It is cheap, and undiscriminating.

All these issues I sought to encapsulate in these words-

Africa's red sun is crying,
As its blood seeps out around.
Its wildlife is dying
As man spreads across the ground.

A hunter pulls the trigger,
At a lion's roaring sound.
A once majestic tawny beast,
Struck by that killing round.

Africa's red sun is crying,
As its blood drips on the ground.
The symbol of all that was proud and strong,
Now nowhere to be found.

A poacher drugs a rhino.
Can you hear that dreadful sound?
The chainsaw roars, into its skull it bores.
Another horn is China bound.

Africa's red sun is crying,
As its blood flows on the ground,
As its mother dies, the baby cries.
Another elephant brought down.

A herder poisons a carcass,
Leaves it lying on the ground.
Very soon, the grass is strewn,
Dead wildlife all around.

Africa's red sun is crying,
As its blood floods o'er the ground.
When will we find the place and time,
To share Nature's playground.

I shared the link to Africa's Red Sun - http://blognostics.net  to a few wildlife conservation groups on Facebook. People liked it- one site had over 50 onward shares!
Vin Gallo, a musician from South Africa took up the words I sent him, created the music -which was amazingly close to how I was singing it to myself!- and posted to Youtube this incredible video.

Where this song goes from here- well who knows?
It's been an unusual journey!

Help protect and conserve rhino here-
Save our rhino on Facebook

Jim once more you have captured my attention and heart in the chaos I live in. Wonderful post, I love the poem, I love your photos and I love your work with the animals and their preservation. Thank you. I will pass this around as much as I can.

Keep the poetry coming, a creative writer can write about anything.

Loved your poetry Jim. You should write poems more often

Dear Jim,
You are such a noble soul!

Jim you are truly a man for all seasons. Congratulations on your poem.It is written beautifully and for such an important and noble cause!! Tonight at dinner I'll raise a glass of red to you!!!!

The sun is beautiful, the poem is more powerful.