On Budget Travelers Sandbox Nancie has a great picture up for Travel Photo Thursday.
"Myung Mai Market here in Chiang Mai. We were standing and admiring the beautiful light being cast through this umbrella when this shadow appeared and a wonderful photo opportunity presented itself."

Go and have a look at the photo, and like me you may be fascinated by how the light at a certain time of day, or the angle, or as it shines through fabric can create an unbelievable effect.

So here is a favourite photo from our India travel in 2006, taken on my old Sony Cybershot, at about 2 megapixels. I was following the group as we clambered along the riverbed in Orchha, across from the Orchha Resort Hotel where we stayed. Late in the evening, with the sun getting very low. As we walked, I could see this fascinating low backlighting become more pronounced behind the temples, so I waited until the last of our group were well in front then took the shot.
Low light photography can be difficult but sometimes reveal great treasures.
Check out the other linked Travel Photo Thursday sites for some more interesting travel photos.

I think this has a ''Hobbit'' or Lord of the Rings feel about it.

We found this guy sitting on a rock later on. 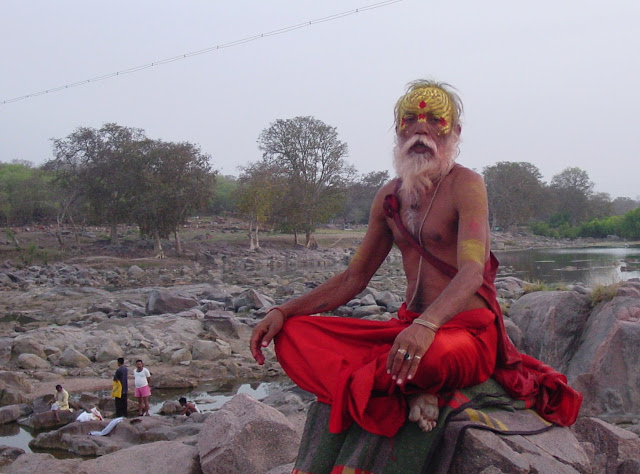 What a majestic photo. love the lighting! Hey is that pop?

It looks absolutely fine for me Jim. In fact, it's beautiful....Wonder what that man is up to on the rock? Hmmm... Maybe just posing for a nice shot from you... no wonder he looks like he's having fun!:)

Jim,
Great shots and understanding of low light photography. I was here earlier today and sometimes Mr. Google won't let me comment. Probably a gremlin in my laptop.

Simply breathtaking Jim! How wonderful it must be to have seen these sights. I will see them through your eyes:)

I am so glad to see my country here. A warm and fuzzy feeling, you know. Jim, you may be having bag of stories to narrate from all those wonderful journeys you have undertaken. I am awaiting many many such pictures and stories.

Madhya Pradesh has many many deep secrets for writers and photographers alike - thrilled to see this - wonderful work JIm!

Thanks Mike, I've got a lot to learn about photography, but low light scenes fascinate me, because the scene completely changes. You'll note the photo I use on my header, taken as the sun set in Namibia and the whole landscape took on an unreal coloration.
Hi Kriti, Susan and mary, just hold my hand and I'll take you to many places. India we love. Been twice and we're thinking to go again. Got a village in Jharkhand State we need to visit, again.

The lighting effects are awesome -- love the photos, Jim. The colors in the photo of the man on the rock stand out so vividly.

Stunning photo, Jim. What a capture! Beautiful blog! Looking forward to traveling vicariously through you!

The photo is awesome. Low lighting produces all types of magic (and hassles that need to be overcome for a good shot). It always brings a bit of mystery and gives a sense of quiet peace. That guy on the wrong looks happy - what is his secret?

Loved the photos Jim, thanks for sharing

Thanks everyone. So glad you liked the main shot of the temples. The swami or priest on the rock I couldn't resist the temptation to include that.
Cathy, that old Sony Cybershot camera I loved the way it really threw out colour in every shot. That photo is not retouched apart from tweaking the contrast and even in the evening light, the colours are thrown out so brilliantly. I miss that camera but could only shoot up to 3 megspixels and size of a brick.

Jim, I love your work and the way you see the world. Everytime I visit your blog, I see something that lifts my heart, makes me smile, makes me ponder deeply. I always come away changed for the better. I also continue to promise myself a really nice, professional camera in the near future so that I can indulge my own (admittedly amateur) photography craving. :)

Is that guy a Sadhu? Saw a lot of 'em in Nepal.