Our kids.... baby elephants at the David Sheldrick Trust, Kenya

Our safaris in South Africa and brief wildlife volunteer experiences in Namibia have left us with a concern and deep sense of frustration over the future of wildlife in the African continent .There is a war against wildlife ( it's genocide on an ever increasing scale!)  being carried out by very organised poaching syndicates, fuelled by the rising demand for ivory, rhino horn, and even lion parts by Asian countries, principally China. National Geographic.photogalleries,elephants massacre

So, having a passion for wildlife , and particularly elephants after my desert elephant experience with EHRA in Aug 2008, I figured that there is one thing I can do that will help make a difference, and that is publicise their plight. And I could do this by taking any opportunity to bring worthwhile organisations to the public, hence I started this blog. We have a lifetime of travel experiences, and hopefully by telling our stories we could build a site that not only promotes conservation issues  but may earn a few dollars that we can donate back where it counts. And anyone else can also.

Have you ever thought about adopting a baby elephant?
The  David Sheldrick Wildlife Trust near Nairobi Kenya rescues baby elephant and rhino and releases them into controlled wild areas wherever possible. Explore the David Sheldrick link and read some of the heartbreaking stories of baby eles being found suckling on it's dead mother's teat after poachers have shot and killed her,chainsawing off her face to release the tusks! Don't shy away from reading the stories on that site, most are of dedicated people working wonders in their care for these beautiful creatures. This is one of the succesful organisations working against great odds, purely on our donated money at the coalface of wildlife protection.
Think about getting involved, a small donation may save another baby elephant or rhino.

We have adopted two so far. There will be others.
Here is our first baby- Turkwel on the left having a mud bath. 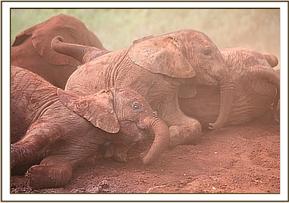 And here is Shukuru  (left) playing with friends.
I'm copying an excerpt from a recent newsletter from the Sheldrick Trust so you can all read about the highs and the lows in the valuable work these people carry out.

"Nursery:- The loss of Mawenzi on the 8th was a devastating loss for us all, since she had been with us for almost 2 years and was a great Nursery favourite who will be missed sorely. Two other elephant rescues during the month also proved fruitless – the first a 2 year old from Sagalla Ranch abutting Tsavo who died the night after arrival despite being on life support. The trauma of losing his elephant family plus capture proved too much for this baby who, deprived of his mother’s milk, was already too damaged to be able to retrieve. Similarly another 2 year old orphan brought into Tassia Lodge died as the Rescue plane was taking off, so the rescue had to be aborted.


Good news is that Murka’s body wounds are all now healed and the spear hole in her forehead is also healing well, although she is still unable to take water up into the trunk, even though she uses her trunk to feed. Obviously the suction ability of the trunk has been compromised by the terrible damage inflicted by the spear, but we are hopeful that Nature will work its wonders in this respect. She is out and about with the other orphans now, delighted to be out of the confines of her stockade, and much to everyone’s relief, behaving impeccably at the noon mudbath in front of all the human visitors. Having been so fearful and aggressive, she is now beginning to trust and love the Keepers, actually coming up to them and sucking their fingers. She is turning into a gentle and loving little elephant. Mutara adores her, and is never far from her, always there to comfort and reassure with all the makings of a wonderful Matriarch when older. Likewise Kudup, who is a very caring and loving Nursery member.
Makireti and Kandecha, the other recent arrivals have settled in well, both firm friends of Murka, all three elephants still grieving for their lost elephant family. However, Kandecha is now beginning to respond to the challenges from pushy little Chemi Chemi who never tires of making his presence felt amongst all the others. Kandecha can now give him as good as he gets, and is even beginning to enjoy playing pushing games with Kibo which is a sign of mental recovery.
Sities remains the darling of all the Nursery females, and is a mischievous and endearing little character who reminds the Keepers of Lempaute and Wendi. Tano is her best friend amongst the Nursery babies and Suguta seems to have won the position of her favourite Matriarch over and above Olare. Sities entertains the mudbath guests by running up and down the cordon so that they can touch her, and relishes scaring the African school children, most of whom have never set eyes on an elephant before, and run off screaming when she puts out her ears and gives them a mock charge! Kalama likewise has developed a special trick to attract the attention of visiting foster-parents in the evening. She puts her front legs on top of the stable door and invites attention by looking out over the top, encouraging visitors to fondle her face. Shukuru gets the prize for being the best sprinter – way ahead of all the others at every milk feed!"

So our little Shukuru is top sprinter. It 's fun getting these newsletters, and reading about 'our' babies progress. I've had up close encounters with elephants and gained an admiration for these creatures. Probably the most intelligent, most family sociable and sensitive of all land mammals.

This post is just to aquaint my readers with why this site was set up. Keep tuned in, we'll talk about a lot of travel to weird and wonderful places, and we'll look at a few conservation issues along our journeys. And if you too want to adopt a baby ele or rhino, let me know.Or follow this link-Fostering at Sheldrick Wildlife Trust. 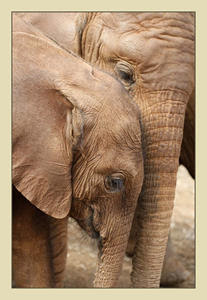 Our kids.... baby elephants at the David Sheldrick Trust, Kenya

oh sooooooo cute, but they are smelly hahahah

Ah so you did get there!Where's a report Angela.

Awww, you have such adorable babies! I have only saw one elephant in my lifetime and that was "Susie" at the local zoo, in Independence Kansas, she wasn't very friendly, probably because of her living conditions!!

I think it's great that you are spreading the word about these causes and organizations, and let people know about the conservation issues that are currently happening around the world. Kudos!

The baby elephants are really cute!

This is very interesting. To answer the question you ask above - no, I haven't thought about adopting an elephant. But after reading this, I'm going to think about it and check out the Sheldrick site!

Thanks Norbert.And everyone's comments are really appreciated.I'll keep everyone up to date with what's happening with our babies.

They are so cute! I clapped a baby elephant in Thailad which was an amazing experience. Elephants fascinate me very much and I admire their sense for community.

What a wonderful program, you writing gave me chills. I would also love to know what happens with the "kids".

i have been to David Sheldrick Wildlife Trust the place is awesome they have so much love for elephants. great post